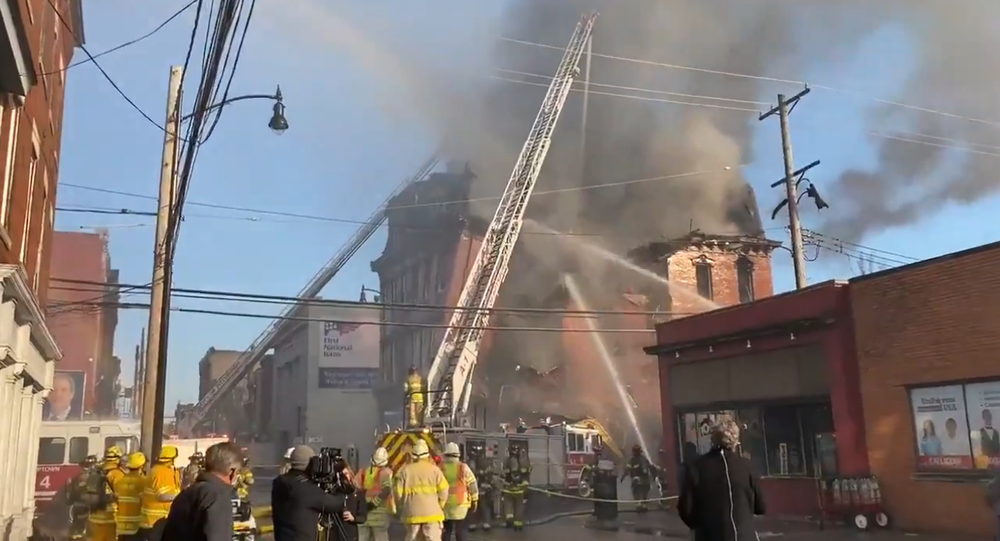 There has been no information on any casualties resulting from the fire on Pittsburgh's East Carson Street, where an old commercial building became engulfed in flames on Monday. The fire could be seen across the Pennsylvania city.

A massive fire erupted in Pittsburgh, Pennsylvania, on Monday, engulfing an old commercial building located on East Carson St. between 10th and 13th in flames and causing its walls to collapse, as firefighters struggled to contain the fire.

Pittsburgh Public Safety urged citizens to avoid the scene, adding that firefighters have classified the fire as "four-alarm".

CBS Pittsburgh reported that in the 4-story building, there are the South Side Chamber of Commerce, located on the ground level and, according to Google Maps, a barbershop that is closed on Mondays.

According to the report, firefighters initially went into the building and up to the third floor in an attempt to smother the flames, but as the fire got out of control they were called out to combat it from the outside.

Videos shared online show the walls of the building collapsing, engulfed in flames.

#BREAKING: A side of the Southside Welcome Center on East Carson Street in Pittsburgh has collapsed due to a raging fire.
📹: @NicoleFordTV

#Pittsburgh
Aerial view of scene at the major 4-alarm fire with Mayday in Pittsburgh.

​​Some users shared photos online outlining that the fire was visible from across the city.

There were no reports on deaths or injuries caused by the incident.