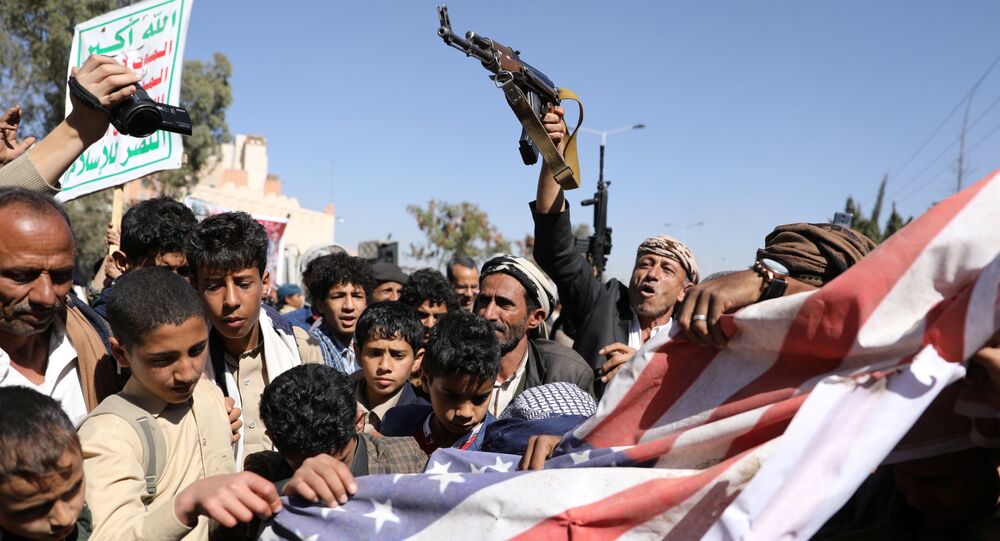 US to Keep Up Pressure on Yemen’s Houthis - State Department

On Friday, media reported, citing US officials, that the administration of President Joe Biden had formally informed Congress it would remove the Houthis from the US foreign terrorist organizations list.

"We will certainly keep up the pressure on the leadership [of the] Ansarullah movement, on the Houthis," Price said.

Price accused the Houthis of being "maligned actors" that have inflicted suffering on the Yemeni people.

The Trump administration added the Houthi movement to its list of foreign terrorist organizations days before the end of its tenure. The leader of the movement, Abdul-Malik al-Houthi, his brother and military commander Abd al-Khaliq al-Houthi and another Ansar Allah commander, Abdullah Yahya al-Hakim, were listed as global terrorists.

Last week, the Biden administration reportedly informed Congress it would remove the Houthis from the US foreign terrorist organizations list.

"The United Nations welcomes the US intention to remove Yemen's Houthi movement from the US list of groups designated as foreign terrorists," UN spokesman Stephane Dujarric said on Saturday.

The State Department spokesperson also noted that the United States would seek ways to improve its support for Saudi Arabian efforts to "defend itself."

"Saudi Arabia faces genuine security threats from Yemen which we again saw over the weekend," Price said. "We will look for ways to improve support for Saudi Arabia’s ability to defend itself on its territory against threats."

Price said it will be considered during the interagency process of future potential weapons sales to Saudi Arabia.

Earlier, the US Central Command (CENTCOM) chief, Gen. Kenneth McKenzie, said the United States will continue sharing intelligence with Saudi Arabia to help Riyadh address security threats, but will halt support for any additional offensive operations by the Saudi kingdom in Yemen.

Biden also vowed to step up diplomatic efforts to solve the conflict by peaceful means and appointed veteran diplomat Timothy Lenderkin as his special envoy to Yemen.

On Friday, the Saudi Foreign Ministry said it welcomed the United States’ stance to help resolve the crisis in Yemen by political means.

Yemen, the region's poorest country, has been engulfed in an armed conflict between the government forces led by President Abd Rabbuh Mansur Hadi and the armed Houthi political opposition faction for over six years. Yemen's president in exile is backed by a military coalition of Arab countries led by Saudi Arabia.

In mid-December 2020, Hadi, who currently lives primarily in Riyadh, announced the creation of a new power-sharing government consisting of 24 ministers, in line with the terms of the Riyadh peace deal concluded with Yemen's separatist Southern Transitional Council (STC) in November 2019. The new cabinet is supposed to sit in the temporary capital of Aden, as the official capital of Sanaa has been under Houthi control since September 2014. Under the agreement, the STC will also return military facilities and state institutions seized in southern Yemen to the Hadi government.

Lavrov: US Plan to Label Houthis as Terrorists Can Have Negative Impact on Situation in Yemen

UN: US Plan to Blacklist Yemeni Houthis May Cause ‘Humanitarian and Political Repercussions’