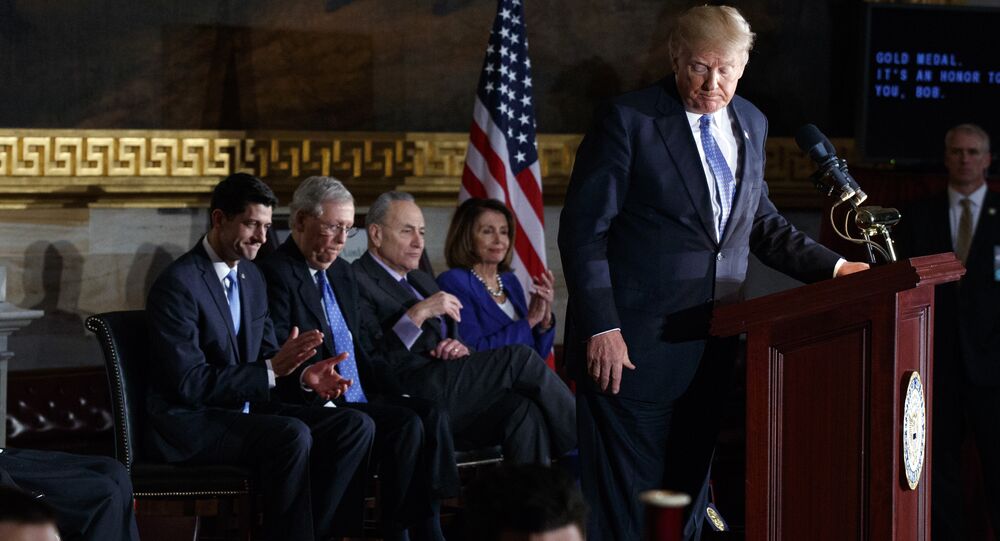 The Democratic Party-held House of Representatives impeached former President Donald Trump last month on the charge of "inciting insurrection." His Senate trial is set to commence on Tuesday. Trump is the first commander-in-chief to have been impeached twice, and will be the first to be tried by the Senate after leaving office.

Lawyers representing former President Donald Trump have filed a 78-page brief attacking Democratic lawmakers, demanding that what they say is an "unconstitutional" "political theater" of a case be dismissed.

"During the past four years, Democrat members of the United States House of Representatives have filed at least nine (9) resolutions to impeach Donald J. Trump...each containing charges more outlandish than the next," the brief suggests.

"One might have been excused for thinking that the Democrats' fevered hatred for Citizen Trump and their 'Trump Derangement Syndrome' would have broken by now, seeing as he is no longer the President, and yet for the second time in just over a year the United States Senate is preparing to sit as a Court of Impeachment, but this time over a private citizen who is a former President," the document adds.

Accusing the House of "obfuscating the facts" about the events of 6 January, the brief claims that Trump's speech before supporters in Washington, DC that day did not feature "any reference to or encouragement of an insurrection, a riot, criminal action, or any acts of physical violence whatsoever."

The brief further alleges that "Democrat members of the House drafted the article of impeachment" against Trump "before any investigation into the riot had even started," and that they "publicly admitted" to doing so.

The former president's lawyers go on to suggest that the Senate "lacks" the Constitutional authority to carry out an impeachment trial of a former president, and argue that senators are "being asked to do something patently ridiculous: try a private citizen in a process that is designed to remove him from an office that he no longer holds."

© AP Photo / Win McNamee/Pool
House Democrats Reject Trump's 'Unconstitutionality' Defence in Impeachment Trial
The brief goes mentions the case of William Belknap, the Ulysses S. Grant administration Secretary of War who was tried by the Senate on corruption charges after his impeachment and despite his resignation in 1876. Democratic lawmakers have argued that the Belknap case serves as precedent giving the Senate the right to try Trump. The former president's lawyers call that case, as well as that of the 1797 impeachment of Senator William Blount, as "inappropriate" and insufficient to "provide any binding presidential authority for impeaching a former President," given that neither of the men were convicted by a two-thirds majority.

"This impeachment trial is being pursued solely to preclude Mr. Trump, a private citizen, from holding any future office. However, the Constitution does not provide for the impeachment of a private citizen who is not in office," the brief argues, suggesting that Trump became "impervious to removal, and therefore to impeachment and trial by the Senate," the moment he left office on 20 January.

The former president's lawyers warn, citing legal opinions, that a trial of Trump would put the Senate on a "slippery slope" which could lead the party that controls Congress to move to impeach other former officeholders from the minority party in the future.

© AFP 2021 / POOL
Rand Paul Says There Is 'Zero' Chance Trump Will Be Convicted, Slams Impeachment as 'Farce'
Finally, attorneys argue that House lawmakers' case is a violation of Trump's First Amendment Rights, which guarantees the right to freedom of speech and freedom of peaceful assembly.

The Senate impeachment trial of former President Donald Trump will begin on Tuesday. He is widely expected to be acquitted, with the 2/3 vote needed for conviction considered extremely unlikely in a Senate split 50/50 between Democrats and Republicans. Last year, in his Senate impeachment trial on charges of abuse of power and obstruction of Congress, senators voted 52-48 and 53-47 to find Trump not guilty of the charges, respectively.