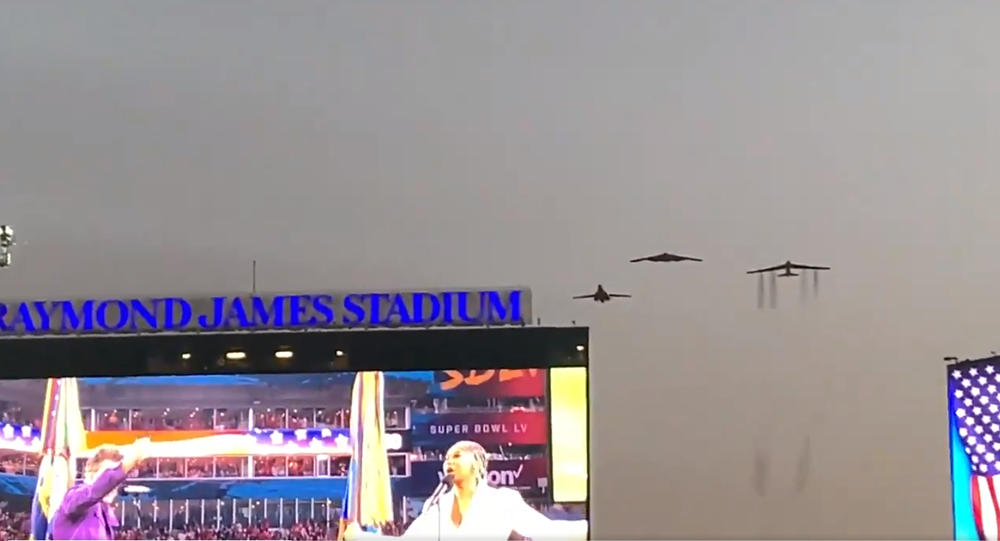 Super Bowl LV took place at the Raymond James Stadium in Tampa, Florida on Sunday night, with the Tampa Bay Buccaneers thrashing the Kansas City Chiefs 31- 9. Ahead of the game and behind the scenes, the National Football League was coordinating with the US military to stage a unique spectacle.

Football fans packed into Raymond James Stadium on Sunday night were treated to a flyover by three US strategic bombers, including a $2.1 billion B-2 Spirit, a B-1B Lancer, and a B-52 Stratofortress, with the numbers in their names adding up to 55, or Super Bowl LV.

The flyover, which took place just before kickoff as singers Erich Church and Jazmine Sullivan sang the final note of the national anthem, required pilots from three separate bases – Whiteman AFB in Missouri, Ellsworth AFB in South Dakota, and Minot AFB in North Dakota, to join up over the Gulf of Mexico, just outside Tampa airspace, before proceeding to the stadium at just the right moment.

The bombers flew in formation over the stadium at about 300 mph (about 480 kmph), with the total flight time lasting anywhere from seven to nine hours, including meeting up with a tanker to fuel up mid-air.

Col. Ben Jonsson, commander of the 6th Air Refuelling Wing at the MacDill Air Force Base in Tampa, Florida, said he hoped the flyover would bring “great strength to the American people.”

The US Air Force has about 20 B-2 bombers, 62 B-1s, and 76 B-52s in its inventory. Throughout the years, these aircraft have been used in bombing missions in countries including Yugoslavia, Afghanistan, Iraq, Libya, and Syria, with the B-52s old enough to have taken part in the bombing of Vietnam as well.

The bomber overflight was unusual in that normally, fighter jets are used at major US sporting events. The Air Force considers such flights “time-over-target training,” meaning that they do not cost taxpayers anything extra beyond the hundreds of billions of dollars already laid out for defence every year.

‘I’d Rather Have Health Care’

Online, social media users were divided on reaction to the bomber flyover, with some calling the event “bad ass!” and “beautiful” and lauding the pilots as “true American heroes” while others quipped that they’d “rather have healthcare” and suggested the whole thing was a waste of money.

The discussion soon degenerated into historical debates and memes.

Wish we had one of them hydrosonic missles

Now imagine if those airplanes dropped bombs on you and your family as they fly overhead.

Imagine if your wedding was bombed.

The sight of them would be a terrible thing.

As Martin Luther King said, “this way of settling differences is not just”:pic.twitter.com/nmyhoxwvhN