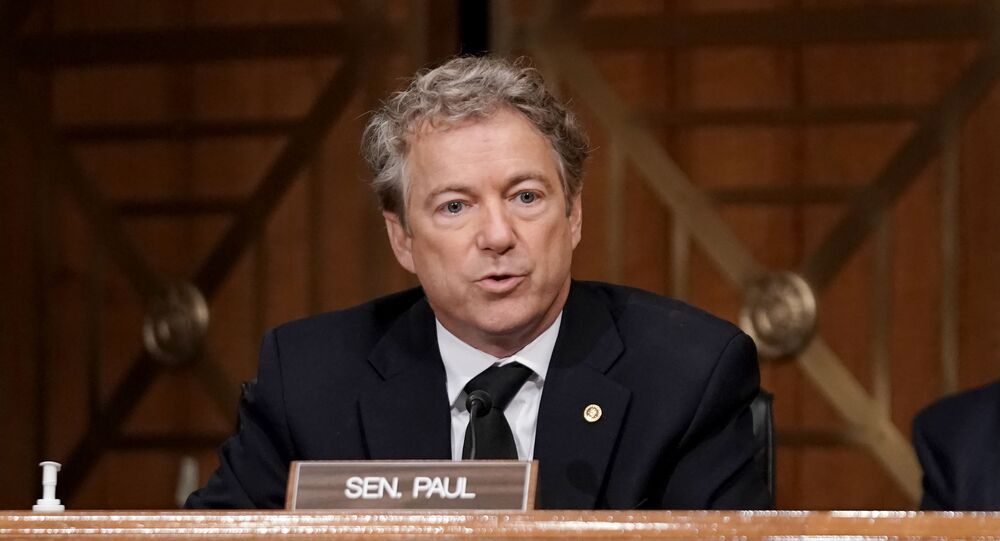 Rand Paul Says There Is 'Zero' Chance Trump Will Be Convicted, Slams Impeachment as 'Farce'

Trump’s second impeachment trial is the first to be held after him leaving office. Trump is the first leader in US history to have been impeached twice, this time for "incitement to insurrection" in the wake of the siege of the US Capitol on January 6 in a bit to prevent Joe Biden’s presidential win certification.

Paul pointed out that he rejected the "misguided notion of voting to overturn the election either with Congress or the vice president" that Trump promoted, but the former president still will not be convicted since "45 Republicans have said it is not even legitimate proceedings."

"So it is really over before it starts," Paul said in an interview with "Fox News Sunday."

According to Paul, using the same logic as those who are pushing for the trial, Democratic politicians, like Senate majority leader Chuck Schumer, should also be prosecuted for "political speech".

The "inflammatory wording" in favor of impeachment, along with the "violent rhetoric" of Chuck Schumer was "so bad that the chief justice immediately said this kind of language is as dangerous as the mob who tried to invade the Supreme Court."

"If we're going to criminalize speech, and somehow impeach everybody who says, 'Go fight to hear your voices heard,' I mean really we ought to impeach Chuck Schumer then," he said. "He went to the Supreme Court, stood in front of the Supreme Court and said specifically, 'Hey Gorsuch, Hey Kavanaugh, you've unleashed a whirlwind. And you're going to pay the price."

One of the reasons the trial shall fail, the senator said, is the decision of Supreme Court Chief Justice John Roberts not to preside over the impeachment trial in the Senate, which underlines its partisan essence.

"Justice Roberts said heck no, I'm not coming across the street because you're not impeaching the president," Paul said. "This was a strong signal to all of us that this was going to be a partisan hearing with a Democrat in the chair, who's already voted for impeachment."

The Senate's president pro tempore, Senator Patrick Leahy, is supposed to preside over the trial instead.

Paul also compared the events in Washington, DC, for which Trump is being impeached, with the summer protests over the killing of African-American George Floyd, noting the antipodal assessment of the events by Democrats who condemned the protest of Trump supporters.

"We can't just have a double standard, both parties have to be treated the same. I think, if Democrats had any bit of self-reflection they would be saying 'this is a terrible idea'," he said, referring to the impeachment process. "People are going to have to judge for themselves ... are we going to potentially prosecute people for political speech?"

© REUTERS / LEAH MILLIS
Trump Should Run in 2024 in Wake of Impeachment as 'Martyr', Ex-Campaign Manager Says
As a conviction will require a two-thirds majority of senators, which is currently divided 50/50 between Democrats and Republicans, the former president is generally expected to be found not guilty again by the Senate.

Along with the impeachment trial, some Democrats are trying to keep Trump out of politics by using the Constitution's 14th Amendment, which forbids any person from holding public office who "engaged in insurrection or rebellion" or gives "aid or comfort" to US enemies. Trump's legal team has strongly denied all the allegations against him, stating that Trump urged the mob to "stay peaceful" amid the protests of January 6.