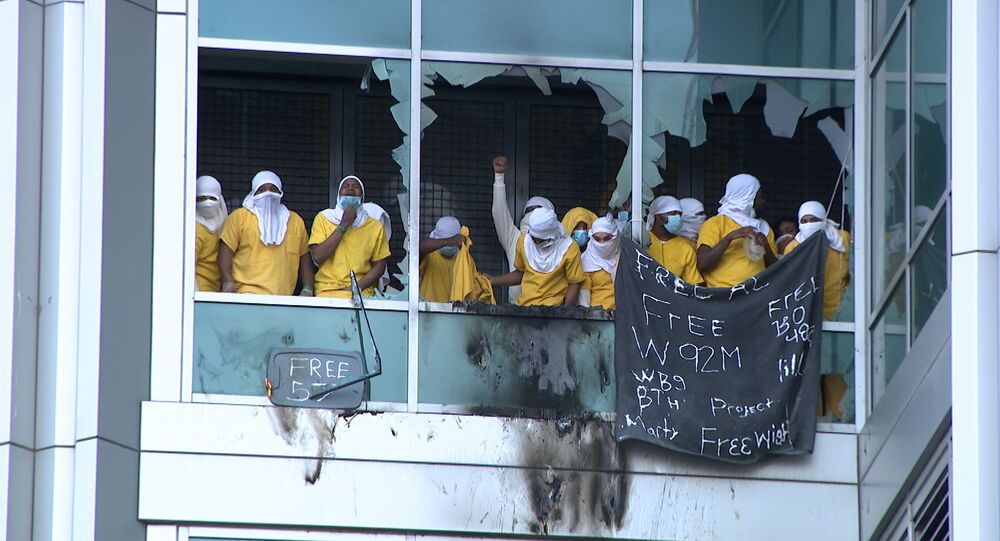 According to reports, after the two previous disturbances in late December and early January, hundreds of inmates were relocated from the St. Louis City Justice Center.

Inmates at a St. Louis correctional facility in Missouri started a revolt on Saturday, setting fires and tossing debris down on the street. It took corrections officers almost eight hours to regain control of the situation, the local KSDK channel reported.

The prisoners reportedly spent hours tossing tables, mattresses, and other stuff onto the streets, burning some of the objects.

Some windows were smashed by the inmates on the upper floor, as they were shouting and carrying banners. A fire could be seen in a broken window.

Fires are still being started. The fire department is trying to extinguish them. pic.twitter.com/5tlAopjyWr

PHOTOS: Police and firefighters responded to an inmate uprising Saturday morning at the St. Louis City Justice Center in downtown. The inmates broke several windows on an upper floor, set various items on fire and threw them out of windows. 📸 @DavidMueth

The unrest reportedly began at night, when a corrections officer got into a skirmish with a prisoner and was then jumped by other detainees. Then, the inmates were able to open their cells because the locks do not always click to lock.

"Even though our automated PA system would indicate that the cells are locked, they are in fact not locked and so other detainees were able to get out of their cells and into the unit," St. Louis Public Safety Director Jimmie Edwards is quoted in the report as saying.

Edwards also said that the inmates were able to get into the corridor and into a second unit, adding that they were "very violent and aggressive."

Inmates at St. Louis Justice Center have taken over at least part of the jail. There have been protests over COVID-19 dangers inside. Not sure if this is part of that. pic.twitter.com/roSCtkIHSK

To regain control, correctional officers used tear gas and had all 115 inmates involved in the riot back in custody, as the inmates eventually complied with their orders. An official added that a security guard was attacked in the chaos.

The detainees claimed that they were tired of the correctional facility conditions during the COVID-19 pandemic, as well as a set of regulations that restricted visits and delayed court proceedings. The officials stated there were no coronavirus-positive inmates at the facility.

​​The jail is located on the fourth floor of the Justice Center, with the only glass windows facing the city street and no fencing or other obstacles around the building.

No Regrets: Riots Were Justified, Says Palestinian Prisoner As He Looks Back At 2000 Intifada