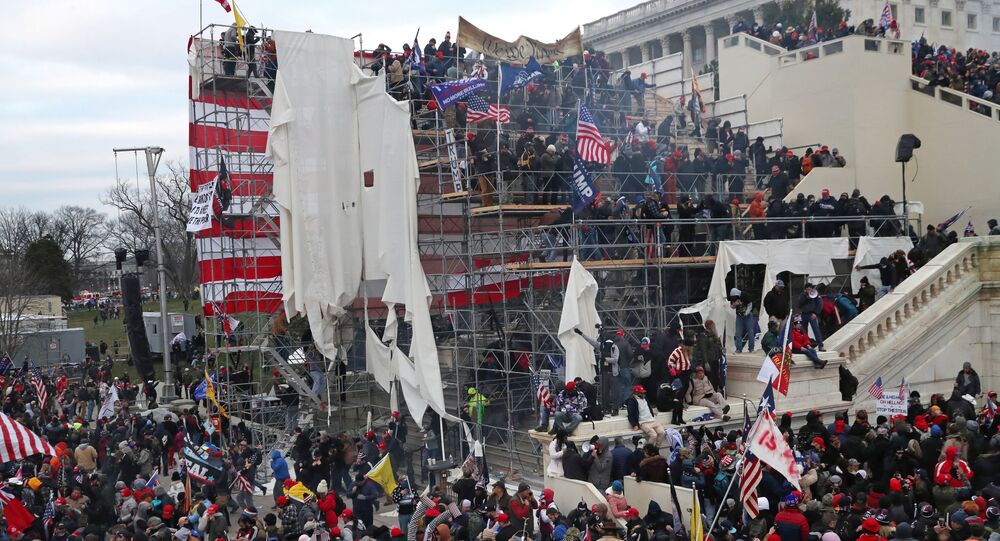 On 6 January, hundreds of Trump supporters stormed the US Capitol to stop Congress from certifying the results of the 3 November presidential election. The attack claimed the lives of at least five people, also resulting in widespread damage and vandalism.

American intelligence services failed to assess the situation and anticipate the violents events in Washington, DC, on 6 January, Steven Sund, former chief of the US Capitol Police, has claimed.

In a letter to House Speaker Nancy Pelosi, a copy of which was obtained by CNN, Sund pointed the finger at the Federal Bureau of Investigation (FBI), US Secret Service, as well as Department of Homeland Security and the DC Metropolitan Police Department for failing to predict an "armed assault" on the Capitol.

"The entire intelligence community seems to have missed this", he argued, in an apparent reference to the situation in the US capital on 6 January, when scores of supporters of then-US President Donald Trump breached the US Capitol in an attempt to prevent Congress from certifying Democrat Joe Biden's presidential election win.

Sund wrote that minutes after the rioters arrived at the western part of the Capitol, it was clear to him that the "situation was deteriorating rapidly" and that his agency didn't have the resources it needed to provide adequate security for the Capitol without outside agency support.

At the same time, he underlined that he doesn't believe "the US Capitol Police (USCP) failed", adding, "greatly outnumbered and against tremendous odds, they [the police officers] kept the members [of Congress] safe".

Sund also pointed out that he had asked two of his supervisors, appointed by Congress, for more help before the 6 January pro-Trump rally and that they said "no".

"I must add that I wish that before placing the blame on the USCP and on me as the Chief for the breach of the Capitol by an insurrectionist mob, more consideration would have been given to the impact of incomplete information provided by intelligence assessments, the denied National Guard request, and the subsequent delayed approval for National Guard assistance", Sund reportedly wrote in the letter.

Referring to the rioters, the ex-USCP chief noted that "this mob was like nothing I have seen in my law enforcement career".

"The group consisted of thousands of well-coordinated, well-equipped violent criminals. They had weapons, chemical munitions, protective equipment, explosives, and climbing gear. A number of them were wearing radio earpieces indicating a high level of coordination", Sund pointed out.

That was not the case with the US Department of Defence, which failed to coordinate with the National Guard, according to him.

"I still cannot fathom why in the midst of an armed insurrection, which was broadcast worldwide on television, it took the Department of Defence over three hours to approve an urgent request for National Guard support", Sund noted.

He purportedly concluded the letter by insisting that "what occurred on January 6th cannot be considered under any circumstances a protest, a rally, or civil disobedience".

"This was a well-planned, coordinated, armed insurrection at the United States Capitol. The USCP does not have the manpower, the training, or the capabilities to handle an armed insurrection involving thousands of individuals bent on violence and destruction at all costs", Sund underlined.

© REUTERS / JONATHAN ERNST
Pelosi Accuses Trump of Being 'an Accessory' to Murder Over 6 January Capitol Violence
The 6 January attack claimed the lives of at least five people, including a Capitol police officer. Then-President Donald Trump, via his now-suspended Twitter account, later urged his supporters to go home. He was then impeached for an unprecedented second time over accusations of "incitement of insurrection".

Trump's second impeachment trial in the US Senate, which he calls a "hoax" and a "witch hunt", is due to kick off on 9 February.