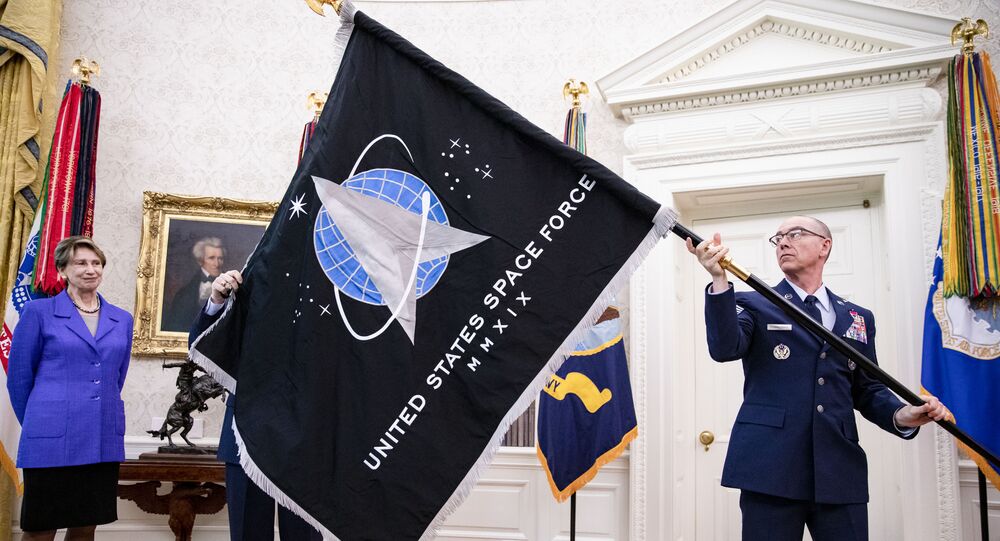 FloatyBois and Homo Spaciens: Check Out List of 400 Possible Nicknames for US Space Force Members

It turns out that many Americans cannot figure out the actual purpose of the newly created sixth branch of the US military, and these expressive nickname suggestions partly reflect this, including the simple and clear "I do not know".

US Space Force members could have been called "FloatyBois", "Space Marines", "Wookies" or even "Astrogators", according to a list published by Politico Friday, among a total of 400 possible nicknames submitted by military space personnel.

Before officials came up with a permanent name, similar to a soldier, sailor, airman, and marine, they used to refer to the members of the new military branch as "space professionals" in the first year of the US Space Force's existence.

It probably could have been much more amusing, since some of the nicknames suggested were "STARgeants", "Anti-Gravity Gang", "SFs", "Spacies" and "Nothings". And some are much geekier than the conventional "guardians", like "Daleks", "Stormtroopers", "Space Cadets", "Startrekkers" and "Paladins", among others.

Some proposals were apparently inspired by astronomy and the history of space exploration, suggesting names like "Astra", "Celestians", "Cosmos", "Homo Spaciens", and "Helion". Some apparently referred to the glory of Rome and proposed "Legionarii", "Vigils" - deriving from Vigilis "Guardian" in Latin - and "Gladiators", which, perhaps, would not meet Chief of Space Operations Gen. Jay Raymond’s requirement that the name for the space military personnel be gender-neutral.

It seems that many still confuse the civil space project of NASA with the national security focus of the Space Force, and a name like "Ground-Based Astronauts" or "Apollonauts", does not help, just as someone submitted a "Cosmonaut" nickname, which is already taken by Russian space crews.

In order to capitalize on how the military branch has a similar mission, some legislators reportedly wanted the service to embrace Navy ranks: to protect and defend American interests in an isolated and austere climate. The proposed names included mariners and sailors, in line with Navy heritage, already taken, of course.

And others apparently took the suggestion process too literally, or were too bored to think about it, submitting "nothing because you wouldn't hear it in space anyway."

The reaction on social media has been overwhelming, from people questioning why they were even searching for nicknames for a service branch whose purpose many Americans don't understand, to many complaining they actually missed out on some brilliant suggestions.

Why do we even have the Internet?

Other netizens seemed less enthusiastic about the new military branch, calling it a waste of taxpayers' money and some suggesting it should be called "Space Farce".

In December, former Vice President Mike Pence revealed that members of the new service would be named Guardians, which triggered torrents of lulz from netizens, who compared it to the Guardians of the Galaxy movies.

The Chief of Space Operations, General Jay Raymond, has argued that the military may not be doing enough in terms of PR, as he complained that many people do not realize why the US needs its own space force. He even recalled his mother asking whether he knew that the US Air Force and Space Force were dealing a lot with technology.

"I am very proud of the guardians in the Space Force. I see the value of this force each and every day," Raymond said. "I'm happy to talk to anybody about the great work and I'd welcome the opportunity."

White House Press Secretary Jen Psaki has come under fire for her apparently depreciating remark towards the US Space Force, as she dubbed it "the plane of today" while answering a correspondent's question about what future plans the Biden administration had for the new branch.

"The Space Force was passed with near unanimous support in Congress, the same type of 'unity' President Biden is supposedly working towards," top House Republican Rep. Mike Rogers commented. "Jen Psaki needs to immediately apologize to the men and women of the Space Force for this disgraceful comment."

Former President Trump's administration created US Space Force as a separate military branch in December 2019, with the force consisting of about 10,000 staff and 77 satellites. As proclaimed, its role is to "protect US interests" in the "next battlefield" against Russia and China's growing presence.