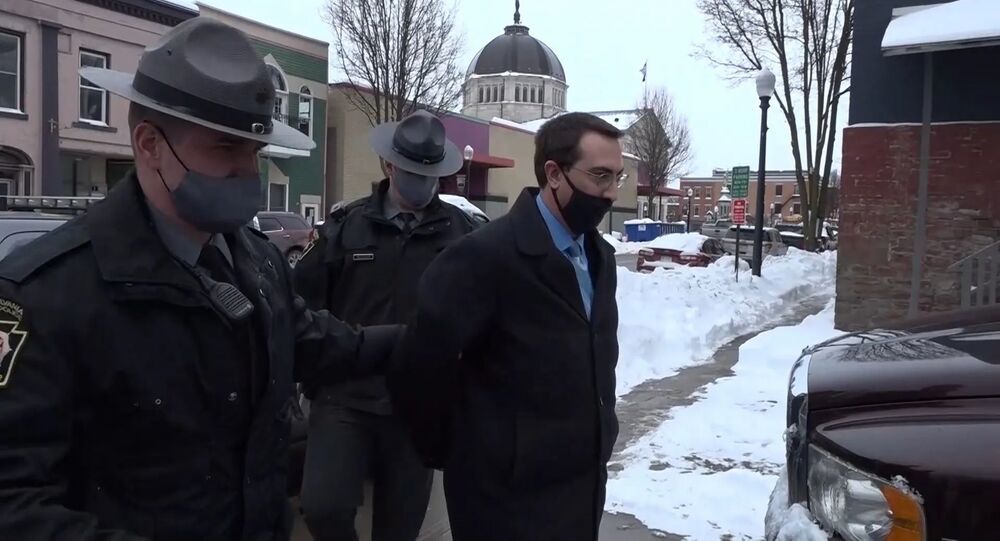 Some of the accused District Attorney's workers reportedly testified to seeing women leave his office in distress and that during his work in the private sector, their boss went to great lengths to conceal the violence. Witnesses have also claimed that to muffle the noises coming from his workplace, he would use music or a noise-canceling machine.

Chad Salsman, a district attorney for Bradford County in Pennsylvania, has been accused of sexually assaulting at least five female clients and trading legal services for sex with them, the local Fox News 23 channel reported.

On Wednesday, the 44-year-old prosecutor was handcuffed and charged with multiple offenses related to the charges.

In a statement that was transmitted on YouTube, Pennsylvania Attorney General Josh Shapiro said that three counts of sexual harassment, five counts of indecent assault, witness intimidation, obstruction of justice, and promotion of prostitution were included in the charges.

"I'm here today to announce charges stemming from the 45th statewide investigative grand jury against the District Attorney of Bradford county, Chad Salsman, for routinely assaulting women that he represented as a private attorney, and his efforts to obstruct the investigation during his time as this county's District Attorney," AG Shapiro said.

Salsman "would regularly use his position and power as an attorney to coerce his victims into performing sexual acts on him" pic.twitter.com/w1fnmJN1iz

According to the prosecution, Salsman, who was elected DA in November 2019, coerced many women into unwanted sexual acts. He then led them into his office's private bathroom to "clean up" after forcing them into inappropriate sex acts, according to a criminal complaint. Reportedly, after he was done with the women, he threatened them to keep quiet about the incidents.

A grand jury heard women complain that Salsman groped them, hunted for nude photographs, and coerced or compelled them into sexual acts, sometimes even on his work desk.

"Many of Salsman's clients struggled with addictions, had a history of being sexually abused, or suffered from other vulnerabilities which Salsman exploited," the jurors wrote in a complaint issued Friday. "He used his knowledge of their vulnerabilities to overcome their lack of consent and sexually assault them."

Authorities accuse Salsman of avoiding charging a client in a custody case after she started having sex with him. The other woman told Salsman that she had been raped, and in a subsequent visit, he ordered her to enter his office through a back door and undress.

"He picked these victims because they didn't have another choice," Shapiro continued in his statement. "Because he thought they would be easy to silence. And likely they would be less believed if they ever came forward."

According to the report, when being arrested Salsman only said he was innocent, while his lawyer, Sam Stretton, reportedly claimed that the prosecution lacked evidence of forced sex.

"And my investigation seems to support that proposition," Stretton said. "So we will vigorously try this case. This will not be a plea. There was never any grabbing, improper touching. There was never anything of that nature. Never any intimidation."

The court reportedly set bail for Salsman's release at $500,000, and according to the lawyer, the DA will be released later in the day after posting 10% of it.  The status of Salsman as district attorney has not changed, and his political fate will be up to Bradford County voters and the board that investigates claims of misconduct against prosecutors.

As Attorney General, I have a responsibility to stand up for people who need a voice in our Commonwealth. Chad Salsman is not fit to serve, and he will be held accountable.

There were other women who reported similar assaults, the grand jury said, but those events happened too long ago to issue criminal charges. In late 2019, the case for Salsman was appealed to the attorney general's office by a former district attorney from Bradford County, the grand jury noted.

Salsman has served as the District Attorney for Bradford County since January 2020. State records indicate that he has been a Pennsylvania lawyer since 2001.