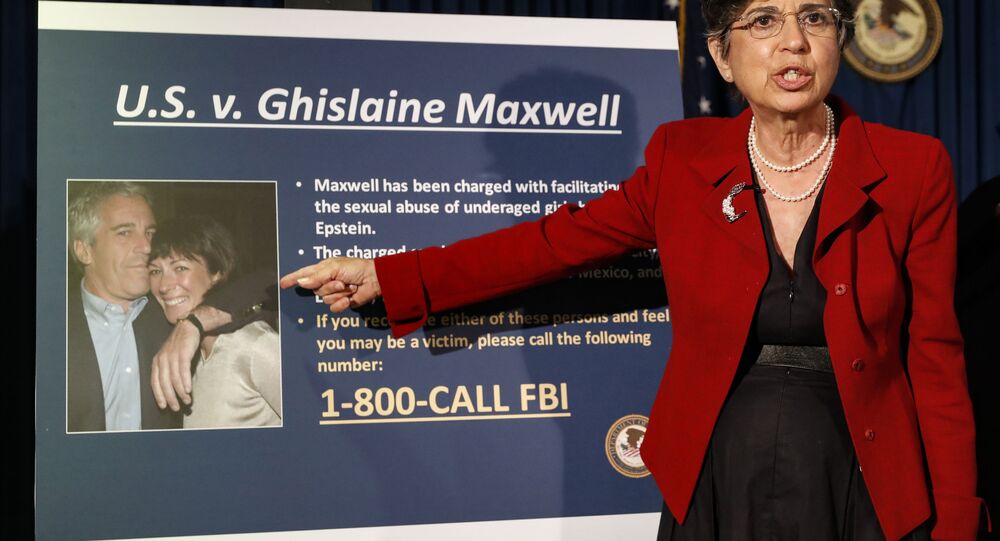 In July 2019, Epstein was arrested on sex trafficking charges and put in a New York City jail to await trial. Just a month later, he was found dead in his prison cell, with the authorities concluding that the 66-year-old had committed suicide.

In the early 2000s, then-senior US Department of Justice (DOJ) officials certified a non-prosecution agreement on Jeffrey Epstein to spare him of federal sex-trafficking charges at the time, according to court documents disclosed on Thursday. The White House and the DOJ have yet to comment on the matter.

The documents were made public by attorneys for Ghislaine Maxwell, Epstein's former associate, who was arrested by the FBI in July 2020, on charges of playing a role in the "sexual exploitation and abuse of multiple minor girls" by the convicted paedophile who was found dead in his New York jail cell in August 2019.

The court filing contains a copy of the deal that was inked by then-Florida federal prosecutor Alexander Acosta. The document details how the "atypical" agreement which kept Epstein from facing federal prosecution was agreed upon.

Maxwell's lawyers argued that the deal was "heavily negotiated over approximately eight months" and was approved by "senior levels of Main Justice in Washington, DC".

In a separate development, the Epstein Victims' Compensation Programme (VCP) announced that it will stop offering payouts to the late convicted paedophile's accusers through at least 25 March.

The fund cited uncertainty about the liquidity of the Epstein estate assets needed to finance payouts.

© AP Photo / Jeenah Moon
Attorney Gloria Allred, holds a picture of Jeffrey Epstein and her client Teala Davis during a news conference, Thursday, Nov. 21, 2019, in New York, about the filing of a lawsuit against the estate of Epstein. Davies says she was 17 when she was victimized by Epstein

VCP administrator Jordana Feldman said in a statement that she regrets a pause in payouts as she underscored the necessity of protecting the rights of Epstein accusers whose claims have yet to be resolved.

"Issuing a compensation offer that cannot be timely and fully funded and paid, consistent with the way the [Epstein Victims' Compensation] Programme has operated to date, would compromise claimants' interests and the guiding principles of the programme", Feldman said in a statement.

In May 2020, the disgraced finacier's accusers along with Epstein's estate and US Virgin Islands Attorney General Denise Attorney reached a deal to compensate more than 100 victims who claim to have been subjected to the financier's dirty sexual practices.

Media reports claimed that about $49.8 million had already been transferred to an unspecified number of women through the VCP "from June to 31 December 2020 onwards".

In 2008, Epstein pleaded guilty to procuring a person under 18 for prostitution and felony solicitation of prostitution. He was then released under a plea deal, only to be charged with sex trafficking in July 2019.

© AP Photo / New York State Sex Offender Registry
Jeffrey Epstein Reportedly Bragged About Taking Virginity of a Teenager, Court Documents Reveal
In August of that year, the 66-year-old was found dead in his prison cell in New York City, with officials declaring that he had committed suicide.

The cause of his death, however, remains disputed amid conspiracy theories wondering whether he was murdered to prevent him from testifying against his high-profile friends, including Donald Trump, Bill Clinton, and Prince Andrew.