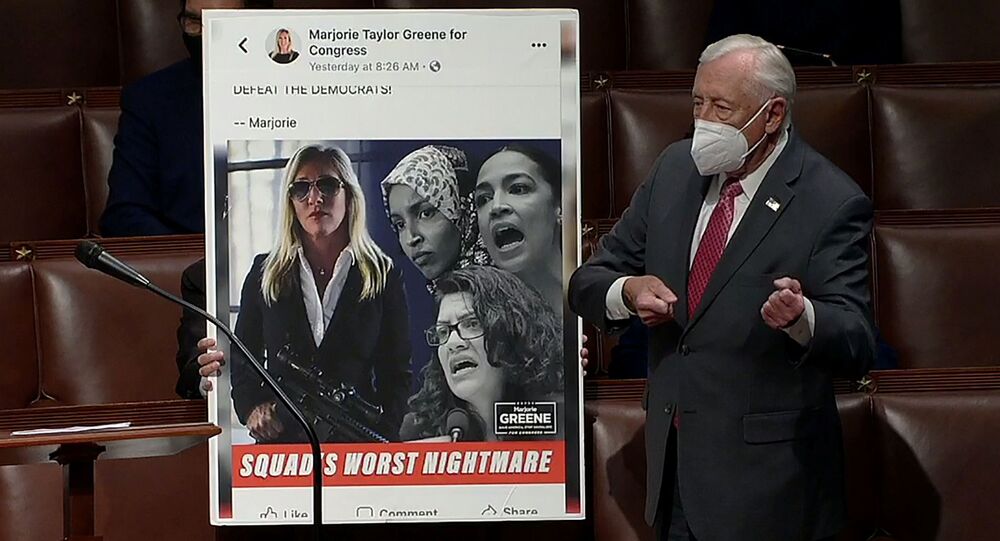 Introduced by Rep. Debbie Wasserman Schultz (D-FL), the House resolution sought to specifically remove Rep. Marjorie Taylor Greene (R-GA) from the House Education and Labor Committee and the Budget Committee "in light of conduct she has exhibited."

The US House of Representatives voted Thursday to remove the freshman congresswoman from committee assignments after she came under fire for incendiary remarks calling for violence against Democrats.

The vote came down with 230 in favor and 199 against. A total of 11 Republicans crossed the aisle and voted with their Democrat counterparts.

The development came after the US House voted along party lines to overturn Republican efforts to adjourn the Thursday session and prevent the chamber from debating and voting on a resolution calling for the removal of the controversial official.

Amid an earlier debate on the resolution, Wasserman Schultz called Greene's earlier statements on the House floor a "mild walkback." She noted that Greene's recognition of her ill behavior is "not enough to prevent her future harm."

"Now that she's made her choices, the House must limit the future harm and violence that she can inflict on this body," Wasserman Schultz said.

In recent weeks, Greene fell under the microscope for her history of spreading conspiracy theories and endorsing political violence against Democrats prior to taking office.

In addition to embracing unsubstantiated claims that the 2020 election was "stolen" from former US President Donald Trump, Greene also alleged that the California wildfires were deliberately started by a space laser and questioned whether a plane had in fact struck the Pentagon during the 2001 terrorist attacks, among other claims.

She also claimed that school shootings have been staged and even went as far as taunting a survivor of the deadly Marjory Stoneman Douglas High School shooting in Parkland, Florida.

"I was allowed to believe things that weren’t true, and I would ask questions about them and talk about them. And that is absolutely what I regret,” Greene added in an attempt to disavow her beliefs in various QAnon conspiracy theories.

Wearing a mask with the words "Free Speech" adorned on the front, Greene also took the time to accuse the media of distorting her record and for taking her words out of context. While Greene acknowledged her mistakes, she did not apologize for her comments.

The House's efforts came one day after House Minority Leader Kevin McCarthy (R- CA) condemned Greene's past commentary, but opted not to reprimand her. McCarthy told reporters after a meeting with House Republicans that Greene had "said she was wrong."

SNL is 'Scared' to Joke About Biden Over Fear of Being 'Cancelled', Adam Carolla Says