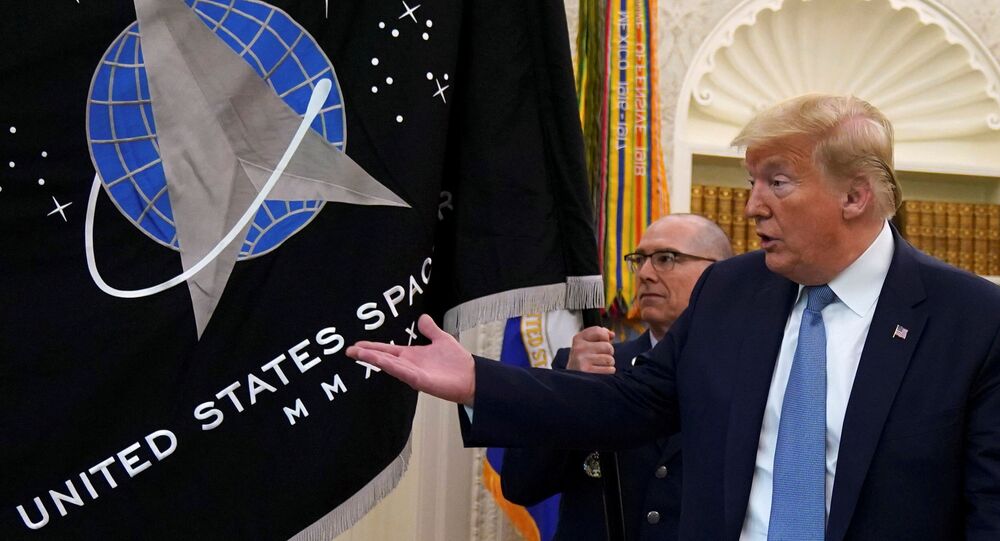 The Unites States Space Force (USSF) may sound like a solution in search of a problem, and has come in for much lampoonery. But it manages several small yet important operations hived off from the US Air Force and the Strategic Command.

US President Joe Biden's mouthpiece put her foot in it when she mocked the US Space Force, but is it more than just a Star Wars science fiction boondoggle?

White House spokeswoman Jen Psaki surprised few pundits on Tuesday when she was unable to answer a journalist's question on whether the new administration would keep the separate military arm founded under Biden's predecessor Donald Trump.

"Wow, Space Force. It’s the plane of today", Psaki sarcastically jibed, before admitting she would have "check with our Space Force point of contact," lamely adding: "I’m not sure who that is."

Psaki finally came back with the answer on Wednesday, saying USSF personnel "absolutely have the full support of the Biden administration" which had no plans to abolished it — and anyway, that would be up to Congress.

But the USSF's commander Chief of Space Operations General Jay Raymond was also kind of vague on what his command actually does when trying to explain it to a journalist on Wednesday.

"Space doesn’t have a mother. You can’t reach out and hug a satellite, you can’t see it, you can’t touch it. It’s hard to have that connection if it’s 22,300 miles above your head,” Raymond said. "But there is a very, very, very strong connection between those capabilities and our way of life."

Raymond admitted he had trouble explaining what he does to his own mother recently after she saw a TV report on the force. "I’m like, ‘Mom, that’s kind of what I do!' It’s just hard to understand," he said.

Trump's announcement of an independent force for space-based warfare — nominally separate the US Air Force — drew ridicule from his usual critics. Certainly its insignia looks like a cross between the Starfleet badge from Star Trek and that emblazoned on the chests of classic Lego astronauts.

But in fact the USSF had been in the pipeline with bipartisan support for years before it was separated in 2019 from the US Strategic Command (STRATCOM), the multi-service force in charge of fighting a nuclear war.

The USSF annual funding is $15.5 billion — a fortune to some, but a trifling 0.02 per cent of the total US defence budget. It has 16,000 personnel, respectable for a private corporation but only about a third of the US Coast Guard's strength, and less than a tenth of the 180,000 US Marine Corps.

The space force has clear origins within the USAF, which still runs about three-quarters of its support services. A total of 23 USAF units were hived off into the new service when it was created. The USSF's two major bases are at Vandenberg Air Force Base in California and Patrick Space Force Base in Florida — part of the famous Cape Canaveral space launch complex, from where it runs "spacelift operations".

We do not want war in space,” says spokesman Colonel Matt Anderson. “We are trying to deter any conflict in space. However, if deterrence fails the United States needs to be in position to defend the American way of life, which depends on space every day.”

It's most exciting role is in early warning of attacks, using both ground stations and satellites to detect incoming missiles. USSF second-in-command General David Thompson claimed the force gave vital prior warning of the Iranian ballistic missile attack on US forces at the Ayn al-Asad Air Base in Iraq in January 20230. But then-Iraqi prime minister Adil Abdul-Mahdi said at the time that Tehran warned Baghdad hours in advance of the strike.

The space force also manages the US constellation of some 35 GPS navigation satellites — so now you know who to blame when your car sat-nav sends you down the wrong road.

GPS was developed by the Pentagon to guide both vehicles and weapons like the Joint Direct Attack Munition GPS-guided glide bomb, but the signal can be jammed locally with inexpensive electronics. The satellites are also vulnerable to interception missiles launched from the ground or high-flying fighter planes like the Mikoyan MiG-31.

“It’s no secret that Russia and China have made extreme gains in the last couple decades and they have actually shown the ability to threaten some of our assets in space,” says Anderson. Ostensibly to deter such efforts, the USSF has a series of ground-based stations to jam signals from other nation's satellites.

Finally, the USSF uses its powerful ground-based radar installations to track the roughly 26,000 pieces of orbital "space junk" that present a hazard to satellites, manned spacecraft and the International Space Station (ISS).