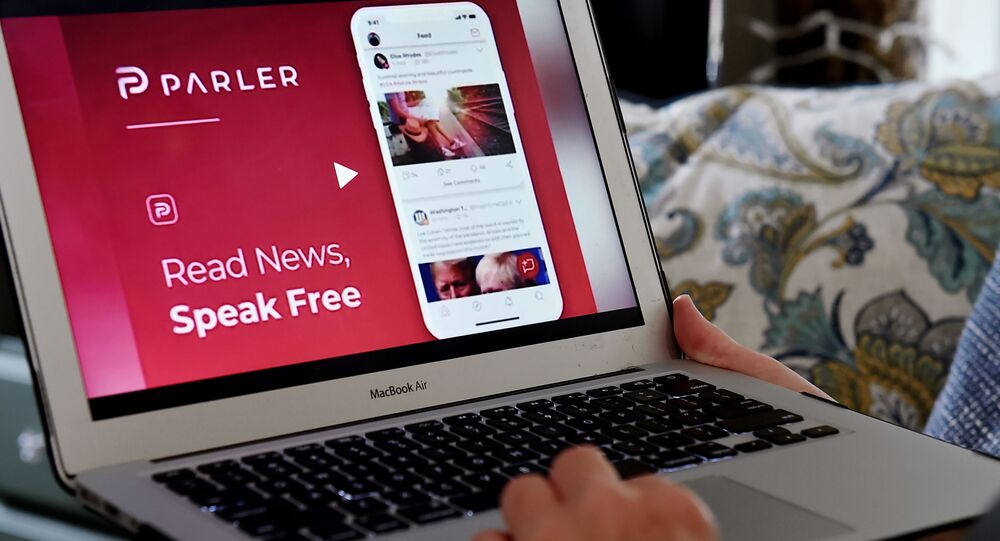 Last month, the social media platform, which maintained a strong commitment to free speech, was cut off by Amazon Web Services. The latter claimed that Parler had failed to moderate "violent content" posted by its users.

"On January 29, 2021, the Parler board controlled by Rebekah Mercer decided to immediately terminate my position as CEO of Parler. I did not participate in this decision. I understand that those who now control the company have made some communications to employees and other third parties that have unfortunately created confusion and prompted me to make this public statement", Matze said.

He said that over the past few months he has faced "constant resistance" to his original vision of the platform and to his belief in free speech amid Amazon cracking down on the company.

© AP Photo / Christophe Gateau
The website of the social media platform Parler is displayed in Berlin, Jan. 10, 2021. The platform's logo is on a screen in the background. The conservative-friendly social network Parler was booted off the internet Monday, Jan. 11, over ties to last week's siege on the U.S. Capitol, but not before hackers made off with an archive of its posts, including any that might have helped organize or document the riot.

"I want to thank the Parler employees, the people on Parler, and Parler supporters for their tireless work and devotion to the company. They are an amazing group of diverse, hardworking, and talented individuals and I have the utmost respect for them. Many of them have become my second family", Matze added.

The platform started growing in popularity after the ban of now ex-US President Donald Trump on Twitter, as multiple users left the network for Parler.

Parler has been down since the Amazon Web Services demarche. According to reports by Insider, at least six major providers have refused to host the platform since then. After the Amazon move, Apple and Google deleted Parler from their app stores, claiming that the microblogging platform was failing to moderate "violent content" amid clashes on Capitol Hill on 6 January.

On 10 January, Amazon announced the suspension of Parler from its web hosting services, citing a "very real risk to public safety", after the media claimed that the protesters at the Capitol had used Parler to coordinate their actions.

Parler's relaunch, originally set for the beginning of February, was delayed. Now it is displayed as only a static page, informing users about the current state of the platform.