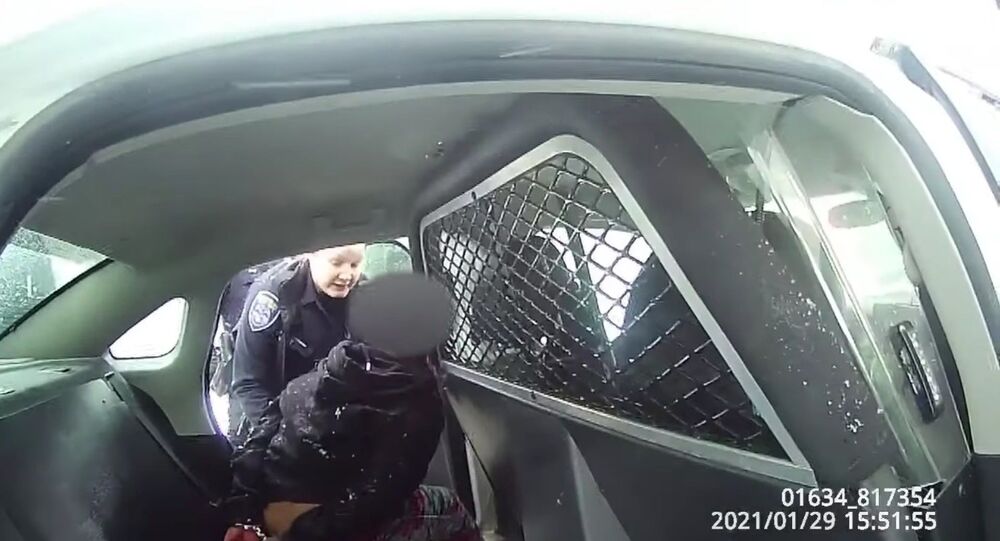 Video showing Rochester Police Department (RPD) officers violently restraining a minor has led the department to come under renewed scrutiny, as it was also at the center of the 2020 death of Daniel Prude, who stopped breathing after officers placed a mesh hood over his head and pressed his face into the pavement.

An investigation into police in Rochester, New York, was recently launched after footage surfaced showing the aggressive takedown of a nine-year-old girl by RPD officers who were initially responding to a report of “family trouble” in the area.

The announcement came on Sunday when authorities held a pair of news conferences that offered insight into the incident as the police department released body-worn camera footage of the officers’ interaction with the unidentified minor.

Video footage of the initial Friday interaction between police and the minor shows an officer chasing her down a street; however, within moments, the officer apprehends the individual and begins asking the youth why she ran away from her mother. The nine-year-old later explains that she believed her mother stabbed her father, a statement which promptly causes her mother to begin lashing out.

The recording eventually shows the officer repeatedly urging the mother to return home when she appears to argue with individuals inside a nearby vehicle. Although the parent does comply, the situation quickly escalates between the officers and the minor once additional cops arrive on the scene.

Warning: Videos may be disturbing to some viewers.

Seconds after directing a responding officer to place the young girl inside a patrol car, the minor refuses and begins to repeatedly call out for her father. At one point in the recording, the youth falls to the ground and officers are seen placing her facedown on the snow in order to place her in handcuffs. At the time, temperatures were far below freezing.

“I want my dad, I want my dad,” she continues to yell out as officers place her in restraints. Although the video feed briefly cuts off in the first recording issued by the department, it later resumes with the minor sitting in the patrol car, but refusing to fully enter the vehicle.

The first video cuts off after an officer calls for the responding cop to detain the child’s mother as a female officer is overheard urging the minor to comply with orders to sit inside the squad car. A total of six patrol cars are seen in the area.

The second video released by the agency offers more insight and documents the female officer, who was initially seen trying to work with the minor, suddenly losing her patience and threatening to pepper-spray the child if she continues to not work with the officers.

“I’m going to pepper-spray you, but I don't want to, so sit back,” the officer is heard saying. “Sit back, come on. This is your last chance otherwise pepper spray is going into your eyeballs.”

At one point, an officer remarks the girl is “acting like a child,” to which she responds, “I am a child.”

With the minor continuing to call out for her father, another officer eventually tells the female officer to “just spray her at this point.” Video shows the female cop shaking the bottle of pepper spray and deploying the irritant, prompting the youth to cry out for someone to wipe her eyes as both doors to the patrol car are then shut.

The second video cuts off as an officer calls the situation “unbelievable.”

It’s presently unclear under what grounds the mother was arrested and if the child’s father was in touch with the officers. Following the altercation, the child was transported to the Rochester General Hospital and released from police custody.

According to NBC News, in addition to the RPD investigation, Rochester’s police accountability board is initiating its own probe into the events that unfolded. None of the officers who responded to the scene have been identified, and it’s uncertain whether they are still on active duty amid the investigation.

Mike Mazzo, president of the Rochester Police Locust Club - the union representing the department, commented on the detainment and told the Rochester Democrat and Chronicle that it was “not a simple situation.”

“I’m not saying there are not better ways to do things,” he said, adding, “It's not TV, it's not Hollywood. We don't have a simple [situation], where we can put out our hands and have somebody be instantly handcuffed and comply.”

Mazzo has noted that no department policies were violated during the police interaction.

Rochester Mayor Lovely Warren told reporters at a conference that although the minor’s mother had later indicated her daughter was suicidal and was attempting to run away from her home, a response from the division’s Person in Crisis (PIC) team was not necessary since the 911 call was labeled “family trouble” and involved a possible stolen vehicle.

The PIC initiative was only announced days before the Friday altercation. The program intends to provide a non-police response to emergency situations that involve individuals experiencing emotional or behavioral difficulties.

The incident highlighted the longstanding problem within many police departments across the US that lack effective, non-violent de-escalation tactics. In many instances, officers have been poorly equipped to handle such incidents or those involving an individual with a mental illness.