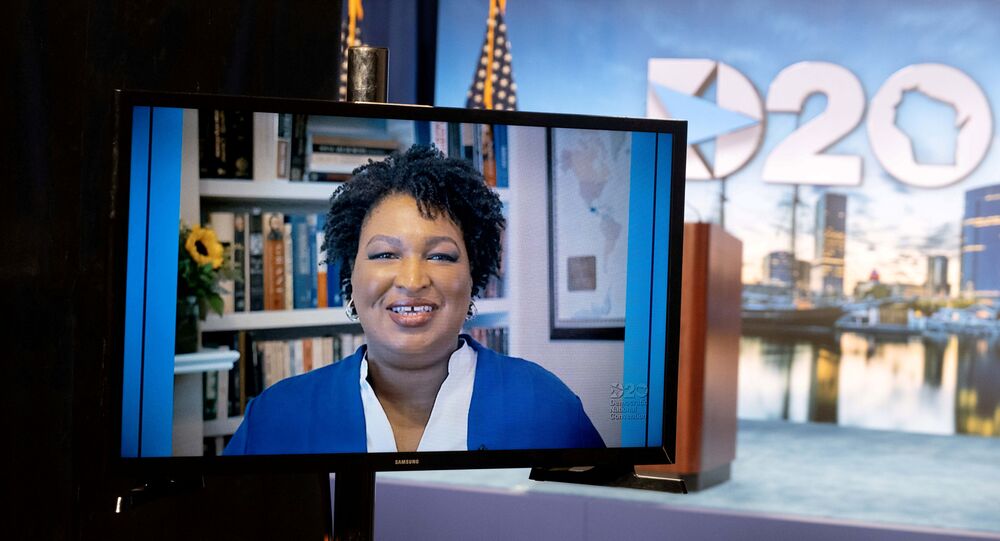 Democratic leadership and mainstream US media have repeatedly proclaimed the 2020 election efforts of Stacey Abrams, founder of voting rights organization "Fair Fight Action" and former Minority Leader of the Georgia House of Representatives, played a crucial role in US President Joe Biden's victory and Democrats' flipping of the US Senate.

“Abrams’ work follows in Dr. Martin Luther King Jr.’s footsteps in the fight for equality before the law and for civil rights,” Haltbrekken said, as reported by Reuters. “Abrams’ efforts to complete King’s work are crucial if the United States of America shall succeed in its effort to create fraternity between all its peoples and a peaceful and just society."

While the 47-year-old is no stranger to politics, Abrams' recent efforts against voter suppression and voter registration initiatives have catapulted her into a new political bracket.

While Abrams served on the Georgia House of Representatives from 2007 to 2017, she did not gain national notoriety as a Democratic heavyweight until her 2018 gubernatorial campaign against GOP nominee and then-Georgia Secretary of State Brian Kemp.

Abrams notably made history as the first Black woman to secure a major party nomination for a US gubernatorial race. However, the Democratic nominee was only able to secure 1,923,685 votes, while Republican nominee Kemp received 1,978,408 votes.

Neither candidate received a majority of the votes and the election made history as the closest gubernatorial race since 1966. While Abrams, who failed to meet the runoff threshold, did suspend her campaign following election certification, she adamantly refused to concede. According to Abrams, Kemp, as sitting secretary of state, oversaw the state's voter rolls and stalled some 50,000 votes over voter registration issues.

Kemp maintained that all eligible votes were counted. He also claimed that Abrams wanted to subvert the "rule of law by letting illegal immigrants vote."

After sounding the alarm on so-called voter suppression, the former Georgia House Democratic leader used her newfound exposure as backing for the 2018 creation of Fair Fight Action, a group and political action committee dedicated to fighting voter suppression.

Shortly after its founding, the group found itself on the receiving end of a complaint filed with the Internal Revenue Service by the Foundation for Accountability and Civic Trust (FACT), a GOP-affiliated organization.

The complaint argued that Abrams was violating political 501(c)(4) nonprofit guidelines by using her organization to help her own political ambitions. FACT argued "the organization has blatantly demonstrated through its leadership, purpose and activities that its primary mission is to advance Abrams' political career."

The GOP-affiliated organization's comments followed a speech in which Abrams proclaimed she would be using the nonprofit as a vehicle to "channel" her work and promote her political agenda.

“It’s no surprise that right-wing hit groups allied with Donald Trump are launching bogus attacks against Fair Fight,” Fair Fight Action CEO Lauren Groh-Wargo told Fox News in an emailed statement. “They’re afraid of Stacey Abrams and even more afraid that all eligible Georgians will exercise their right to vote.”

A spokesperson for Abrams has also proclaimed the former Georgia House Democratic leader will step down from Fair Fight Action.

The group's political action committee revealed last month that some 550,000 donors contributed between the months of October 26 and December 31 alone. Furthermore, documents filed with the Federal Election Commission in January noted the group and its hundreds of thousands of donors raised some $95 million.

Biden was handed the Electoral College victory after weeks of legal challenges related to allegations of widespread voter fraud. At least 2,473,633 votes were recorded for Biden, while Trump received a close 2,461,854 votes in the presidential race.

“Let’s hear it for Stacey Abrams. Nobody, nobody in America has done more for the right to vote than Stacey,” Biden gushed in Atlanta, Georgia, on the eve of the Senate runoff vote. “Stacey, you are changing Georgia. You have changed America.”

According to Abrams, with most Americans were focused on the presidential election results, voter registration and community engagement were even more crucial efforts for the Senate runoff races between then-Sens. David Perdue (R-GA) and Kelly Loeffler (R-GA) and Democrat challengers Jon Ossoff and Rev. Raphael Warnock, respectively.

"Joe Biden's been a part of American politics for 40-plus years. And so for a number of new voters they're going to vote only when they're confident," Abrams told ABC's Martha Raddatz ahead of the runoffs. "That's why we spent this time over the last nine weeks educating voters about Jon Ossoff and Raphael Warnock."

Some 76,000 new voters registered to vote between the November general election and the deadline to register for the Georgia Senate runoffs, according to the Atlanta Journal-Constitution.

Both Ossoff and Warnock beat their Republican opponents, bringing the Senate to a 50-50 Republican-Democrat split. The presence of Vice President Kamala Harris, a Democrat who serves as president of the Senate, has translated to a Democratic majority in the legislative chamber.

“She has just an enormous amount of talent, and the ability to focus that talent in a very intense way,” Dean proclaimed. “And so when you get somebody like that, of course you want them elevated as much as possible.”

Abrams believes that voter registration initiatives by Fair Fight Action and like organizations were responsible for the Democratic wins in the runoffs, as well as Biden's winning of the state's electoral college votes.

"And we know absolutely in Georgia that there was a sea change because we were able to push back against some of the most egregious voter suppression in the nation," Abrams told PBS News Hour host Judy Woodruff following the Senate runoff results. "And the result was that we were able to deliver 16 Electoral College votes for a Democratic nominee for the first time in 28 years, and, a few weeks later, we were able to flip two U.S. Senate seats."

Trump and his former senior adviser Jared Kushner, who is also 45's son-in-law, were also nominated for a Nobel Peace Prize.

"Donald Trump is the first president of the United States in the last 30 years, whose office the country has not started any war," asserted Estonian MEP Jaak Madison via Facebook, recounting his nomination of the former US president.

"In addition, several peace agreements have been made under his leadership in the Middle East, which has helped ensure stability in the region and peace."

Famed American attorney Alan Dershowitz, a member of the defense team for Trump's 2020 and 2021 Senate impeachment hearings, nominated Kushner and his adviser, Avi Berkowitz, for the international honor, citing their respective roles in negotiating the historic "Abraham Accords," which encompasses four deals between Israel and the Arab nations.