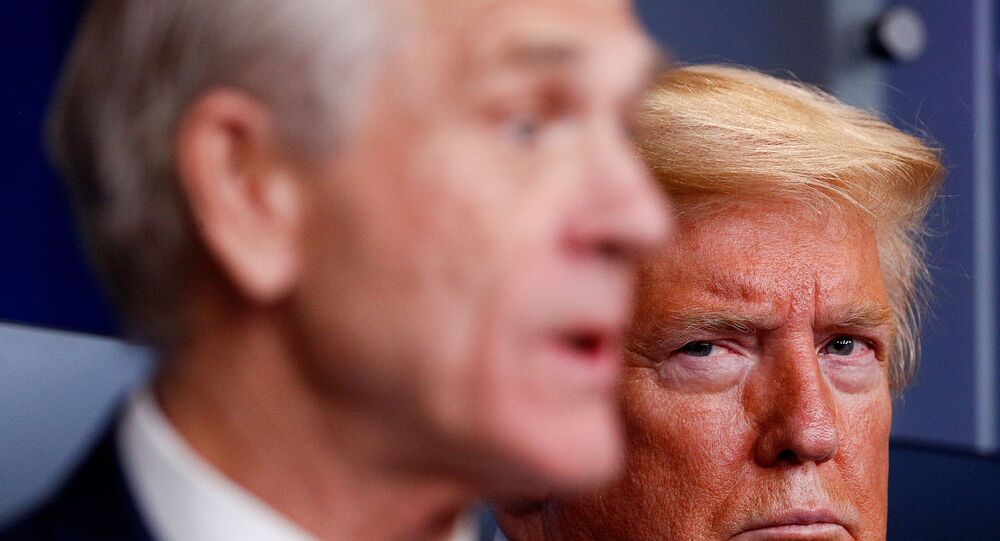 The former White House aide claimed in a recent interview that numerous executive orders from the Biden administration would see more Chinese goods in the US in a reported reversal of former US president Donald Trump's trade war with Beijing.

Former White House trade advisor Peter Navarro accused US president Joe Biden of "dismantling all of the [Trump administration's] Buy American [executive] orders... on behalf of the communist Chinese" in a recent interview.

© REUTERS / KEVIN LAMARQUE
Biden Team to Postpone Trump-Era Ban on Chinese Firms Allegedly Linked to Military, Communist Party
Speaking to Fox News host Jeanine Pirro, the former Trump administration aide said that executive orders from Biden were linked to the "infrastructure for our bulk power system" and another to "extending financing to the states".

But a third order would allegedly force US taxpayers to buy "more Chinese stuff," he claimed.

But Trump would roll back the executive orders after he would be "elected in a landslide in 2024", he added.

"Here's the thing with these executive orders. It's politics as usual. When Donald Trump gets elected in a landslide in 2024 he's going to roll out the same kind of executive orders to roll things back," Navarro claimed.

The comments come after Trump said in his leaving speech on 20 January his administration would "be back in some form".

But US lawmakers launched a second impeachment proceeding against the former US president a week earlier, which could bar him from holding office in the future for his reported role in inciting the Capitol Hill riots in early January, killing five people.

© REUTERS / Damir Sagolj
The Task: China Must Rally 'Whole Country' to Defeat US 'Technology Blockade', Top CCP Official Says
Biden's team confirmed last week it would postpone until 27 May a Trump-era ban on US firms investing in Chinese tech companies allegedly linked to the Chinese Communist Party and military.

The delay would allow Biden to review the effects of Trump's contentious trade war with China, which began restricting and blacklisted numerous top mainland firms, including Huawei Technologies, ZTE, ByteDance, SMIC and Xiaomi, in May 2019.