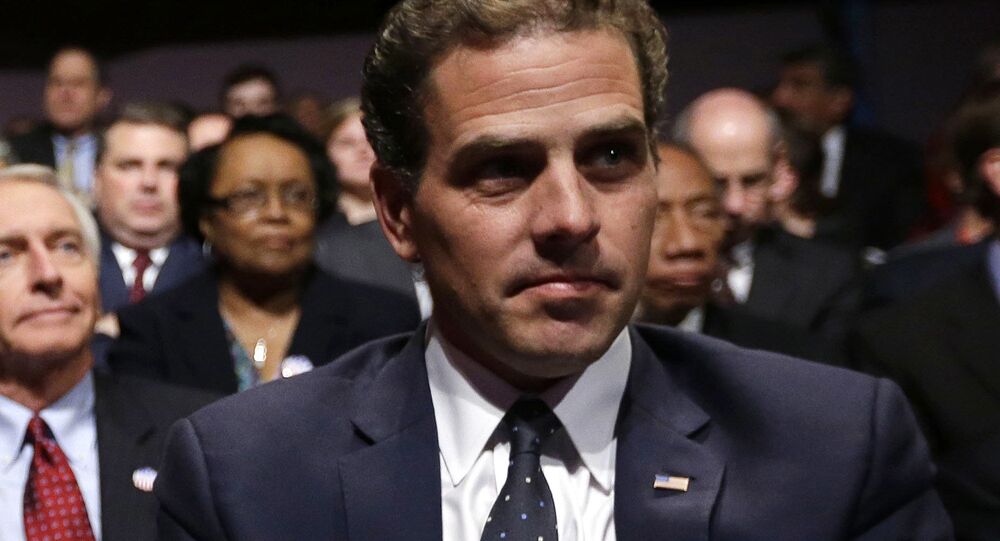 Last year Hunter Biden, in the crosshairs over allegedly questionable business dealings, particularly in China and Ukraine, besides being the target of a probe by the US Attorney's Office into his tax affairs, revealed he had taken up painting full-time.

Budding artist Hunter Biden, who is gearing up for a solo show, is reportedly to be represented by Soho art dealer Georges Berges, who was once arrested for “terrorist threats” and “assault with a deadly weapon” in California, writes the New York Post.

The son of US President Joe Biden, a recovering addict whose controversial business dealings with the Ukrainian energy company Burisma became the subject of a Department of Justice investigation, is also under federal investigation for what he calls "tax affairs" related to his various business machinations in China.

The 50-year old Biden, who earlier worked as a lobbyist, venture capitalist and an investor, revealed last year that art "kept him sane" during his protracted struggle with alcohol and drug addiction.

​He has since been keeping a low profile while shuttling between Washington DC and his new 2,000-square foot hilltop Los Angeles home, where he moved with his wife Melissa Cohen in January 2020.

Oh, now, I wouldn’t say Biden hasn’t accomplished anything in 50 yrs. Being able to afford multiple homes worth millions each on $180K a year is quite a feat! The last one is Hunter’s in Hollywood Hills. No word on who paid for it - China, Ukraine, taxpayers, who knows? pic.twitter.com/MvXT1GdiKI

Hunter Biden’s new art dealer, Georges Berges, 44, established his gallery in 2015, with locations in NYC’s SoHo and in Berlin, Germany.

“He’s got this Woody Allen look to him … He’s crazy in a good way,” an artist who worked with Berges was cited as telling The Post.

​The Berges Gallery is said to regularly feature artwork by Chinese artists, with the dealer cited by China Daily in 2014 as revealing he was hoping to open other art venues in Beijing and Shanghai in 2015.

“The questions that I always had was how’s China changing the world in terms of art and culture,” Berges had said at the time.

Georges Berges is no stranger to court wrangling. In a federal lawsuit dated 2016 he was accused of defrauding an investor - Ingrid Arneberg. The plaintiff claimed she invested $500,000 in Berges’ gallery for a promised ‘expansion’, however the cash ostensibly went towards paying off old debts. In a case that was settled in 2018, Berges subsequently counter-sued Arneberg.

Furthermore, in 1998 the art dealer was charged with assault with a deadly weapon and making “terrorist threats.” The latter charges were later dismissed, with Berges pleading “no contest” to the assault and receiving 36 months probation, without any more details of the case available.

There has been no comment on the report by Georges Berges or George Mesires, a lawyer for Hunter Biden.

From Laptops to ‘Psychedelic Florals’

As he forays into the world of art, Hunter Biden reportedly resorts to Japanese Yupo paper, multicoloured alcohol ink and a metal straw to blow forth "psychedelic florals and ethereal patterns that look like nature viewed through a microscope, leaning toward the surreal."

He's some kind of an "artist" in his $12,000 dollar a month rented SoCal Hollywood Hills home

​The new career twist comes against the backdrop of heightened interest throughout last year in the younger Biden’s questionable business dealings in China and Ukraine.

On 9 December 2020 Hunter Biden announced that the US Attorney's Office in Delaware was also investigating his ‘tax affairs’, with Fox News also citing a source as saying the investigation would cover alleged dealings with China.

During the 2020 presidential election campaign the Hunter Biden corruption scandal that blew up in October placed the younger Biden in the crosshairs.

The New York Post had published an article on alleged evidence discovered on a laptop, believed to have belonged to Joe Biden’s son.

What was claimed to be potentially incriminating information extracted from the laptop suggested that Hunter Biden had been trading arranged meetings with his father during the latter’s stint as vice-president under Barack Obama’s administration in exchange for cash. The trove of documents that surfaced also alleged revealing glimpses into Biden Jr’s drug addiction and sex life.

With mainstream media ignoring and underplaying the story for weeks, Democrat Joe Biden’s team had dismissed the reports at the time as “Russian disinformation”.