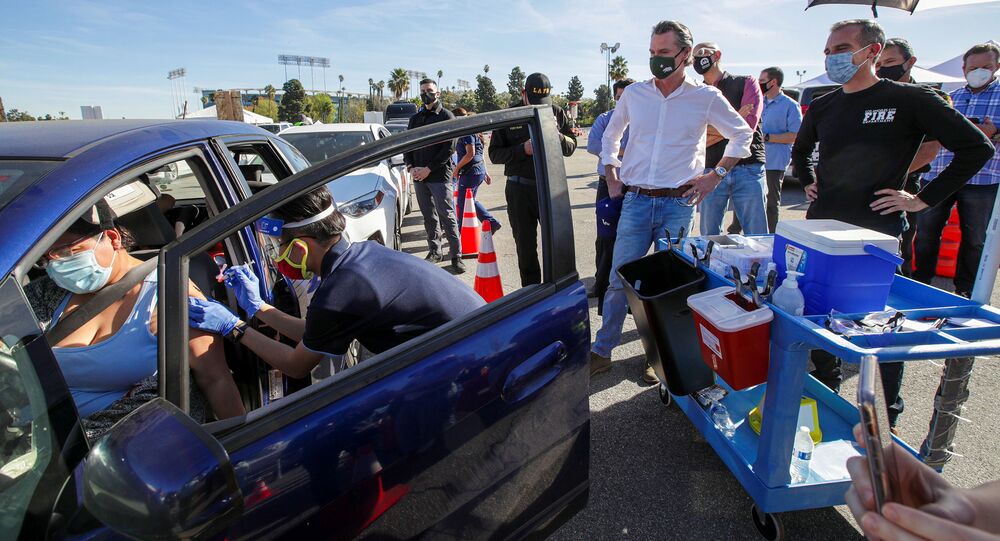 Dodger Stadium, situated in Los Angeles, California, is said to be one of the largest coronavirus vaccination sites in the United States - the nation that tops the list of countries that are most affected by the COVID-19 pandemic.

Anti-vaccination protesters disrupted the work of a large vaccination site at the city's Dodger Stadium on Saturday, prompting a brief closure of the gates and causing the lines for the vaccine to lengthen.

The Los Angeles Police Department confirmed that the protests remained peaceful and said that it had no connection to the closure of the gate, adding that "all scheduled vaccines will be delivered."

Andrea Garcia, a spokesperson for Mayor Eric Garcetti's office, told The Hill in a statement that protesters disrupted the work of the vaccination site for 55 minutes, after which Dodger Stadium resumed operations.

"We remain committed to vaccinating Angelenos as quickly and safely as possible", Garcia said, cited by the outlet.

Photographs and video showing groups of protesters holding up posters - from regular to hilarious, as one woman was spotted with a sign saying "I only like muzzles in the bedroom", which apparently referred to face covers, not vaccines - and stalling the line of those who had arrived to get vaccinated.

We’re at the mass vaccination site at Dodger Stadium to get my mom the vaccine. The anti–vax protestors have approached the entrance to the site. The LAPD have now closed the gate. We have been sitting here for about half an hour. Nobody is moving. pic.twitter.com/GrJPA5wrqx

They were gathered in large groups without masks. At the very least fine them. When I rolled down my window briefly one of them threw pamphlets into my car. Fine then for group gathering without masks. pic.twitter.com/FIVvgzwiZ1

At Dodger’s Stadium this afternoon, police temporarily stopped vaccinations in response to around 40 anti-vaccine protesters at the entrance. pic.twitter.com/gyt0jut3ys

​Some protesters handed out flyers to people waiting in cars.

The anti-vaxxers tried handing out flyers to people in line. pic.twitter.com/xCy02jZvps

Another woman tells a car of people in line, “Have fun being a byproduct of Bill Gates.” pic.twitter.com/y8HTUAbYfh

​Los Angeles City Council President, Nury Martinez, denounced the anti-vaccination protesters, citing the rapidly rising coronavirus death toll in the region and urged them to "get out of the way". Her anger was supported by many netizens who criticised the demonstrators for protesting a health treatment that is not compulsory.

"Unbelievable", she tweeted on Saturday. "If you don't want the vaccine fine, but there are millions of Angelenos that do. 16,000 of your neighbors have died, so get out of the way."

Unbelievable. If you don't want the vaccine fine, but there are millions of Angelenos that do. 16,000 of your neighbors have died, so get out of the way. https://t.co/OTKL7ugJzL

California has more than 3.2 million confirmed coronavirus cases, with more than 1.1 million cases registered in Los Angeles County alone, according to Johns Hopkins University data. Over 40,600 people have died in the state due to coronavirus-related issues.