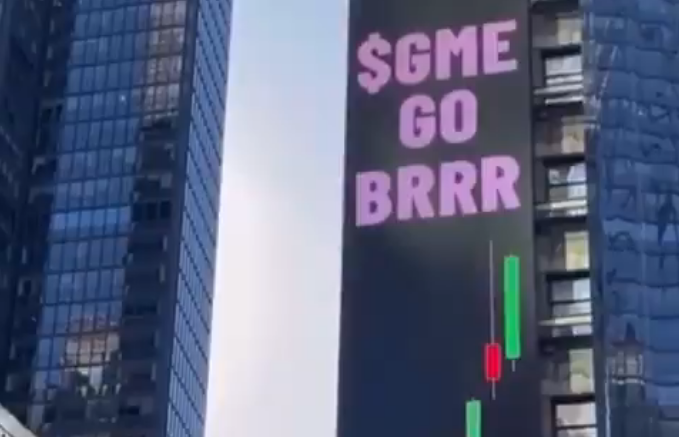 Due to the immense influence of social media and easy access to the stock market, amateur investors have turned Wall Street upside down. Independent investors conversing in Reddit agreed to buy up GameStop stocks, raising the retailer's shares to unprecedented levels and causing institutional investors to lose billions of dollars.

Rebellious investors that played Wall Street's institutional short-sellers, have reportedly rented billboard in Times Square to state that they will stand their ground and not withdraw their investments in GameStop.

A mocking “$GME GO BRRR” appeared on the corner of 54th and Broadway in Manhattan on Friday for an hour. The image was created by digital billboard maker Matei Psatta.

The picture refers to a popular internet meme that uses “Brrr” to parody the sound that money-printing machines make. GME is GameStop’s stock label on the New York Stock Exchange.

This is a real billboard in Times Square lmao pic.twitter.com/M4fy6JYtyF

A group of Reddit users communicating opinions in a subreddit called WallStreetBets, purchased GameStop stock earlier this week, purportedly as revenge toward professional Wall Street aces that have been short-selling and earning money from companies’ decreasing shares’ prices.

As GameStop’s stock, as well that of other companies, started to grow, long-sellers reportedly bought GameStop's shares, causing the company's stock - formerly dropping - to skyrocket, hurting institutional short-sellers and causing outrage among Wall Street barons and their employees.

GameStop shares, which in early January were worth just over $17 each, accordong to data platform Statista, soared to $347 by 27 January, stopping at the close of trading this week to $325. As the eye-opening stock play reached Washington, many political figures, including US Democratic representative Alexandria Ocasio-Cortez and Senator Ted Cruz threw in their support for small investors.

In a recent tweet, OAC noted that the complaining professional investors are being treated in the same way that they typically treat the US market.

Several Democratic lawmakers have called for an investigation into user restrictions that trading app Robinhood put on buying shares of some companies, including GameStop.

GameStop is a traditional brick and mortar retailer that sells consoles, games and movie discs, as well as other goods. In recent years, due to competition with online trading, the firm's sales have been falling.