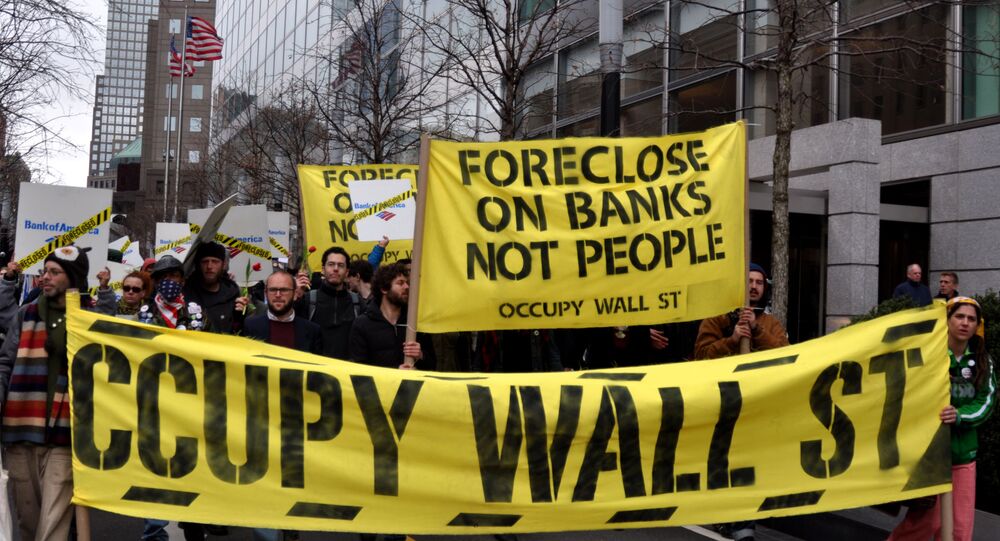 "Occupy Wall Street" was a 2011 movement calling for the "peaceful occupation" of Wall Street to protest economic inequality, with participants particularly focusing on the responsibility of the financial services sector for the problems. The initiative saw a global 'Occupy' movement work to address social and economic injustice in the world.

A New York state organization calling itself the Young Republicans is planning a protest against the Wall Street stock exchange on Sunday, a so-called Re-Occupy Wall Street, expressing their opposition against the actions of institutional hedge fund investors that suffered multi-billion losses after Wednesday's GameStop fall.

The organisation's leader, Gavin Wax, told New York Post in an interview that the events of the last few days were "absolutely despicable", apparently referring to investing app Robinhood blocking its users from buying shares in particular companies.

"We have the elites and the substrata of everyone else who doesn’t get to sit at the big-boy table and make the big-boy money", Wax said. "I do think they need to be prosecuted. A lot of these guys need to go to jail. Text messages and emails need to be seized. It was coordinated. There needs to be repercussions", he went on, in an apparent reference to the institutional effort to block amateur 'retail' investors.

The protest was announced on 28 January - a day after stocks in game retailer company GameStop, along with several other stocks, were purchased en masse by a group of amateur investors who gleaned information and coordinated their actions through the use of social media chat website Reddit.

On Wednesday, independent investors who were said to be using sub-Reddits to share opinions, appeared to cause hedge funds and professional financiers to lose billions of dollars, by carrying out a 'short squeeze' of stocks from GameStop and other firms, purchasing its shares to cause the stock price to rise higher and higher so that their own value increased even as the 'shorts' taken by institutional investors caused their value to plummet.

.@NYYRC will be staging a protest in Zuccotti Park to re-occupy Wall Street.

We are sick & tired of bailing out the fat cats and hedge funds for their own mistakes while they stomp on the little guy for trying to make a buck.

This is not capitalism. https://t.co/C9lxW5g4Wf

The name of the reported protest by the Young Republicans makes reference to the Occupy Wall Street movement that took place in 2011, also in Zucotti Park in New York City's Wall Street district, to stand against social and economic inequality. The protesters in particular blame the financial and investment sector for deep social injustice and united under the slogan "We are the 99%", in opposition to the wealthy 1% that control a majority share of the world's cash flow and resources.

At the time, Zucotti Park was turned into a large camp, with people sleeping in tents and sleeping bags, even as the encampment descended into disorder and a lack of hygiene as some in the finance workplace lamented that protesters had started "defecating on our doorsteps".

Wax, however, promised that the newly-announced Republican protest will be "nice and orderly", while also noting that the participants "will be bathing", apparently referring to the 2011 park encampment.

Please shower before coming, pick up your trash, and use a restroom when you need to go and not the street.

We are still Republicans after all. https://t.co/ygVmTHrlWU

Interestingly, the 2011 movement did not involve many Republicans, as, according to the Baruch College School of Public Affairs research, the majority of participants identified themselves as independents (around 70%) and Democrats (around 27%).

The discontent comes after Robinhood, an app claiming to side with independent 'retail' investors, blocked clients from purchasing some of Thursday's hottest stocks. Many users noted that the investment app had sold some of their stocks without permission, and at lower than market prices.

© CC BY 2.0 / Aranami / One Dogecoin
Is Dogecoin Next? Robinhood Blocks Skyrocketing Cryptocurrency Championed by Online Traders

Robinhood faces not only a massive backlash following the move, but also class-action lawsuits that will seek to prosecute the comapny that developed and marketed the app for “purposefully, willfully, and knowingly removing the stock ‘GME’ [GameStop] from its trading platform in the midst of an unprecedented stock rise thereby depriving retail investors of the ability to invest in the open-market and manipulating the open-market.”

The widespread condemnation was voiced not only by average US citizens, but also by activists and political figures. Democratic Representatives Rashida Talib and Alexandria Ocasio-Cortez, alongside a partisan rival, GOP Senator Ted Cruiz, have called for Robinhood to appear before Congress to explain its actions.

As the GameStop saga unfolded and independent investors reported that stock trading apps like Robinhood were blocking purchases and selling off shares as they became highly volatile, many retail traders pointed out that the market manipulation by trading companies is highly illegal and have urged fellow investors to "not sell" their stocks and "hold the line".

Several investor apps, such as Public, have tried to pawn off reposnisibility for their actions, claiming that the decision to limit user access to buying stakes was not voluntary but dictated by investment clearing companies that process the requests and make the deals.