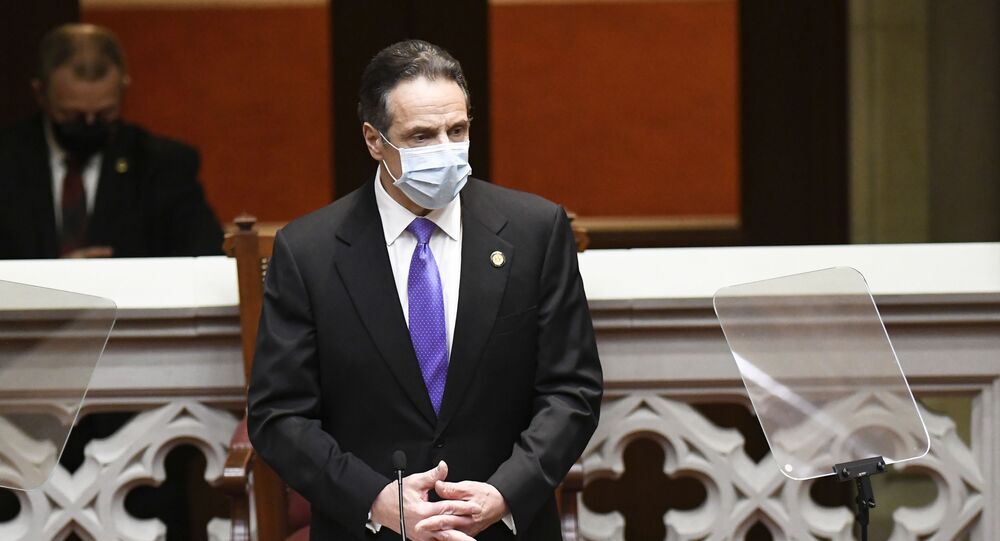 New York Democratic Governor Andrew Cuomo on Friday dismissed allegations in the NY Attorney General’s report alleging that his administration had ‘manipulated’ the tally of coronavirus-related deaths in local nursing homes, denouncing them as a "political attack" that began with former US President Donald Trump's administration.

A growing chorus of Republican voices has been demanding the resignation of governor of New York, Andrew Cuomo, after his response to the COVID-19 nursing home death toll scandal.

“Who cares [if they] died in the hospital, died in a nursing home? They died,” said the Democrat on 29 January, who earlier again blamed the Trump administration for the death toll, saying that "incompetent government kills people". The official was immediately rapped for coming across as 'disgusting', 'callous' and 'gutless'.

The families that lost their parents, grandparents, brothers, sisters. That's who cares. @NYGovCuomo should be thrown in jail for the rest of his life. @ChrisCuomo is pretty quite today. https://t.co/dwohQtdJ4a

My uncle died in a nursing home from COVID two weeks ago. I care @NYGovCuomo.

​On Friday, Cuomo was forced to fend off censure for his administration reportedly undercounting nursing home deaths by around 4,000, according to AP News.

The report showed that at least 12,743 long-term care residents died of the virus as of 19 January, as opposed to the official tally of 8,505 on that day.

The row first erupted on Thursday morning, as NY Attorney General Letitia James released a report that revealed how Andrew Cuomo's health department had misrepresented the number of nursing home deaths, which it had estimated at 8,500.

The released findings were decried as a large-scale ‘cover-up’, with New York state Conservative Party Chairman, Gerard Kassar, urging Cuomo to resign over ‘manipulating the data’.

The scandal hails back to a directive issued on 25 March overseen by Cuomo, that required nursing homes to accept COVID-19 patients to free up hospital beds.

As a result, over 6,000 COVID-19-positive people were sent back into the nursing homes, exposing staff and residents to the virus.

“An honourable leader would resign under such circumstances,” said Kassar, who accused Cuomo of intentionally manipulating the data.

He added: “Attorney General Letitia James's damning report on New York nursing home deaths has exposed one of the most egregious cover-ups in New York State history. There must be a price to pay.”

Instead of working with us, Governor Cuomo’s only response has been to ruthlessly attack anyone who questioned the state’s disastrous policies, including those from his party, deny any wrongdoing, and hide damning nursing home fatalities data that would implicate his adm. (2/5)

​Elise Stefanik called for New York Attorney General Letitia James and the US Department of Justice to issue subpoenas to Andrew Cuomo and his staff, while President Joe Biden was urged to throw his weight behind a federal investigation into the issue.

"This is now more than a nursing home scandal, this is a massive corruption and cover-up scandal at the highest level of NY State Government implicating the Governor, the Secretary to the Governor, the New York State Health Commissioner and the Governor’s staff." pic.twitter.com/2flai9356z

Republican whip Steve Scalise is currently demanding that Andrew Cuomo hand over all of the state's data on nursing home deaths before 4 February.

🚨🚨 OUTRAGEOUS. Cuomo’s administration has been undercounting COVID deaths in nursing homes—could be 50% higher.

For months Cuomo has tried to blame everyone else for the avoidable deaths his own policies caused.

Now the truth is out.

Time for him to answer for this cover up. pic.twitter.com/qJaWTSGzzo

​He went on Twitter to note that Cuomo's administration had been ‘undercounting COVID deaths in nursing homes’ and it was time for the truth to come out.