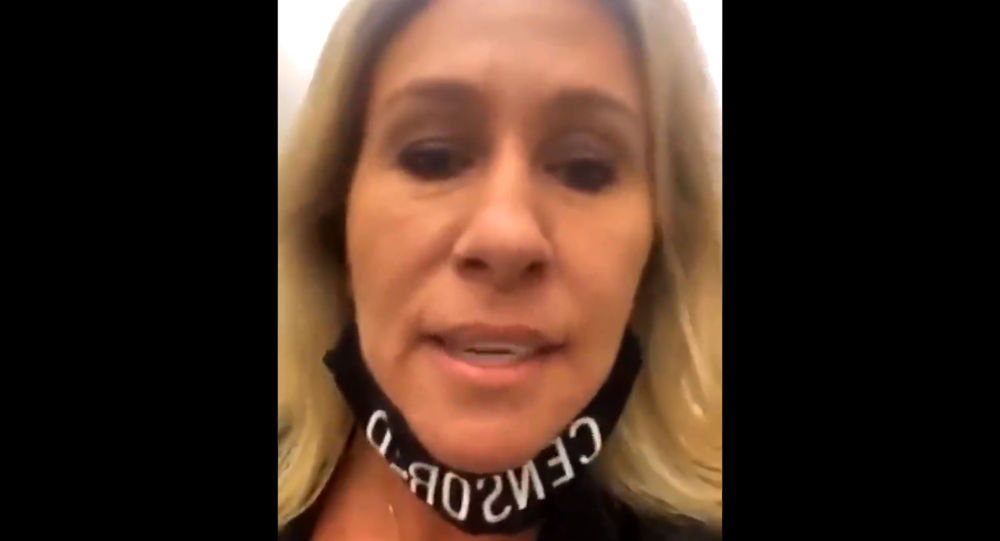 Division is said to be a major problem for US citizens in recent times, particularly when it comes to polarization between the two main political parties in America - Democratic and Republican, which appeared to further escalate after the deadly 6 January Capitol attack by Trump supporters.

A squabble between two House Representatives, Democrat Cori Bush and Republican Marjorie Taylor Greene, resulted in Bush seeking to move her office away from Greene's out of "safety" concerns - a move reportedly greenlighted by House Speaker Nancy Pelosi, according to Fox News.

The conflict between the two unfolded in Twitter, with Bush denouncing Greene for "berating" her in a hallway while the Republican failed to properly wear a mask.

"A maskless Marjorie Taylor Greene & her staff berated me in a hallway", Bush tweeted on Friday. "She targeted me & others on social media. I'm moving my office away from hers for my team's safety."

The reaction from Greene was swift, as she tweeted a video showing her walking through the Congress hallway. Her mask is seen down on her chin when someone - allegedly Bush - asks her to "follow the rules and put on a mask".

A member of Greene's team is heard to shout: "Stop inciting violence with Black Lives Matter!", and the Republican Representative is heard to say: "Don't yell at people".

When she is again urged to put on a mask, Greene also shouts, yelling: "Stop being a hypocrite". Then she pulls the mask up and is heard saying: "This is how it is here now. This is arguing with my Democrat ... supposed colleague."

It’s all on video!

You instigated and attacked me, not the other way around.

You got caught in a lie.

You support and encourage BLM domestic terror. You led a mob to threaten the lives of the McCloskey’s.

​In an interview with Fox News, Greene said that she does not "wish harm on anybody, not even my worst enemy", but then insisted that "she started it by screaming at me".

"Cori Bush, she's accusing me of attacking her and claiming she's got to move her office. No. That's crazy," Greene said, cited by Fox. "I'm just so lucky that I was actually ranting and raving about that stuff on Facebook Live that I have that video."

© REUTERS / Erin Scott
U.S. Rep. Marjorie Taylor Greene (R-GA) wears a "Trump Won" face mask as she arrives to take her oath of office as a member of the 117th Congress in Washington

Continuing her squabble with Bush, Greene questioned whether her opponent had at some point denounced "radical BLM violence and apologize to the McCloskey’s", referring to a couple in St Louis photographed standing in front of their house with guns as Black Lives Matter protesters were passing by. The two have accused demonstrators of crossing onto their property.

The couple was later charged with the felony of unlawful use of a weapon.

Speaking to MSNBC about the incident with Greene, Bush said: "I moved my office because I'm here to do a job for the people of St. Louis. They deserve that. And what I cannot do is continue to look over my shoulder wondering if a white supremacist in Congress by the name of Marjorie Taylor Greene or anyone else, cause there are others, that they are doing something or conspiring against us."

Greene is currently facing calls from lawmakers to resign, as Democratic Representative Nikema Williams filed a censure resolution that cites a reference to Greene calling for the "execution" of House Speaker Nancy Pelosi.

"We are calling on the censure and resignation of Rep. Majorie Taylor Greene", Williams tweeted on Friday. "A Member of Congress who touts discredited conspiracy theories, entertains violence against lawmakers & mocks the tragic loss of life during the Parkland Shooting does not belong in the People’s House."

​Hashtag #ExpelHerNow settled in US Twitter trends as Democrats and some Republicans call for a hearing to expel Greene, pointing at her 'liking' Facebook posts that call for violence against Democratic lawmakers and several FBI agents.

Greene has stated previously that she had "teams of people manage my pages", claiming that some of the posts that were liked did not represent her views.

"They are taking old Facebook posts from random users to try to cancel me and silence my voice", Greene asserted, afterwards claiming that "they are coming after me because I'm a threat to their goal of Socialism".

The dump Greene campaign was fueled by a video showing her during the pre-election period, in which she is heard saying "The only way you get your freedoms back is it’s earned with the price of blood".

SCOOP: In a pre-election video just uncovered by Mother Jones, Republican Marjorie Taylor Greene is seen endorsing political violence. “The only way you get your freedoms back is it’s earned with the price of blood," she says. More here: https://t.co/GcXZQY0K30 pic.twitter.com/lSA6JUeWjM

Conflicts between the two parties come amid the deadly January 6 attack on the Capitol building by Trump supporters that saw 5 people dead, including a Capitol police officer, prompting fears of more violence to come.

As debates unfold over the necessity of additional security measures in the Capitol building and in Washington DC - and particularly over whether congresspeople can be armed when inside Capitol - Speaker Pelosi has criticized legislators who bring weapons to Congress, Greene among them.

Pelosi labeled weapons bearing lawmakers as "the enemy within", pointing out that "a supplemental [budget line item] for more security" may be needed due to the situation.