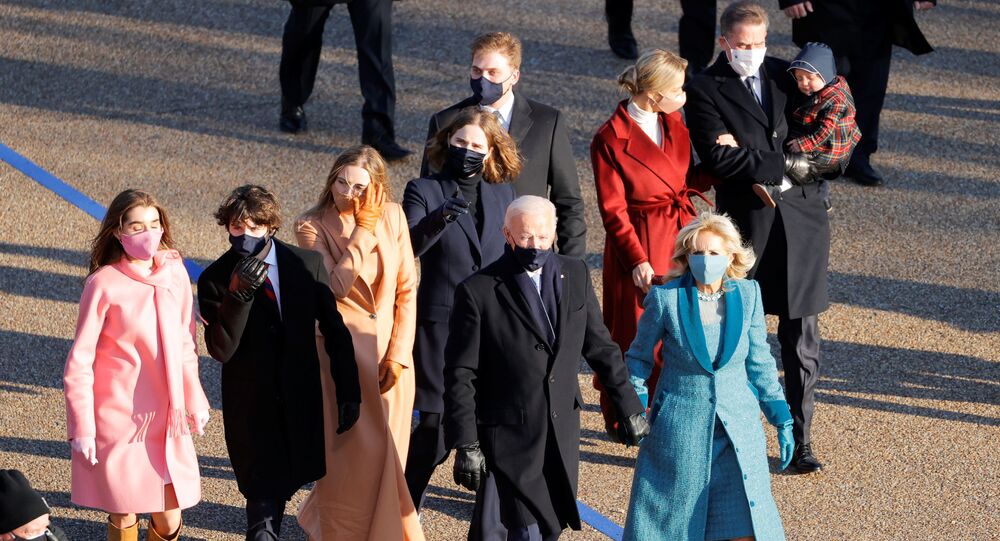 Mysterious and Spooky — The Biden Family and its Dodgy Dealings

From Ukrainian oligarchs and Chinese tycoons to neo-Nazi street-fighters and a former 'Exalted Cyclops' of the Ku Klux Klan, US President Joe Biden and his already-infamous son have some interesting friends.

US President Joe Biden may feel secure after his inauguration — protected by 25,000 troops and swathes of bullet-proof glass — but the skeletons in his closet aren't going away.

Thursday's revelation that Biden warned his brother Frank: “For Christ’s sake, watch yourself,” in case his election campaign was successful speaks of a family with something to hide, even if website Politico's source tried to brush it off as only half-serious.

Former president Donald Trump was not shy of accusing what he dubbed the "Biden crime family" of all kinds of dodgy dealings — and even being an agent of a foreign power. The Democrat-controlled House of Representatives went as far as to impeach Trump just for asking Ukraine's president to probe them.

But what is the substance of the many allegations against the new president and his clan?

Trump's election claim that Biden was a real-life Manchurian Candidate gained credence this week when several leading Congress Republicans urged the University of Pennsylvania's Biden centre to disclose its links to China. Since the centre was set up in 2017, Chinese funding to the university allegedly increased more than three-fold from $21 million in the preceding three years to $72 million to date.

A letter from representatives James Comer, Jim Jordan and Virginia Foxx asked for records of all gifts and contracts from the Chinese government, the Communist party or businesses. They also demanded copies of all communications between the China and university officials — which include the president and newly-appointed Secretary of State Antony Blinken.

The three Republicans pointed out that Biden's son Hunter's business dealings in China were still the subject of a federal probe.

The liberal media and social media giants did a good job of burying the story of Hunter Biden's "Laptop from Hell", but images of the president's son sleeping with prostitutes and reportedly using drugs already circulating on the internet.

Hunter Biden is still under federal investigation for what he calls "tax affairs" related to his various business dealings in China. His dad has kept FBI director Christopher Wray on the payroll, and even signalled his approval weeks before taking power.

Republican senators have already questioned why the investigations were kept under wraps for over a year, when they were relevant to the 2019-20 impeachment proceedings against Trump.

In fact it fell to Trump's personal attorney and former New York mayor Rudy Giuliani to reveal the laptop's existence and details of its contents during the presidential campaign — including alleged attempts by Hunter to peddle his father's political clout to Ukrainian and Chinese businessmen.

House Democrats launched the impeachment after Trump asked Ukrainian President Volodymyr Zelensky to investigate the relationship between the Bidens, Ukarainian gas firm Bursima holdings and the Kiev government, installed with US support after president Viktor Yanukovych was overthrown by the pro-Western Maidan Square protests of 2014.

Biden, then vice-president to Barack Obama, pressured Zelensky's predecessor Petro Poroshenko in December 2015 to fire prosecutor-general Viktor Shokin after the state attorney launched money-laundering, tax-evasion and corruption allegations against Burisma, which had appointed Hunter Biden to its board.

Trump publicly questioned Hunter Biden's qualifications to sit on the board of a major energy firm, when the stand-out his resumé was a discharge from the US Navy Reserve for failing a drug test for cocaine. But Democrats and the US liberal media dismiss as a conspiracy theory the notion that the Obama-Biden administration backed a putsch by neo-Nazis just so Hunter could land a well-paid job.

'Friend and Mentor' was KKK Leader but 'Not a Grand Wizard' — Phew!

Despite mainstream media attempts to "fact check" the controversy away, Netizens have made much of Biden's 2010 eulogy for fellow-Democrat West Virginia senator Robert Byrd — a former leading member of white supremacist vigilante group the Ku Klux Klan (KKK).

Byrd refused to fight against fascism in the Second World War, telling segregationist Mississippi senator Theodore G. Bilbo in a letter that he would rather see the US flag struck down than serve alongside black soldiers.

"I shall never fight in the armed forces with a negro by my side," Byrd wrote. "Rather I should die a thousand times, and see Old Glory trampled in the dirt never to rise again than to see this beloved land of ours become degraded by race mongrels, a throwback to the blackest specimen from the wilds."

​A photo of Biden and Byrd together makes the rounds every time the president or other Dems accuse Republicans of pandering to racists.

​The media fact-checkers are anxious to point out how wrong the posts are to call Byrd a former Grand Wizard of the KKK. He was only a chapter head — or "Exalted Cyclops" — of the organisation notorious for lynching black people and civil rights campaigners, they stress.