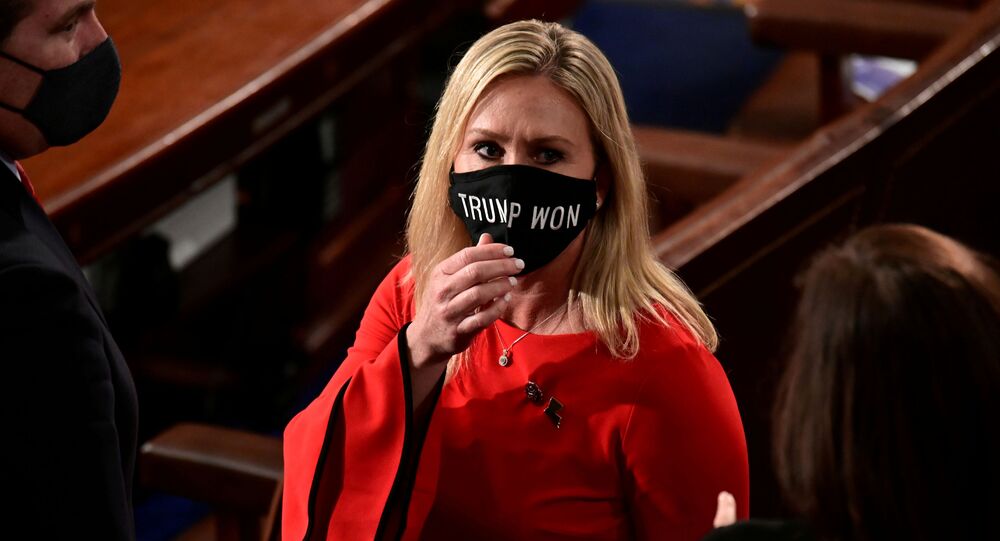 Rep. Marjorie Taylor Greene (R-GA) rose to national attention this week after a CNN report detailed the lawmaker's support for conspiracy theories and her social media posts calling for violence against Democratic members of the US Congress.

Rep. Robert C. "Bobby" Scott issued a news release Thursday that made loose reference to comments and social media activity linked to Greene, who was recently appointed to the House of Representatative's Education and Labor Committee.

"House Republican leadership is responsible for appointing Republican Members to the Education and Labor Committee who can make a positive contribution to our work," he wrote. "These appointments are supposed to reflect their commitment to serving students, parents, and educators."

The congressman ran down the list of allegations leveled against the lawmaker, including her "hoax" comments regarding the 2012 and 2018 school shootings at Sandy Hook Elementary School in Sandy Hook, Connecticut, and the Marjory Stoneman Douglas High School in Parkland, Florida. Most of her claims are tied to social media accounts which appear to have been run by Greene or her team.

Facebook posts by the GOP lawmaker show that she referred to David Hogg, a survivor of the 2018 Parkland shooting tragedy who became an advocate for common sense gun control in the US, as "Little Hitler."

Greene has taken down many of the Facebook statuses linked in our story, including calling @davidhogg111 "little Hitler," and saying "bingo" that he is "bought and paid little pawn" when someone called him a "paid actor."

"House Republicans have appointed someone to this Committee who has publicly endorsed violence against elected officials," Scott pointed out, referring to an article published on Tuesday by CNN. The "KFILE" piece highlighted concerning social media posts made by teh GOP lawmaker from 2018 and 2019.

The outlet detailed that Greene's Facebook account had liked a comment that said "a bullet to the head would be [a] quicker" way to eliminate Pelosi from Congress.

In one post, from January 2019, Greene liked a comment that said "a bullet to the head would be quicker" to remove House Speaker Nancy Pelosi. In other posts, Greene liked comments about executing FBI agents who, in her eyes, were part of the "deep state" working against Trump. pic.twitter.com/7lfsZYUSxx

Speaking to reporters inside the Capitol on Thursday, House Speaker Nancy Pelosi (D-CA) asserted that her legislative chamber needs additional funding for the safety of all lawmakers because "the enemy is within the House of Representatives."

Andy Harris (R-MD) and Lauren Boebert (R-CO) have both expressed a desire to be allowed to bring firearms on the House floor. The latter part is believed to refer to Greene, whose social media posts have been accused of inciting violence against lawmakers.

When @mtgreenee posted this message, I took it as a threat of violence to members of congress who look like me. This is why @FBI @HouseDemocrats need a full investigation of Greene's #Insurrection role. pic.twitter.com/Y52GYzfrgp

Sputnik reported earlier this week that Greene was facing calls to resign following the viral exposure of her 2018 and 2019 social media posts and liked content. Additionally, the unearthing of conspiracy theories and opinions of the lawmaker by CNN's KFILE prompted her to issue a statement on the matter.

Fake News CNN is writing yet another hit piece on me focused on my time before running for political office.

I will never back down to the enemy of the American people and neither should you. pic.twitter.com/K3JuvqrDGS

"It is absolutely appalling, and I think that the focus has to be on the Republican leadership of this House of Representatives for the disregard that they have for the death of those children," Pelosi said, as reported by The Hill, referring to GOP leadership appointing Greene to the education committee.

"What could they be thinking? Or is thinking too generous a word for what they might be doing?" she asked. "You're just going to have to ask them why they thought that that raised itself to the level of something appropriate to do in the Congress of the United States."

Scott concluded his Thursday release by asking Republican House Minority Leader Kevin McCarthy to "explain how someone with this background represents the Republican party on education issues."

When asked about Greene, a spokesperson for McCarthy expressed that the "comments are deeply disturbing" and will be addressed with Greene, as "Leader McCarthy plans to have a conversation with the Congresswoman about them," according to The Hill.

‘Window is Closing’: Iranian Diplomat Says US ‘Must Act Quickly’ to Rejoin JCPOA