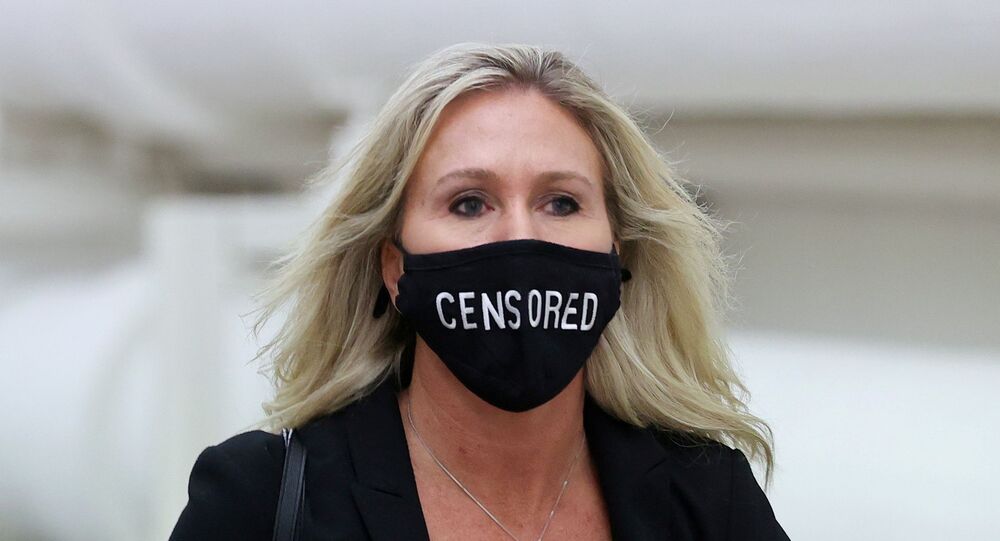 The lawmaker has already come under fire because she supported former President Donald Trump's allegations of electoral fraud and she campaigned for the 2020 voting results to be denied certification.

GOP House member Marjorie Taylor Greene is facing calls to resign by Democrat lawmakers and harsh criticism from her fellow Republicans after the media unearthed her alleged support for various conspiracy theories on social media between 2018 and 2019.

The media reports showed Greene's Facebook account liking and commenting on conspiracy theories regarding the alleged staged nature of recent mass shootings in US schools, purported child abuse and satanic rituals practised by top politicians and celebrities, as well as QAnon conspiracy theory. Some of her alleged actions on social media platforms also seemed to support the idea of ousting or killing certain prominent Democrats, such as House Speaker Nancy Pelosi, and FBI agents who had presumably been disloyal to former President Trump.

House Democrat Jimmy Gomez announced introducing a resolution to expel Greene from Congress and another Democrat, Georgia senator Raphael Warnock, described the Republican's actions and old social media comments as "dangerous and unacceptable". Former Secretary of State and presidential-hopeful, Hillary Clinton, alleged that Greene "should be on a watch list. Not in Congress". And a former FBI agent, who was fired for perceived anti-Trump bias while being part of RussiaGate probe, Peter Strzok suggested that the GOP congresswoman should be investigated over her online statements and removed from office.

You and @CNN are both co-conspirators in the biggest LIE ever told to the American people!

You used Steele’s lying dossier to lie some more to FISA & spy on @carterwpage.

Greene, who has just been elected to the House by Georgia's 14th district, dismissed the media claims. Although she did not deny the existence of supportive comments and "likes" under controversial social media posts, the lawmaker stressed that it does not necessarily reflect her views since her Facebook account was managed by various people.

The Republican freshwoman strongly condemned attempts to "cancel" and "silence" her over actions on Facebook dated between 2018 and January 2019.

Fake News CNN is writing yet another hit piece on me focused on my time before running for political office.

I will never back down to the enemy of the American people and neither should you. pic.twitter.com/K3JuvqrDGS

This is not the first time Greene has faced calls for resigning: the first time she encountered such attempts was just several days after starting her term as House lawmaker because of her support of efforts to deny certification to the 2020 election results and claims that the voting was rigged against Republican Donald Trump. Some of the fellow House members accused her of being an "accomplice" to 6 January storming of the Capitol, which left five people dead and postponed certification on that day.