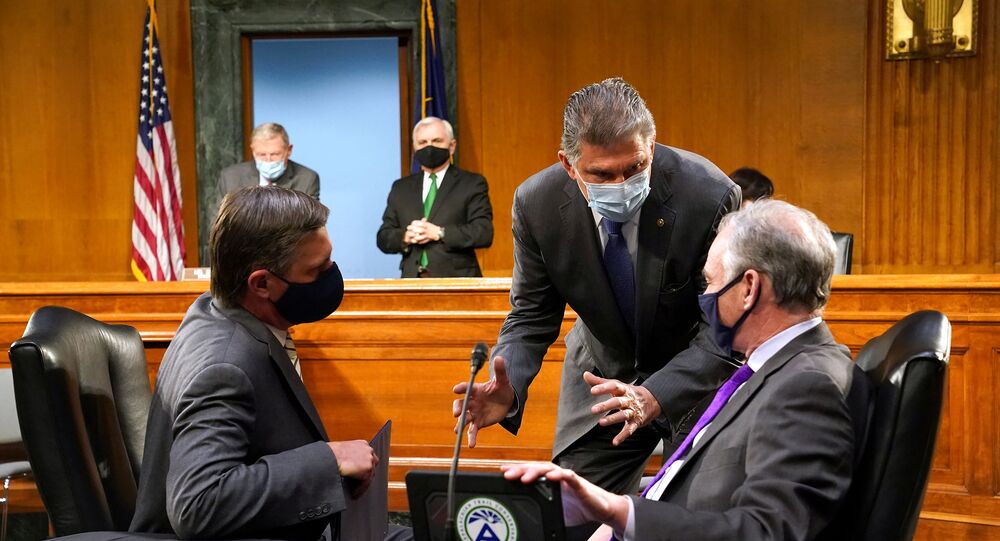 Former US President Donald Trump found himself again in the cross hairs of House Democrats - and some Republicans - after being impeached for an unprecedented second time over charges of "incitement of insurrection" prior to the deadly 6 January Capitol riot.

Democrat Senator Tim Kaine, accompanied by GOP Senator Susan Collins, has suggested considering "alternatives" to "hold Trump accountable" if the Senate does not also convict him on his second impeachment, US media reported Wednesday.

He also said he was "contemplating an introduction next week" while continuing discussions with fellow senators.

According to Axios citing Kaine himself, a censure resolution would declare the deadly 6 January Capitol siege an insurrection against the US Constitution and a violent effort to stop Congress from "undertaking its constitutional duty to count electoral votes".

"It finds that Trump 'gave aid and comfort' to the insurrectionists by 'repeatedly lying about the election, slandering election officials, pressuring others to come to Washington for a wild event and encouraging them to come up to Congress'", Axios described the proposed resolution.

The language for the resolution is reportedly taken from Section 3 of 14th Amendment, which says that no person who, "having previously taken an oath", "shall have engaged in insurrection or rebellion against the same, or given aid or comfort to the enemies thereof".

Kaine reportedly believes his suggestion to be an alternative to deliver consequences for Trump that would prevent him from again taking office, but does not require a trial or a two-thirds vote. The latter, according to many observers, is unlikely to happen, since at least 17 Senate Republicans would need to join 50 Democrats to secure enough votes to convict Trump, and only five GOP Senators voiced intention to do so during the Tuesday vote.

Republican Senator Collins, who is said to be working with Kaine on a censure resolution, reportedly also voiced doubt that Trump would be convicted in the Senate.

"It seems to me there is benefit in looking at an alternative that might be able to garner bipartisan support", Collins told reporters on Wednesday, according to Axios. After being asked whether she would like to propose the resolution before or after the trial, she responded: "No, it would be in lieu of the trial."

Does the Initiative Have Support of Other Democrats?

According to reports, the two Senators spoke to 40 colleagues in Congress about a censure vote.

The initiative was not met with enthusiasm, even among the Democratic party, as Senate Majority Leader Chuck Schumer insisted in his floor speech that "there will be a trial".

"The Democrats are very intent on going through the impeachment process," Thune said, cited by CNN. "That's the vote that matters to them. I've heard some rumblings (about censure) but not serious discussion that had support from enough Democrats or Republicans for that matter to make this a realistic option."

Democratic Senator Ron Wyden and independent Senator Bernie Sanders said they would prefer to focus on the work that Congress is scheduled to do.

After House Democrats impeached Trump for an unprecedented second time in US history, accusing him of "incitement of insurrection" for the deadly 6 January Capitol riot, the impeachment article was delivered to the Senate, with trial arguments expected to begin on 9 February.

Trump, who left the Oval Office on 20 January, denies responsibility for encouraging the violence and called his second impeachment "a hoax" and "a continuation of a witch hunt".