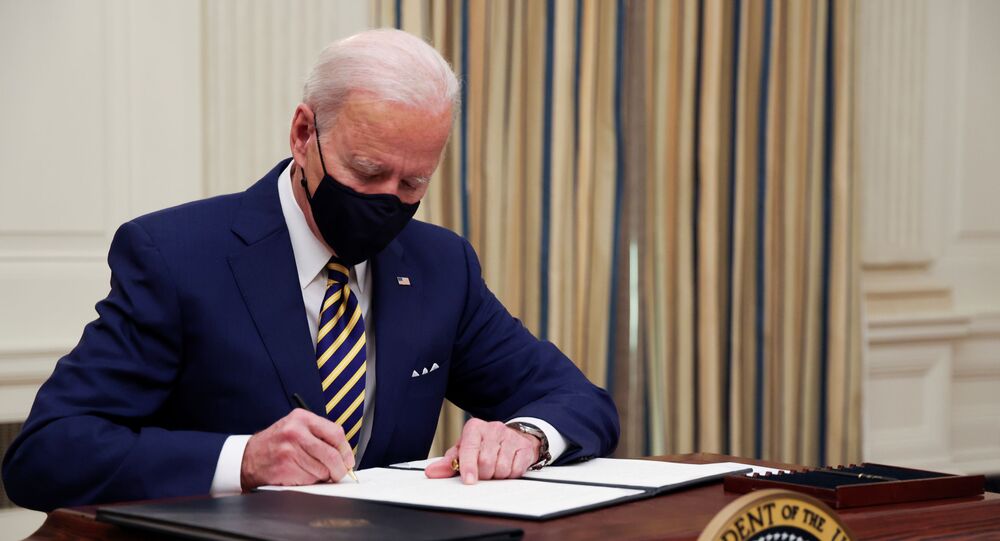 Former US President Donald Trump withdrew from the multilateral agreement in May 2018, prompting the Islamic Republic of Iran to gradually roll back its commitments on uranium enrichment since 2019. Now that Joe Biden has assumed office, Tehran is calling upon the White House to make the first step and lift all sanctions on Iran "unconditionally", warning against "extracting concessions" from the Islamic Republic, as Foreign Minister Javad Zarif outlined in his recent op-ed for Foreign Affairs magazine. However, Blinken has made it clear that Washington's broader agreement with Iran should also include the Middle Eastern country's ballistic missile programme and regional activity, something that Tehran vehemently opposes.

"Trump used to say that he wanted to renegotiate the nuclear agreement, and he wanted Iran to do things with its missile programme and regional influence", says Foad Izadi, professor of political communication at the University of Tehran. "The Biden administration, at least so far, is basically saying what Trump used to say, in a nicer way, basically, in a different terminology, but the content is the same".

In August 2020, Trump pledged to return to US-Iran nuclear negotiations after re-election, explaining his "maximum pressure" policy towards Tehran as a way to persuade the Islamic Republic to negotiate a broad bilateral agreement instead of the 2015 JCPOA deal.

Izadi argues that it was Washington that left the agreement in May of 2018 and that Iran waited more than a year until it decided to reduce some of its commitments. Therefore, it's up to the US to make the first step and go back to the situation the countries had before January 2017, according to the academic.

The professor offers a second option, with the US and Iran going back step by step, bemoaning the fact that the Biden administration has apparently opted for a third scenario under which Iran should go back first. And after that is done, the White House is seeking to change the agreement and get more concessions from Iran, although previously they criticised Trump for such an approach, the academic adds.

The aforementioned strategy is not going to be acceptable in the eyes of Tehran, especially given the erosion of trust in US political institutions in Iran, according to Izadi. In addition to this, there is no guarantee that Donald Trump, or Mike Pompeo, or any other American Iran hawks won't return to power in 2024, the academic presumes.

"The Biden administration’s first priority will be to try and reach an improved agreement with Iran, and to reassert American leadership in the Middle East", says Dr Emmanuel Navon, an international relations expert who teaches at Tel Aviv University and at the Herzliya Interdisciplinary Centre in Herzliya, adding that it's hardly surprising that the White House wants to amend the JCPOA given that the situation has changed since 2019.

It was reported earlier this month that Iran had started to enrich uranium to a purity of up to 20% at the Fordow Fuel Enrichment Plant, as the International Atomic Energy Agency (IAEA) projected on 1 January 2021.

Biden does not intend to return to the JCPOA without any changes and without holding Iran accountable for enriching uranium beyond the limits allowed by the agreement, Navon points out, adding that "there is no disagreement between the Biden administration and its Middle East allies, including Israel, that the JCPOA’s 'sunset clause' must be significantly extended and that a more robust and reliable system of monitoring must be established".

While Israeli Prime Minister Benjamin Netanyahu opposes a return to the Iran nuclear accords, the Jewish state may somewhat soften its stance in case prime ministerial candidate Gideon Saar wins the March snap elections, according to Navon, who believes that Saar "stands the best chance of replacing Netanyahu".

Saar, who was once one of Netanyahu’s most loyal and vocal supporters, told the Associated Press in mid-January that although he respected the Israeli prime minister's campaign against the Iran nuclear programme, a new approach is needed to amend the original agreement and make sure that the Islamic Republic never develops a nuclear weapon.

"Whether or not renewed negotiations between the US and Iran produce an agreement, the Biden administration opposes a nuclear Iran, and it will further increase and reinforce the partnership between the US and its Middle East allies, including Israel", the Israeli scholar emphasises.