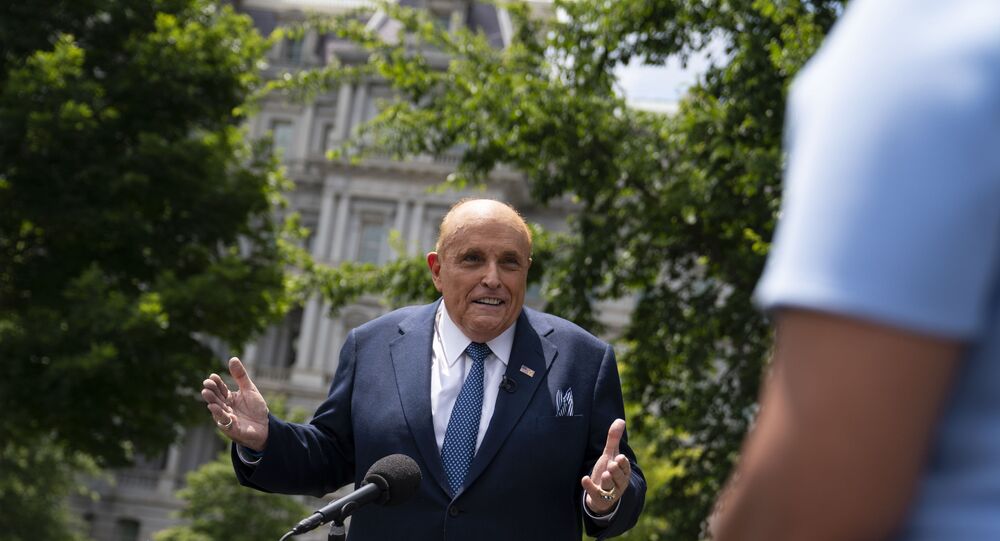 'I'm a Crazy Guy': Giuliani Says Dominion's $1.3 Bn Defamation Lawsuit Might Be Good News for Him

The former New York mayor and Trump's personal lawyer recently came into the public spotlight over his support of the ex-president's claims of massive voter fraud that purportedly took place in the 2020 election. As a part of the claims, Giuliani peddled a theory that Dominion's voting machines were part of the alleged schemes.

Trump's lawyer and one of the key members of the ex-president's effort to dispute the 2020 election results, Rudy Giuliani, has said he is not afraid of the $1.3 billion lawsuit recently filed against him by Dominion Voting Systems. The company claims Giuliani's activities as a member of Trump's legal team inflicted damage to its reputation due to the lawyer pushing accusations of Dominion products being part of a widespread voter fraud effort in 2020.

"What do you think I am, some kind of jack*ss? That's intended to frighten me, you want to frighten me. You want to scare me […] Well, I tell you I'm a crazy guy, I really am, I'm just really crazy", Giuliani said on his own WABC programme "Chat with the Mayor".

The lawyer went on to claim that the lawsuit might actually benefit him. Giuliani suggested that the suit would allow his "independent experts" to do something that no judge had allowed during the legal disputes over the 2020 election – to probe the Dominion machines for engaging in voter fraud.

"Not only haven't you scared me, you've actually given me something that I couldn't get through the censorship that's been set up so nobody can see your machines", Giuliani added.

The allegations remain unconfirmed after several courts, where they were reviewed alongside other voter fraud claims by Trump's team, dismissed the cases linked to disputing the election results. The courts did so mostly on the grounds that the lawsuits lacked evidence, despite the ex-president and his campaign claiming otherwise.

The Trump legal team's claims of Dominion machines boosting the results in favour of Democrat Joe Biden stem from a confirmed case in one county where such voting machines actually flipped Republican votes to the Democrat. The case, however, was written off as the result of a "human error". The ex-president's team claimed that such an "error" might have been intentional, and could have taken place around the country. One election lawyer strongly supporting the Trump campaign's claims of voter fraud, Sidney Powell, is also facing a lawsuit from Dominion Systems after she claimed that foreign governments, namely Venezuela, had had a hand in the voting machines' creation, with the aim of affecting the election outcome. However, she failed to produce proof of the claims and is now facing accusations over spreading disinformation.