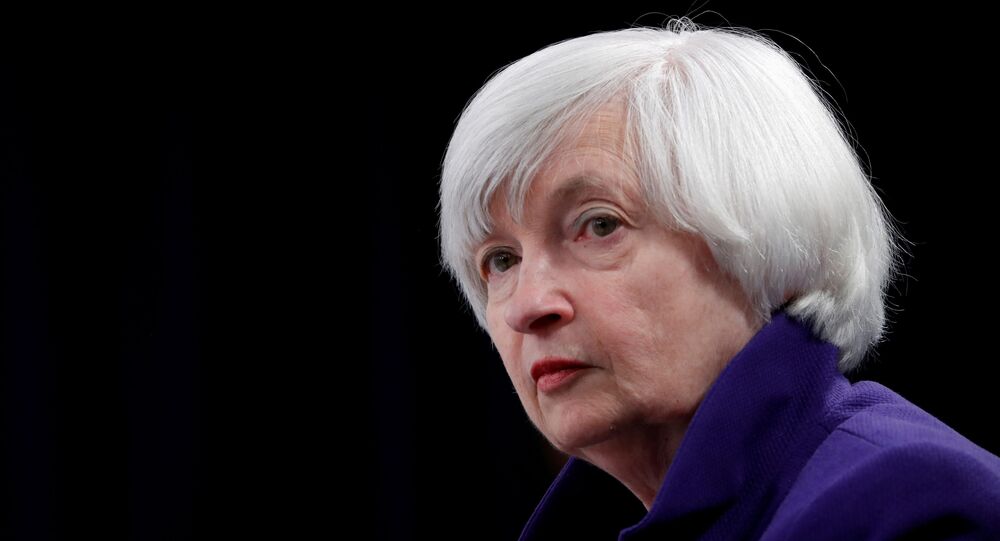 Who is Janet Yellen, New US Treasury Secretary?

Janet Yellen, the Treasury Secretary nominated by US President Joe Biden, was confirmed for the position by the Senate on Monday, with 84 Senators supporting her candidacy and 14 voting against.

The first woman to become the head of the US Department of Treasury, Janet Yellen is the third member of the Biden administration to win confirmation, after Defense Secretary Lloyd Austin and National Intelligence Director Avril Haines.

According to what Democratic Majority Leader Chuck Schumer said before the Senate vote, Yellen had bipartisan support. Schumer also praised her "breathtaking range of experience'' and noted "just how well suited she is to manage the economic challenges of our time [...] particularly during this moment of economic crisis".

Before being confirmed by the Senate, Yellen was unanimously approved for the job by the Finance Committee on 21 January.

The newly-sworn Democratic president has assembled a Cabinet remarkably welcoming to many former Obama officials, and Yellen is no exception, as the former two-term president appointed her the head of the US Federal Reserve in 2014. In 2018, she stepped down from the position after Obama's successor, Donald Trump, did not reappoint her.

From 1994 to 1997, Yellen was a member of the Federal Reserve Board of Governors, moving on to chair the Council of Economic Advisers under former US President Bill Clinton, until 1999.

A vocal critic of the economic policies of Trump, Yellen is widely considered to be a 'monetary dove', someone who puts issues such as low unemployment and social needs above low inflation.

Before her confirmation hearing in the Finance Committee last week, Yellen said that America faced the risk of a "longer, more painful recession" unless prompt action is taken. Particularly, she urged quick action on a coronavirus relief package that would provide additional $1,400 in payments to individuals making below $75,000 annually, as well as expanding unemployment benefits and aide for small businesses.

She has also voiced her support for raising the minimum wage in the US, now at $7.25 per hour, saying that "the president’s [$15 per hour] minimum wage will be phased in over time".

The challenges we’re facing are unprecedented, and addressing the economic and public health crisis will require bold action. As we look to the new year, I want the American people to know that, if confirmed, I will work every day to build an economy that works better for us all.

​Her stance, however, received criticism from some Republicans who claim that the package is too large, citing a federal budget deficit that, under the Trump administration, soared above $3 trillion.

Under Yellen, the US Treasury Department is also set to oversee Biden's plans to raise the corporate tax rate to 28% from 21% and increase taxes on those making over $400,000 a year.

She also expressed her support to working with the Organisation for Economic Co-operation and Development (OECD) to update global digital taxation rules, believing it will secure "the competitiveness of US companies".

Regarding the US national currency, Yellen pledged to maintain "a sound economy and confidence in our financial system" and help the US dollar to remain the "world’s dominant reserve currency".

"The value of the US dollar and other currencies should be determined by markets", she said. "Markets adjust to reflect variations in economic performance and generally facilitate adjustments in the global economy."

The newly-confirmed Treasury Secretary said that she would conduct an immediate review of US financial sanctions policy to make sure it is being used "strategically and appropriately".

During her Finance Committee hearing, Yellen shed light on her position on US relations with Russia.

"If confirmed, I will work closely with the White House and counterparts at other agencies across the administration on US policy toward Russia. I commit to rigorously enforcing sanctions targeting Russian actors for territorial aggression in Eastern Ukraine and Crimea and other threats to US national security", she said.

When asked about her stance on China, Yellen referred to Beijing as "our competitor", saying that "we must ensure that it is not allowed to violate our sanctions".

"The Biden administration will engage in a whole-of-government approach to China that uses our available tools in a manner that is designed to achieve our economic, national security, and foreign policy goals", she told the committee. "US efforts to maintain its technological and innovation edge, including in sensitive “dual-use” technologies, must focus on reshoring critical supply chains. If confirmed, ensuring that the United States is able to compete in the global economy will be a top priority."

She repeatedly said that the Treasury Department will "make use of the full array of tools to counter China’s abusive economic practices and hold Beijing accountable".

The US labeled Beijing "a currency manipulator" in 2019 after the yuan fell to an 11-year low. The US Treasury Department at the time asserted that Chinese authorities manipulated its currency and therefore violated its "G20 commitments to refrain from competitive devaluation".

Regarding her position on Iran, Yellen said that the US is committed to "ensuring that Iran takes the appropriate steps to resume compliance" and reiterated that Tehran will only be given sanction relief if it abides to nuclear constraints.

"Furthermore, if confirmed, I will ensure that Treasury continues its important work to combat Iran’s support for terrorism and abuse of human rights", she said at the hearing after agreeing that Iran is "the world's largest sponsor of terrorism".