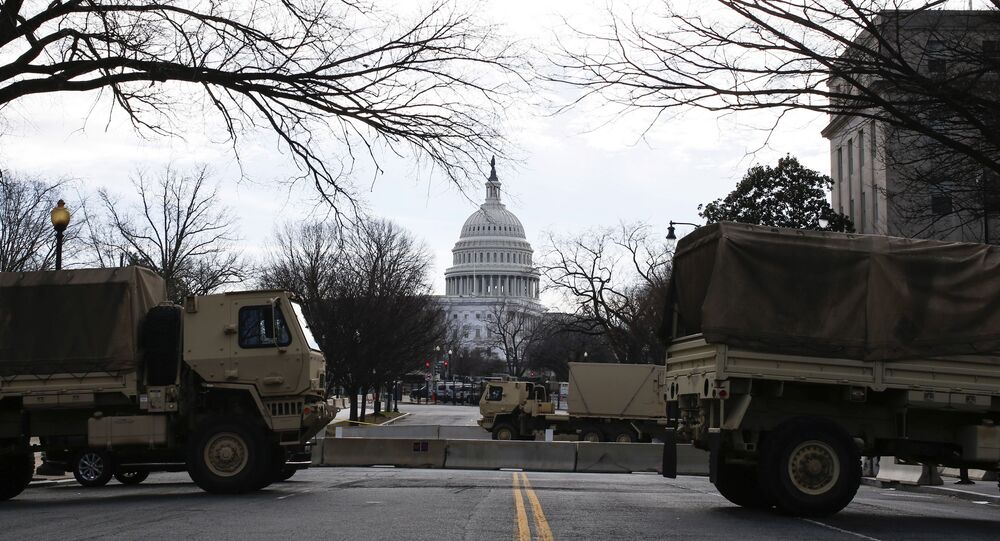 Last week, NPR revealed that almost 20 percent of the individuals charged over the 6 January storming of the Capitol had a military background, among them active duty troops and veterans. Democrats characterized the raid on the Capitol as an attempted coup and have sought to expel potentially ‘unreliable’ elements from both the military and police.

House and Senate Democrats are brainstorming ways to root out extremists and racists from the military using legislation, with one plan including inserting language to that effect into the 2022 National Defence Authorisation Act, The Hill reports, citing lawmakers.

“The attack on our Capitol was an insurrection fuelled in large part by groups that espouse the same white extreme white supremacists’ views – the groups that actively recruit veterans and from the ranks of our military,” Anthony Brown, Democratic representative from Maryland, told the outlet.

“We must recommit ourselves to rooting these beliefs out of our ranks, protecting our service members from radicalisation and ensuring all Americans feel safe serving the country we all love,” Brown added, stressing that he has been in contact with the Biden White House and newly appointed Pentagon chief Lloyd Austin on the matter.

© REUTERS / MIKE SEGAR
Biden Calls Capitol Raiders ‘White Supremacists, Anti-Semites’, Demands Prosecution
The lawmaker’s broad brush characterisation of the Capitol raiders was echoed by Biden earlier this month, with the president describing the protesters as “a bunch of thugs, insurrectionists, white supremacists, anti-Semites,” and “domestic terrorists” who should be treated as such.

The Pentagon has already been ordered to review its policies on potential extremism in the military in a defence bill passed 1 January, but Democrats in the House and Senate want to speed up the process.

In congressional testimony last week, Austin told senators that he would “fight hard” to remove “racists and extremists” in the military’s ranks, and said it would be impossible to protect America from its enemies “if some of those enemies lie within our own ranks.”

A spokesperson for Tim Kaine, the Virginia Democratic who serves on the Senate Armed Services Committee, said the committee would “carefully monitor” the implementation of previously agreed upon anti-extremism legislation, with “future legislation” to be “informed by what the committee learns from the DoD’s updates.”

The office of Senator Michael Bennet, a Colorado Democrat, similarly said that the lawmaker is working with his colleagues and the Biden team to “root out hate in our military.”

Florida Democrat Representative Stephanie Murphy has already introduced a related bill which would ban anyone who took part in the Capitol riot, or who believes in the QAnon conspiracy theory, from being approved for federal security clearance. The conspiracy theory, which claims that the Trump administration was involved in fighting an elite group of Satan-worshippers and child abusers, has already led Twitter to purge the accounts of multiple high profile supporters of the former president, including ex-national security advisor Michael Flynn.

© AP Photo / Dario Lopez-MIlls
Twitter Bans Accounts of Flynn, Powell Over QAnon Conspiracy Theories - Reports
Along with former and current members of the military, investigations have shown that multiple off duty law enforcement officers were also involved in the 6 January protests, with their backgrounds helping them to organise the assault.

Independent media investigations have shown that while some radicalised far-right elements were involved in the Capitol violence, the protests also included many ordinary Trump supporters who genuinely believe the election was stolen from him.

Ahead of Joe Biden’s inauguration, the Pentagon and the FBI vetted the 25,000 National Guard troops called into the Capitol to ensure security ahead of and during the ceremony. The probe prompted 12 troops to be pulled from inauguration duty, all of them reportedly tied to right-wing militias or posting unspecified ‘extremist’ views online.

At least 27 of the 140+ individuals charged with the Capitol attack to date have some experience in the military, according to a recent NPR investigation.  Ashli Babbitt, an Air Force veteran and Trump supporter, was one of the four protesters who died after breaking into the Capitol. A Capitol police officer was also killed during the unrest.

Google Announces Launch of Vaccination Sites Across the US