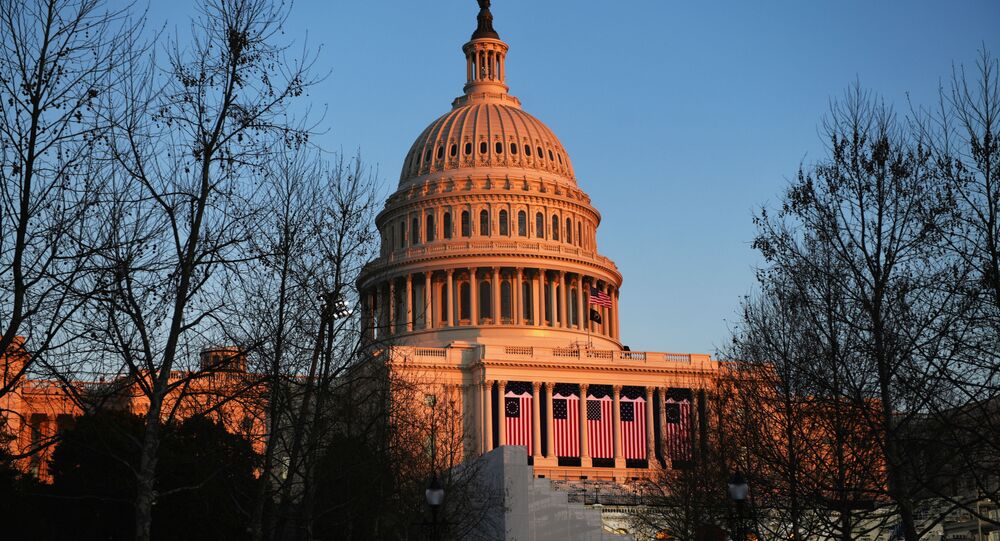 The second Senate trial of Donald Trump is scheduled to begin the week of 8 February, Senate Majority Leader Chuck Schumer has announced, as the former US president is facing a second impeachment for "incitement of insurrection" following the Capitol riots on 6 January.

As the date set for the second trial of former President Donald Trump approaches, reports suggest there has been menacing ‘chatter’ indicating potential danger to the lives of legislators, writes The Associated Press, citing a US official speaking on condition of anonymity.

Federal law enforcement officials are currently probing a number of threats targeting members of Congress, claims the source. There are concerns that legislators might be attacked outside the US Capitol, or even killed.

Reports are also being followed up indicating that armed protesters could reassemble in another attempt to breach the Capitol building. The latter concerns have prompted US Capitol police and other federal law enforcement to urge that thousands of National Guard troops remain in Washington ahead of the Senate trial, added the source.

© REUTERS / TOM BRENNER
Barbed wire is seen on a fence as U.S. President-elect Joe Biden arrives at the U.S. Capitol for his inauguration as the 46th President of the United States, in Washington, U.S., January 20, 2021.

The ostensible threats, varying in specificity and credibility, according to the source, were predominantly identified online and in chat groups, and are believed to be similar to those intercepted by investigators prior to President Joe Biden’s inauguration on 20 January.

Intercepted messages have purportedly included plots to attack members of Congress during travel to and from the Capitol during the trial. The official added that the investigation was ongoing.

In the wake of the Capitol riots on 6 January, as the joint sitting of Congress had gathered to certify the Electoral College votes confirming Democrat Joe Biden’s victory in the 2020 presidential election, federal officials have been prompted to rethink security in and around the site.

This had also resulted in an unprecedented lockdown set in place on Inauguration Day. More than 25,000 National Guard members from all 50 states were directed to Washington, DC, amid heightened security concerns following the Capitol storming.

Earlier, the FBI removed a dozen national guard members from protecting the inauguration of President-elect Joe Biden and Vice President-elect Kamala Harris after a rigorous vetting process. The event proceeded without incident or any armed protests around the country materializing.

Nevertheless, law enforcement officials are said to be putting in place a plan to deal with the possibility of armed protesters returning to Washington D.C. when Trump's Senate trial begins.

Despite the fact that most of the heightened security measures installed around Washington after the riot and ahead of Biden's inauguration, including scores of additional checkpoints, has been removed, about 7,000 members of the National Guard will remain to assist federal law enforcement, say sources.

With the number of Guard members in Washington DC currently having been slashed to under 20,000 as of Sunday, according to the Guard Bureau, all but about 7,000 of them will be recalled in the coming days.

Troop numbers will continue to gradually dwindle until about 5,000, which are expected to stay in place until mid-March.

When thousands of Trump's supporters descended on the Capitol on 6 January, with at least 800 believed to have forced their way into the Capitol during the siege, police claimed they had been overwhelmed and caught off-guard. The events resulted in five people dead, including a Capitol police officer who hit in the head with a fire extinguisher.

Over 130 people have been charged for their roles in the riot, with at least five people who face federal charges reportedly claiming they believed they were following Donald Trump’s orders when they attacked the building.

© AP Photo / SHANNON STAPLETON
Pro-Trump protesters react amidst a cloud of tear gas during clashes with Capitol police at a rally to contest the certification of the 2020 US presidential election results by the US Congress, at the US Capitol Building in Washington, US, January 6, 2021. REUTERS/Shannon Stapleton

Several people have also been arrested in recent weeks after posting threats against members of Congress, including a Proud Boys supporter who authorities said threatened to deploy “three cars full of armed patriots'' to Washington.

The suspect was said to have threatened harm against Sen. Raphael Warnock, D-Ga., and is accused of stockpiling military-style combat knives and more than 1,000 rifle rounds at his New York home.

Another Texas man was arrested earlier for allegedly taking part in the Capitol chaos and posting violent threats online, including a call to assassinate Rep. Alexandria Ocasio-Cortez, D-N.Y

Former US president Donald Trump is facing impeachment for the second time for the "incitement of insurrection" following the events at the Capitol.

© AP Photo / Alex Brandon
House Speaker Nancy Pelosi of Calif., signs the article of impeachment against President Donald Trump in an engrossment ceremony before transmission to the Senate for trial on Capitol Hill, in Washington, Wednesday, Jan. 13, 2021.

As Majority Leader Chuck Schumer announced on the Senate Floor that the Senate will begin Trump's impeachment trial the week of 8 February, he emphasized:

“It will be a full trial. It will be a fair trial… But make no mistake: There will be a trial, and when that trial ends, senators will have to decide if they believe Donald John Trump incited the insurrection against the United States.”

Donald Trump was impeached by the House of Representatives on 13 January for allegedly inciting his supporters to breach the Capitol building in Washington, DC, on 6 January, to protest the certification of Joe Biden’s win in the 2020 presidential election.

The former president denied the charges, claiming his remarks at a rally on the day of the events were "totally appropriate."

Trump was first impeached by the House on 18 December 2019 for abuse of power and obstruction of Congress after a formal House probe claimed that he had solicited foreign interference in the 2020 presidential election. At the time, the Senate subsequently acquitted Trump of these charges.

The no longer sitting president could still be convicted by the Senate, with a vote that would ban Trump from ever running for office again. A conviction is deemed unlikely, as it will take 67 votes in the 100-seat Senate to convict Trump on the impeachment charges, requiring 17 Republican senators to break rank.