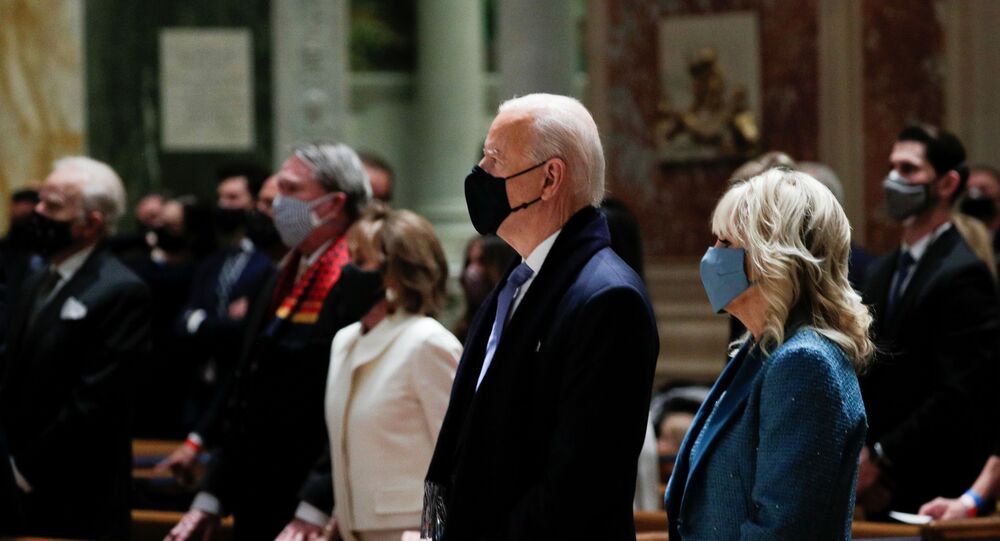 'What About Carter?' NYT Article Slammed for Touting Biden as 'Most Religiously Observant' President

On Wednesday, Biden was sworn in as the 46th president of the United States, becoming only the second Catholic commander-in-chief in American history. The first one was former president John F. Kennedy.

Social media users are buzzing over a recent New York Times article claiming that President Joe Biden is “perhaps the most religiously observant commander in chief in half a century.”

The controversial article, published Saturday, was captioned, “the new president elevates a liberal Catholicism that once seemed destined to fade away.”

Indeed, Biden has been a dedicated parishioner who regularly attends sermons, and even his inauguration day was no exception, as Biden attended Catholic Mass, together with his wife Jill, at the Cathedral of St. Matthew the Apostle. In his inauguration speech, Biden also quoted the Bible when referring to the fight against the coronavirus pandemic: “As the Bible says: ‘Weeping may endure for the night, but joy cometh in the morning.’ We will get through this together!”.

On Sunday, he was spotted at Holy Trinity Catholic Church in Georgetown, attending his first Mass as president.

Nevertheless, netizens rushed to argue that Biden is not the only true believer among the commanders-in-chief, pointing out that former presidents George W. Bush and Jimmy Carter can also be considered deeply religious politicians, and referred to some of their statements in the past.

Also btw the NY Times has apparently never heard of Jimmy Carter, was not only president within the past half century *but is still alive and has a public profile.*

Strangely he can’t pronounce psalms. Even GWB with all of his mispronounced words never did that 🤦‍♀️

There were also those who said religion was irrelevant to them when speaking about the administration, since they judge them by their actions and not based on how deep their faith is.

I will be observant and critical of a Biden/Harris presidency like I would be of any other. Just because they ran as Democrats doesn’t automatically make them “good” or somehow mean the work they do will be what we need.

Many also criticized the author for dividing Christian religion into "liberal": and "conservative", arguing that such definitions are inappropriate and accusing the newspaper of politicizing religion. Others noticed the difference in covering religious Republicans and Democrats.

There is no liberal Christianity or conservative Christianity. There are no gradations of the absolute truth presented in the gospels. There is His word and then there’s everything else. He didn’t tell us he was one of the ways, some variation of the truth, and “a” life.

There is no different , more ‘liberal’ Christianity. That’s merely liberal jargon. You’re either Christian....or you’re not. In many cases, such as this one, it’s a Not.

Lest we forget, the media roundly mocked Amy Coney Barrett's Catholicism. Her adherence to Catholic principle was used to suggest that she was unfit to be a Supreme Court justice. People suggested her large family was extreme and that she adopted her children for show.

At the same time, someone suggested faith is actually a private matter so people shouldn't be judging others for how they practice their religion.

Interesting how people judge other people’s faith/moral core. Let him enjoy mass. It’s nobody’s business whether he follows the catechism line for line. That’s a pretty high bar. At least he believes in something other than his wallet.

Controversy Over Biden's Stance on Abortion

The criticism, however, was mainly attributed to Biden identifying as a Catholic man, while supporting abortion and reproductive rights - something church representatives generally oppose. In particular, the newly sworn-in president is set to reverse the anti-abortion policies of the previous administration, including revoking the so-called “Mexico City Policy”.

The regulation blocks federal funding for NHOs that either provide abortion services or lobby to make abortion legal. Since Ronald Reagan, the regulation has been rescinded multiple times by Democrats and restored by Republicans. Restoring the “Mexico City Policy” was one of the first actions taken by George W. Bush during his presidency.

How can you be for abortion and be Catholic ..?

Only God knows his heart so that’s between them. But his policies aren’t consistent with the teachings of the Bible.

His stance on abortion alone makes him not a Catholic. You can’t have both.

In addition, Biden has vowed to codify the Roe v. Wade court decision into federal law. The 1973 ruling stated that restrictive state regulation of abortion was unconstitutional.

INBOX: @WhiteHouse statement on the anniversary of Roe v. Wade, which legalized abortion nationwide. Biden has promised to work to codify Roe in federal law. pic.twitter.com/EB9rjz4fuo

Earlier this week, the US Conference of Catholic Bishops (USCCB) condemned Biden's abortion and reproductive agenda, accusing him of promoting “moral evils”. At the same time, its president Jose Gomez said that abortions are a “matter of social justice”, noting that it is a practice that is more common among the poor and minorities.

Biden's position on abortion has not been consistent over the course of his career. Back when he was a senator, Biden endorsed the Hyde Amendment, which bars federal funding for abortions unless the pregnancy would endanger a woman's life, or in cases of rape. Biden then believed that faithful Americans should not have to fund abortions that are contrary to their religious views.

The Hyde Amendment, passed by Congress several years after the Roe v. Wade decision, has been strongly criticized by Democrats, who consider it to be a “discriminatory policy,” especially harmful for low-income women and those living in rural areas.

Just two years after Roe v. Wade was adopted, Biden said, “I don’t like the Supreme Court decision on abortion. I think it went too far. I don’t think that a woman has the sole right to say what should happen to her body.”