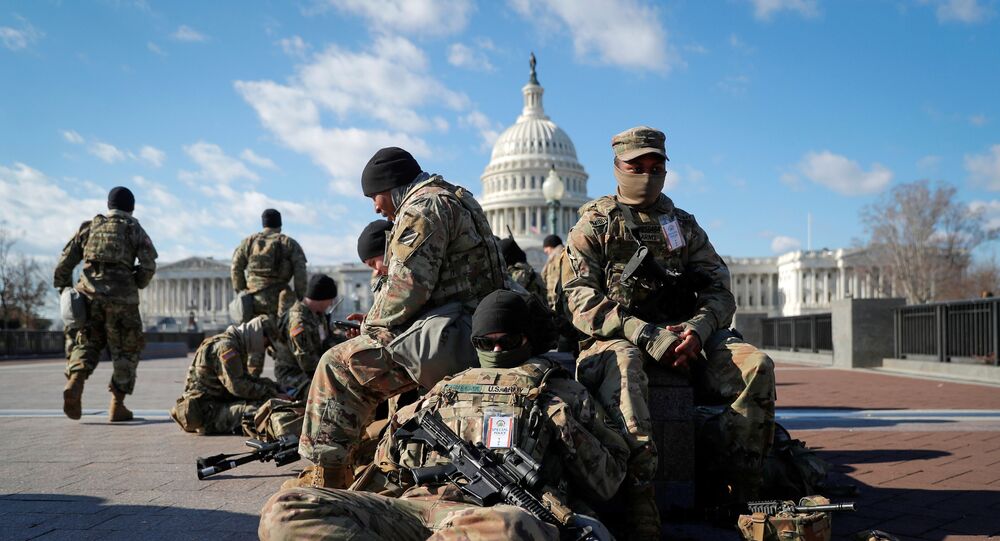 In the wake of the January 6 protests at the Capitol, some 25,000 National Guard troops were dispatched to Washington, following Trump supporters' storming of the building to prevent Joe Biden's victory certification. The fears of mass demonstrations linger, as the House impeached Trump and charged him with "willful incitement of insurrection".

The pending Senate impeachment trial of former President Donald Trump is a security issue that federal law enforcement officials told lawmakers last week that as many as 5,000 National Guard troops would need to stay in Washington until mid-March, Politico reported Sunday, citing sources.

The contingency force will reportedly help defend the Capitol from "impeachment security concerns," including the prospect of mass protests coinciding with the trial of the Senate, expected to start on the week of February 8.

According to the report, the soldiers on the ground have been given few details about the extension has been provided and wonder why they are being forced to endure combat-like conditions without a specific mission in the nation's capital. Up to the beginning of February, about 7,000 troops will continue to provide riot protection, with that number declining marginally to 5,000 by the time Trump's impeachment trial starts.

"We are not going to allow any surprises again," the outlet quotes one Guard member as saying, apparently speaking of the law enforcement's unpreparedness to the events at the US Capitol.

Around 25,000 troops were in Washington by Inauguration Day, where unprecedented security measures were put in place due to fears of nationwide armed demonstrations by Trump loyalists ahead of the event.

© REUTERS / BRANDON BELL
Members of the National Guard stand guard at the U.S. Capitol building during the inauguration of Joe Biden as the 46th President of the United States, in Washington D.C., U.S. January 20, 2021.

Media reported earlier that about 200 troops stationed within the capital area have contracted COVID-19, following several potential super spreader incidents, when guard members were told to work and to stay in close quarters. Gen. Daniel Hokanson told reporters on Saturday, as quoted by ABC News, that less than 200 of the 25,000 National Guardsmen is an infection rate lower than 1%.

"We do everything we can, but we do think that number is low," Hokanson said.

On Thursday evening, reports emerged that National Guard troops guarding the US Capitol were asked to move and sleep in the Senate parking garage. Photos and videos shared by the media show guardsmen sleeping just a few feet away from parked vehicles, while one guardsman reportedly said that his unit was placed in a parking garage with only one bathroom for some 5,000 troops.

National guard troops now have cots to sleep on, rather than having to rest on the cold, marble floors of the U.S. Capitol. pic.twitter.com/6Uk3R4ygxF

The Capitol Police confirmed that troops were asked to reduce shifts from 12 to eight hours and rest between shifts away from the Capitol building but did not explain the decision. A guardsman told Politico that the complaint about some troops seen not wearing masks may have prompted such a decision, while the National Guard Bureau said that relocation was only temporary and linked to a session in Congress.

After criticism of the troops’ treatment ensued on social media, the National Guard members were invited back to the Capitol and nearby hotels.