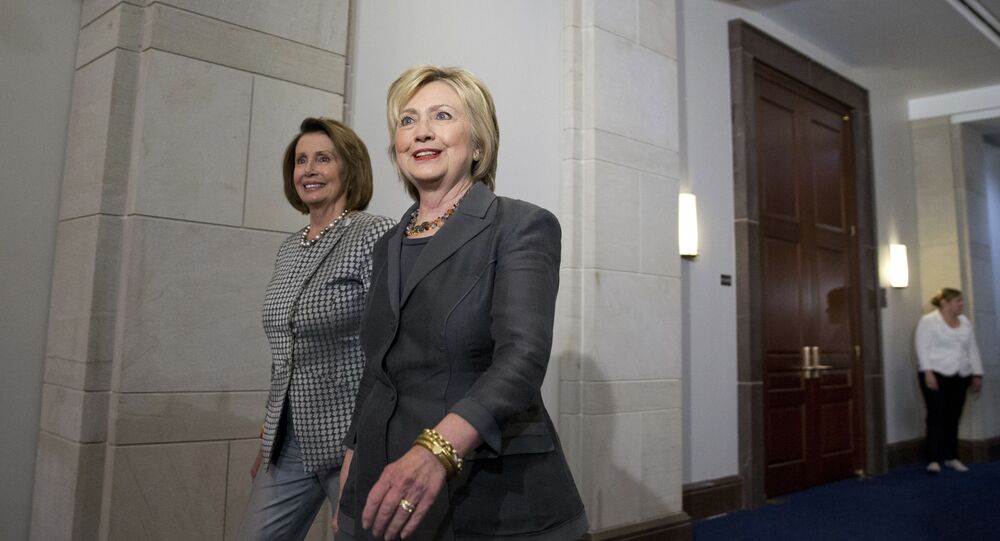 Speaking on Hillary Clinton's podcast “You and Me Both,” House Speaker Nancy Pelosi claimed that there's "strong support in the Congress" for forming a "9/11-style commission" to probe Russia's role in the Capitol protests and Trump's ties to President Vladimir Putin. US observers explain why the narrative is unlikely to gain momentum.

On Monday, Nancy Pelosi and Hillary Clinton suggested in all seriousness that Moscow may have played a hand in the deadly Capitol riots on 6 January, with Clinton claiming that Trump may have even spoken to Putin on the "day the insurgents invaded our Capitol." For her part, Pelosi stated that when it comes to Trump, "all roads lead to Putin," admitting, however, that she has no idea what the Russian president has "politically, financially, or personally" over the former US leader. Neither Special Counsel Robert Mueller's $32-million, nearly two-year investigation, nor Trump's leaked tax files prove anything of this kind.

'A Strange Fixation' With Russia, Putin on the Part of Clinton, Pelosi

"Honestly, I'm not sure why they seem so obsessed with tying Donald Trump to Putin, because we had a very long investigation that lasted over a year, spent millions of dollars," says Aubrey Jewett, a political science professor at the University of Central Florida. "And they literally found no evidence that Donald Trump was in cahoots working with Vladimir Putin. So for whatever reason, both these ladies seem to not want to let that go."

The unfolding situation does appear to be "a bit of a strange fixation with Russia and Vladimir Putin" on the part of Clinton and Pelosi, echoes Matthew Wilson, associate professor of political science at Southern Methodist University.

"It was odd that they would immediately leap to speculate that there must have been Russian involvement in the Capitol unrest," he says, adding that the narrative promoted by the two Democrats is nothing but "pure speculation" which "does seem to stem from a kind of obsession or fixation, that some in the Democratic Party have had about supposed Russian involvement with all things Trump and this is just a continuation of that."

On 31 July, the FBI opened an investigation into the Trump campaign's alleged ties with Russia during the election season, in particular, on the now discredited dossier of Christopher Steele. However, in October 2020, Director of National Intelligence (DNI) John Ratcliffe released handwritten notes by former CIA Director John Brennan concerning reports of Hillary Clinton's alleged July 2016 "plan" to cook up a Trump-Russia scandal in order to divert public attention from her mishandling of classified government documents and unsecured private email server.

The observers don't rule out that now that the Democrats have a majority, albeit a slim one, in both chambers, Pelosi and her party fellows can indeed set up a sort of a “9/11-type commission” to investigate Trump-Russia ties during Biden’s tenure.

"If Nancy Pelosi as Speaker of the House wants to do something within the House, then certainly she can make it happen - because they have the majority in the House of Representatives. So Democrats could set up a commission if they like," adds Jewett.

However, the prof predicts that GOP congressmen will not support Pelosi's initiative and that President Joe Biden will not be in favour of such an investigation: "I think Biden is ready to move on and start his new agenda," he says. "And the thought that somehow Putin is behind many of the things that Trump does. It just doesn't make sense to him. And I think it doesn't make sense to a lot of Americans. Trump does what Trump wants, he's very unpredictable."

"President Biden has made clear that he will not seek to investigate and pursue legal actions against Trump for things that he did while in office," echoes Dr. Michael Pomante, assistant professor of political science at Jacksonville University, adding that the US government has never sought to jail former presidents, and if Biden was to proceed with the new Trump-Russia inquiry it would set "a dangerous precedent."

Yet another possible reason for Biden's alleged distaste for scrutiny into the foreign connections of American political officials is "because of his own family's problems with Ukraine, [and] with China," believes Wilson.

In December 2020, Hunter Biden acknowledged that there had been an FBI-IRS tax investigation over his overseas dealings. In addition to this, "the securities fraud unit in the Southern District of New York also scrutinised Hunter Biden’s finances," according to Politico, which also revealed that from "early last year," investigators in Delaware and Washington were also looking into potential money laundering and Hunter’s foreign ties. Prior to this, The New York Post leaked information allegedly stemming from Hunter's lap top and shedding light on his supposed business deals with Ukrainian and Chinese businessmen during his father's vice-presidency.

Furthermore, the explanation for the Capitol protests' origins offered by Clinton and Pelosi does not fit into the Left's narrative about the incident as "a manifestation of a long brewing far-right domestic extremism that Donald Trump encouraged and gave aid and comfort to," according to Wilson.

"If we shift the attention overseas and say that these are elements that had been fomented from abroad, then to some degree, it takes some element of the blame off of Donald Trump," he notes. "And I think that's not particularly helpful to the narrative that Democrats are most interested in advancing right now."

© REUTERS / JOSHUA ROBERTS
U.S. President Joe Biden addresses the nation at the "Celebrating America" event at the Lincoln Memorial after the inauguration of Joe Biden as the 46th President of the United States in Washington, U.S., January 20, 2021.

It's doubtful that the "Russiagate" narrative will remain relevant under Joe Biden given how many things he has on his plate to worry about, according to Jewett.

Biden has announced a whole set of radical changes  – in many cases reversing Donald Trump's policies – including rejoining the Paris Climate accords, rejoining the WHO, immigration reforms, stopping the building of the border wall, stopping the prohibition of people travelling from about a half dozen Muslim-majority country, and, above all, the $1.9 trillion coronavirus relief plan.

"None of those things have anything to do with Russia and Putin," Jewett underscores. "When Pelosi and Clinton announced that they were considering a 9/11 type commission to investigate further ties between Putin and Trump – not only did conservative Republicans go after them, as one might expect in a party system. But many people in the Democratic Party, particularly from the Left went after them. And I think their line of logic was this – we already investigated this, extensively."

In addition to this, the Democratic camp may be facing trouble as neither Sanders nor Elizabeth Warren – both prominent players – were tapped for meaningful roles in the new government. "It's almost inevitable that divisions will open up between moderate, pragmatic Democrats, and those Democrats who really want to see the country move in a decidedly leftist direction," expect Wilson.

According to him, "it's impossible that the Bernie Sanders and Alexandria Ocasio Cortezes of the world are going to stay on the same page as the Joe Manchins and even Joe Bidens of the world."

For his part, Michael Pomante notes that "the more liberal part of the Democratic Party seem to be buying their time, knowing that the younger population in the US is more diverse and liberal than older members, who will eventually be moving on."