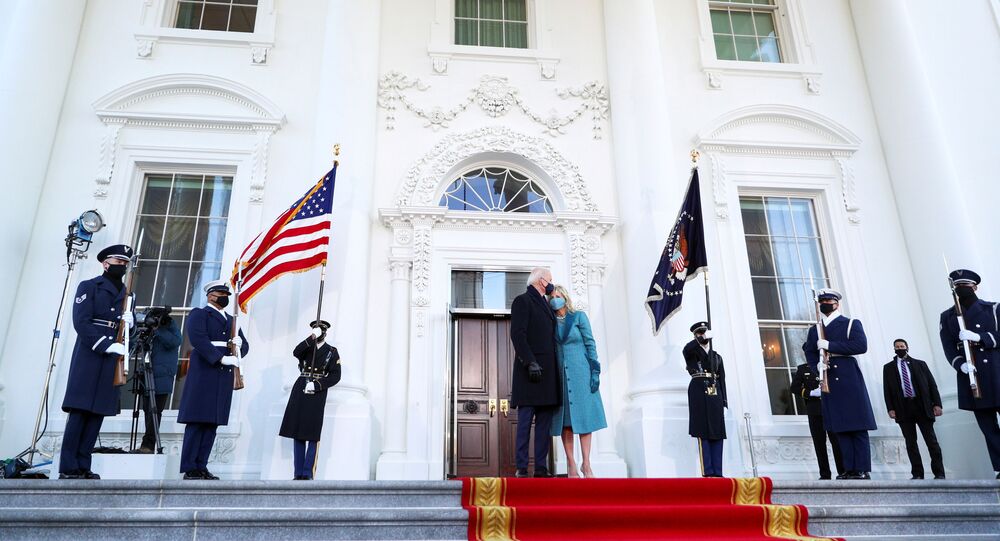 'Baby it's Cold Outside': Bidens Locked Out of White House in Awkward Moment on Residence Steps

The 46th US President and his wife walked up the steps of their new residence on 20 January with a posse of family members in their wake. Joe Biden and his First Lady took a moment to pose for photos and wave to the watching crowd, before turning towards the doors of the North Portico of the White House.

President Joe Biden and his first lady Jill Biden had a chilly moment outside their new residence - the White House - on Inauguration Day.

As the Bidens ascended the steps to the North Portico at 1600 Pennsylvania Avenue on Wednesday, they fleetingly paused for an embrace as photos were taken of the culmination of the transfer of power.

The Bidens at the White House for the first time as President and First Lady.
Pic by Evan Gucci/ AP pic.twitter.com/JEwGLFs7SQ

​​However, as they turned to enter, the doors failed to be flung open. For about ten seconds, Joe Biden could be seen staring in puzzlement at the door before casting a concerned look back at his family members.
Eventually, the doors swung open, yet it was unclear whether someone on the other side had rushed to do so or the couple had pushed them open.

“There was a protocol breach when the front doors were not held open for the first family as they arrived at the North Portico,” Lea Berman, who served as a White House social secretary for President George W. Bush, was quoted as saying by the New York Times.

White House doors are typically opened by Marine guards, yet the chief usher is in charge of greeting the incoming president and his family.

However, Timothy Harleth wasn’t there to greet the Bidens when they arrived because he had been fired around five hours earlier.

Harleth, an ex-rooms manager of the Trump International Hotel in Washington, was quoted as telling the outlet that he had been moving furniture in preparation for the new tenant on Inauguration Day when he was informed at 11:30 am that he was out of a job.

A report had claimed the Bidens' aides previously alerted the White House to the fact that the incoming president planned to bring someone else in to take on the position.

Harleth had been hand-picked by Melania Trump to act as chief White House usher in 2017 ‘because of his impressive work history and management skills.’

​In a statement to the Times, Harleth said:

"It has been an honour to serve as chief usher, a position whose loyalty is not to a specific president, but rather to the institution of the presidency. I am proud that I had the opportunity to lead the residence staff to receive the incoming first family with the utmost respect and dignity, not just for this administration, but for the future success of the office of the president."

Currently, there is no clarity regarding who is to replace Timothy Harleth.

Fox News Host Says Jill Biden is a Doctor 'In the Same Sense Dr. Pepper Is'