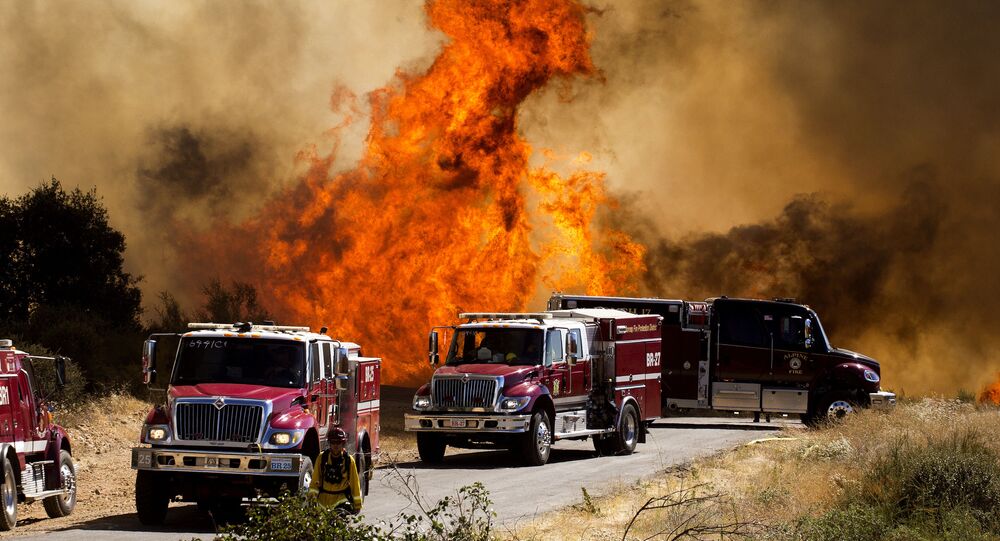 In June 2013 a wildfire killed 19 firefighters at Yarnell Hill in Arizona. Since then there have been hundreds of wildfires every year in the 11 western states of the US and droughts are increasing the risk.

Tackling climate change is high on new US President Joe Biden's agenda and in the western states global warming has been blamed for an increase in wildfires over the last 20 years.

Brendan McDonough, a firefighter who survived the Yarnell fire, wrote in his book, Granite Mountain: "Climate change is increasing both the number and deadliness of wildfires. In 1989 there were about 140 large blazes per year nationwide. Today the number is almost double that. The peak season back then lasted five months. Now it is seven-plus."

He added: "Increased temperatures, earlier snow-pack melt (by a full month) and drier forests are creating these monster blazes called megafires. Some of these infernos can consume nearly an acre of forest every second."

In August 2020 the United States saw its first ever "gigafire", a conflagration in California which burned more than a million acres.

Although there is an assumption the increasing number of wildfires is linked to climate change, this may not necessarily be the case as there is empirical data suggesting North America suffered devastating wildfires long before Europeans settled the West.

Research based on tree ring chronologies suggests the number of blazes in the years 1684/85 and 1748 was many times greater than fires in the 21st century. Since 1879 there was a big reduction in fires..

Dr David Blunck, an associate professor at Oregon State University, explained that "Mother Nature" had a role for fire in renewing forests but when settlers moved West and started farming they began suppressing wildfires.

He said: "Do I think global warming is contributing to it? Oh sure. But I think our behaviour in the past of continually putting out fires has also played a part."

Dr Blunck called for more “prescribed burns” where areas of forest and undergrowth are deliberately burned to protect towns from the spread of wildfires.

Is the increase in #wildfires in the US linked to global warming or is it cyclical? Interesting graph here from @AIRWorldwide pic.twitter.com/1FZq3GvlBO

​He said there also needed to be a “cultural change” among people living in fire-prone areas and also more investment in building code changes which would prevent fire brands - embers drifting in the wind - from setting houses ablaze.

Dr Blunck said: "The cultural mindset if if there is wildfire the firefighters will put it out. But the mindset needs to be to see it more like an earthquake. "It's going to happen and I need to put measures in place to make sure my house is ok'."

Chris Dunn, a research associate in Wildfire Risk Management at Oregon State University’s College of Forestry said: "The solution is to mitigate climate change (which is a fossil fuel consumption issue), but we can adapt. I'd suggest creating a Green Infrastructure program within an economic stimulus bill that creates jobs to restore our western frequent fire landscapes. I’d also suggest focusing on policies that aid increased use of fire as a mitigation tool."

The outgoing head of the Environmental Protection Agency, Scott Pruitt, rejected the scientific consensus on climate change but he did support a Cohesive Wildfire Management Strategy which is designed to combat the danger.

Dr Dunn: “It seems to me most people in leadership roles now recognise climate change is happening, but don’t agree on human induced climate change. I see this as progress, but not in line with the scientific evidence and consensus.”

What is not in doubt is that every year firefighters - including specialist 'hotshots' and 'smokejumpers' - are tackling more and more wildfires.

© AP Photo / Ringo H.W. Chiu
A crew with California Department of Forestry and Fire Protection (Cal Fire) battles a brushfire on the hillside in Burbank, California

Dr Dunn, a former firefighter, said: "We need to address staffing, or workforce capacity. Firefighters cannot sustain this level of engagement year-round. It’s exhausting. Perhaps we should shorten shifts but increase salaries to offset the change from an overtime-driven wage to a livable wage."

Large parts of the West have received less than half their normal rainfall so far this winter.

In parts of Northern California, where this should be the peak of rainy season, wildfire potential is 200% above normal.

We are in a climate emergency. pic.twitter.com/HLKWckot9b

​Dr Dunn said: “Fire managers also need to shift towards the reality that pre-planning is not just about the initial attack, but needs to address extended attack and large fire management. Large fires are so commonplace now that we need to look at the workforce and our engagement with fire fundamentally differently. There was a time when it was appropriate for firefighters to operate out of a separate building in their own fashion, but that time has passed. They are a fundamental component of forest management these days and need to be integrated as such. We need to break down the silos between resource managers and fire managers to plan and implement actions together to achieve the best outcome.”

Six years ago, Arizona lost 19 firefighters in the Yarnell Hill Fire. Today, we remember the bravery of our Granite Mountain Hotshots. pic.twitter.com/QK46Hb2MW4

​John Abatsoglou, an Associate Professor at the University of California, told a recent online seminar: “If we view the scorecard by burn area then what would see the largest increase in fire activity in the next 5-10 years would be a continuation of these unusually warm and dry seasons that predispose these large areas to be flammable for long periods in the summer.”

But it is not just in summer that wildfires are a risk.

Earlier this month the US National Weather Centre predicted: “Mild to warm conditions are expected to hold along the Pacific coast states as gusty winds and dry air continue to elevate the wildfire threat in Southern California.”