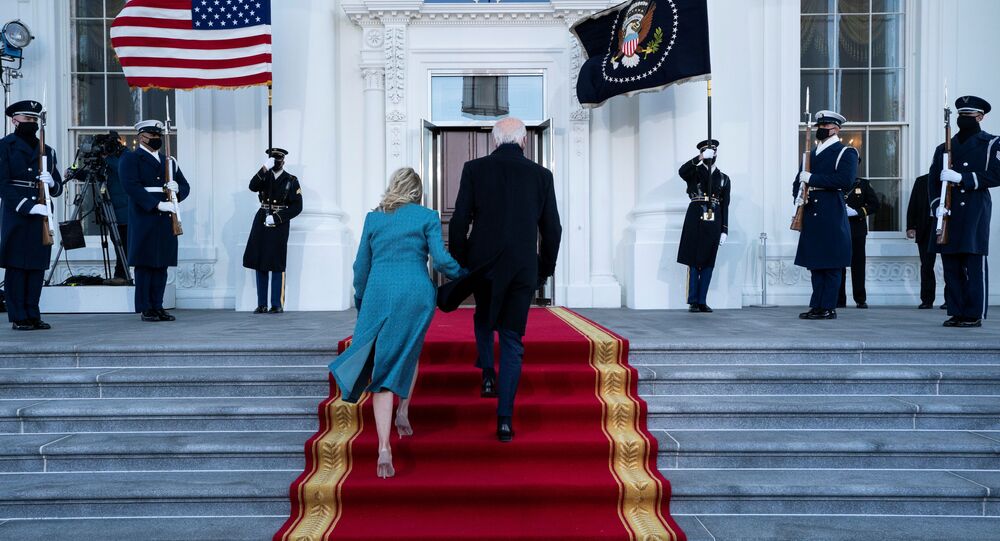 From newly imposed COVID-19 protocols to now-former US President Donald Trump departing the White House without attending the historic inauguration ceremony, the transfer of power between the two presidents was far from the picture of your run-of-the-mill presidential customs.

Despite repeated attempts by Trump and his supporters to prevent US President Joe Biden from taking office, the Pennsylvania-born official was undeterred as he took the presidential oath at the US Capitol and ultimately became the 46th president of the United States.

However, as both Biden and US Vice President Kamala Harris took their oaths, no one could deny the Wednesday event was the polar opposite of past ceremonies, as the nation’s capital remained under lockdown over the possibility of domestic terrorism acts or threats posed by the COVID-19 pandemic.

With the COVID-19 pandemic still in full swing, plans for a traditional inauguration ceremony for the incoming Biden administration were immediately thrown out the window, with officials promptly working up plans for formalities that stayed in line with measures meant to curb the spread of the deadly respiratory disease.

While typical Inauguration Day festivities would see thousands lined along Pennsylvania Avenue and hundreds of thousands of more Americans filling the National Mall to bear witness, the Biden-Harris inauguration was instead limited to a crowd size of about 1,000 individuals, who had to adhere to masking and social distancing efforts.

© REUTERS / Kevin Lamarque
Socially-distanced guests sit during the inauguration of Joe Biden as the 46th President of the United States on the West Front of the U.S. Capitol in Washington, U.S., January 20, 2021.

Instead of the large crowds, the Joint Congressional Committee on Inaugural Ceremonies (JCCIC), which is in charge of planning the day’s festivities, organized an extensive flag display across the National Mall that included an estimated 191,500 US flags and 56 pillars of light to represent the US and its territories as a whole.

© REUTERS / Allison Shelley
The "Field of Flags" and the Washington Monument are seen on the National Mall in front of the U.S. Capitol building ahead of inauguration ceremonies for President-elect Joe Biden in Washington, U.S., January 20, 2021.

As traditional luncheons and inaugural balls held after the ceremony have also been canceled, the organizing committee replaced them with three virtual balls, with one of them being dubbed “We Are One.” Additionally, the day will also include the first virtual inaugural parade to include individuals from all US states and territories.

Acknowledging the impact the COVID-19 pandemic has had on the US, Biden and Harris both attended a tribute at the Lincoln Memorial Reflecting Pool late Tuesday to honor the more than 400,000 Americans who died after contracting SARS-CoV-2, the virus that causes COVID-19.

Exactly two weeks after the deadly Capitol insurrection that attempted to stop lawmakers from certifying Biden’s presidential win, signs of the fruitless siege were hard to miss, even more so as federal authorities doubled down on security measures over concerns of another attack on the building.

Riddled across the National Mall, spectators who were present at the ceremony were surrounded by 12-foot-high fences that were topped with barbed wire and backed by concrete barrier blocks, in addition to the usual street closures the inauguration prompts.

Thousands of National Guard troops were also stationed across the area and lined along the route Biden and company took to before participating in the wreath laying at Arlington National Cemetery.

The presence of Eugene Goodman, a Capitol Police officer who was recorded drawing the mob of Trump loyalists away from the Senate chamber on January 6, also served as a reminder of the events that took place at the Capitol.

© REUTERS / Jonathan Ernst
Officer Eugene Goodman named acting deputy sergeant of arms of the Capitol Police escorts Vice President-elect Kamala Harris as they arrive for the inauguration of Joe Biden as the 46th President of the United States on the West Front of the U.S. Capitol in Washington, U.S., January 20, 2021.

As the acting deputy Senate sergeant-at-arms, Goodman was part of the official escort that accompanied Harris to the platform that was erected ahead of the ceremony. A loud applause broke out when Goodman was seen standing at the arch entryway at the Capitol.

Ahead of the inauguration, security measures were significantly bolstered after federal authorities discovered a multitude of online posts that suggested armed protests would be held across the nation at government buildings, including the US Capitol. Last week, FBI Director Christopher Wray indicated officials had detected an “extensive” trove of posts, but that investigators would be working nonstop to monitor any potential threats.

Although the number of attendees was drastically cut, the group of individuals who made the list stayed largely in line with those who are traditionally spotted at an inauguration.

The ceremony was opened by Sen. Amy Klobuchar (D-MN) and followed by Sen. Roy Blunt (R-MO), who serves as the chairman of the JCCIC and who then introduced Father Leo J. O’Donovan III for the invocation. The inaugural baton was later picked up by Andrea Hall, a Georgia fire captain who led the recitation of the Pledge of Allegiance, Youth Poet Laureate Amanda Gorman and Rev. Doctor Silvester Beaman for the delivery of the benediction.

© REUTERS / Saul Loeb/Pool
Lady Gaga sings the US National Anthem during the 59th Presidential Inauguration at in Washington, U.S., January 20, 2021.

Musical guests at the event included Lady Gaga, who sang her rendition of “The Star-Spangled Banner,” and cowboy-hat-wearing Garth Brooks, who belted out a bare-bones cover of “Amazing Grace.” Jennifer Lopez, who was the second musical guest to appear, offered a medley of “This is Your Land” and “America the Beautiful” that included a reference to her 1999 hit song “Let’s Get Loud.”

Aside from Trump, Jimmy Carter, who is the oldest living former US President, did not attend the inaugural festivities, marking the first inauguration the official failed to attend in person since 1977. According to the Atlanta Journal-Constitution, Carter last traveled to the nation’s capital for an official event in 2018 - for the funeral of former US President George H.W. Bush.

Also at the event were the relatives of Black Americans who died from police violence. Families of Jacob Blake and Breonna Taylor were present and hoped that their trip to Washington, DC, would help the incoming administration to double down on police reform and racial justice, the New York Times reported.

Biden Will Be ‘President for All Americans’

Moments after being sworn in as the next US president, Biden called on Americans across the nation to come together instead of deciding to “retreat into competing factions.”

“We must end this uncivil war that pits red against blue, rural versus urban, conservative versus liberal. We can do this if we open our souls instead of hardening our hearts. If we show a little tolerance and humility,” he said in his first speech as president before pledging to right his predecessor's wrongs.

© REUTERS / Andrew Harnik/Pool
Joe Biden is sworn in as the 46th president of the United States by Chief Justice John Roberts as Jill Biden holds the Bible during the 59th Presidential Inauguration at the U.S. Capitol in Washington, U.S., January 20, 2021.

“America has been tested and we have come out stronger for it. We will repair our alliances and engage with the world once again ... We will lead not merely by the example of our power but by the power of our example."

“It’s time for boldness, for there is so much to do, and this is certain: I promise you, we will be judged, you and I, how we resolve these cascading crises of our era,” he said. Biden also stressed that he would be the "president for all Americans."

Biden, who had unsuccessful presidential bids in 1988 and in 2008, took the presidential oath on Wednesday on a 5-inch thick Bible that has been in his family since 1893. The president previously told late-night host Stephen Colbert in December that “every time I've been sworn in for anything, the date has been on that and is inscribed on the Bible.”

Shortly before the inauguration, Trump clarified on his since-suspended Twitter account that he would not be attending the Biden-Harris swearing-in, adding him to the list of the few American presidents who have opted not to attend the symbolic event.

In a brief farewell speech given at Joint Base Andrews, Trump told the group of individuals in attendance that his administration “accomplished a lot” during the last four years, stressing that “what we’ve done has been amazing by any standard.”

Going off script, Trump remarked that the incoming Biden administration had the “foundation to do something really spectacular,” before remarking that he hoped “they don’t raise your taxes.” In closing remarks, Trump vowed to “be back in some form.”

Although Trump did break from inaugural traditions, he did manage to commit to one aspect: leaving a note to his successor. It’s unclear what message the letter contains.

Since leaving the White House, Trump has relocated to Mar-a-Lago, his resort in Palm Beach, Florida, that the former president has deemed his new place of residence.