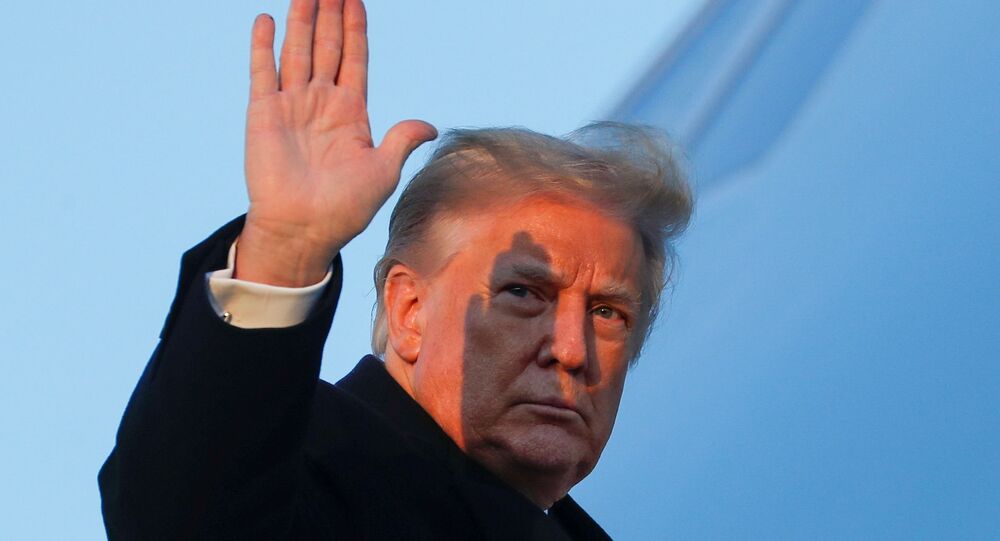 'Patriot Party': How Could Trump Capitalise on His 75-Million Base After Leaving the White House?

Donald Trump is reportedly considering forming a new "Patriot Party", The Wall Street Journal reported on 19 January, citing people familiar with the matter. US academic Dr Djene R. Bajalan has weighed up the potential party's odds of outpacing Democratic and Republican competitors and upsetting the balance of power in the US.

Donald Trump has discussed the formation of a new party with his associates in the last few days in a bid to play a role in the political arena after he leaves the White House, according to The Wall Street Journal.

The report came on the heels of several senior Republicans, including Senate Majority Leader Mitch McConnell (R., Ky.), chastising Trump for the 6 January Capitol incident, claiming that it was provoked by the president. While GOP leaders have turned their back on the outgoing president, polls show that Trump continues to retain strong support among Republican voters.

While Donald Trump is capable of kick-starting a new political movement, it is unlikely that a new Patriot Party will be very successful in electoral terms, believes Dr Djene R. Bajalan, political analyst and professor of history at Missouri State University.

He draws attention to the fact that although there are already a number of political parties in the United States, including the Green Party, the Constitutional Party, and the Libertarian Party, none of them has proven successful enough in US political races.

During a stop at Joint Base Andrews in Maryland, on the way to his Mar-a-Lago resort, Trump told a crowd of his supporters that he "will be back in some form". “I will always fight for you. I will always be watching. I will be listening”, he added.

Feeling Betrayed by the GOP

Trump's motivation behind the "third party" plan is crystal clear, according to the political analyst: he is feeling betrayed by the establishment of the Republican Party. Many senior GOP politicians did not support his claims that the election was rigged.

While a number of Republican representatives and senators signalled that they could challenge the election results on 6 January, Mitch McConnell reportedly urged his caucus not to sow discord after the Electoral College voted for Biden. In the aftermath of the Capitol protest, many GOP senators who had floated the idea of opposing the certification reversed their objections. One of them was Sen. Kelly Loeffler, R-Ga, who promised Trump in person to object to the Electoral College vote. "The events that have transpired today have forced me to reconsider and I cannot now, in good conscience, object", she said following the Capitol breach.

"[Trump] feels that he has been kind of cast aside by the Republican Party establishment and wants to get some kind of revenge on them", suggests Bajalan. "He thinks the Republican Party is no longer a useful vehicle for him. And also, I think, you know, with Trump and his sort of business sense he might think of it as a way to, perhaps, monetise some of his political supporters".

For its part, the Republican Party is seemingly done with Trump as well, according to the academic. While the GOP was happy to support Trump when he came out on top in 2016, "he has proven to be quite unsuccessful in winning elections for the Republican Party", which gradually lost the House, the White House, and the Senate by 2021. "Many Republicans are looking for Trump to disappear from the political scene, because they see him as an obstacle to the future of the party", the professor suggests.

He expresses doubts that even those high-profile Republicans who have been loyal to Trump would join his new party. This includes his supporters like Ted Cruz, or Josh Hawley, who would not be willing to leave the Republican Party since it remains the vehicle for their political advancement, according to Bajalan.

© REUTERS / LEAH MILLIS
Senate Majority Leader Mitch McConnell leaves the Senate floor as he and the rest of the U.S. Senate face a decision over approving $2,000 stimulus checks on Capitol Hill in Washington, U.S., December 30, 2020.

Trump May Siphon Off Part of GOP Voters

Although the potential Patriot Party is unlikely to gain enough political weight to be on par with the well-established Democratic and Republican parties, Trump may still inflict damage on the GOP, the professor presumes.

"It might have an impact in that it might siphon off enough of Republican voters, even if it's only 5 or 10% of Republican voters, it will have a very damaging effect for the Republican Party, if it is a fact", he suggests. "American politics is very finely balanced. Any swing in voters and any shift in turnout can be very damaging for one political party or the other. So, it may not be very successful as a political party, but it could have an impact as a party that could weaken the position of Republicans in elections".

On the other hand, one shouldn't delude oneself into believing that all 75 million who voted for Trump in 2020 would cast their ballots in his or his party's favour, should he throw his hat in the ring, deems Bajalan.

Meanwhile, the 13 January NBC News poll indicated that the outgoing president's approval rating holds steady despite the media fuss over the Capitol Hill incident and possible impeachment: he received a positive job approval rating of 43% from all registered voters participating in the survey including 87% from the Republicans. In October 2020, his approval rating stood at 45% among potential voters and 89% of the GOP electorate.