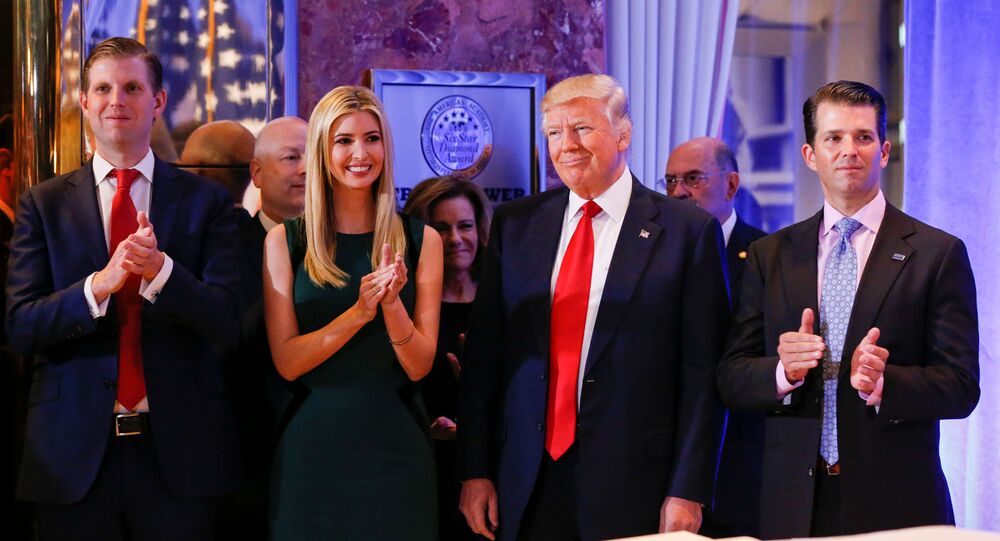 Psychologist and author Mary Trump has long been known as an ardent critic of her uncle, the outgoing president. She blasted him for being "psychologically incapable" of running the country, saying his personality was shaped to a great extent by his "sociopathic" father. POTUS hit back at the claims, arguing she is in no position to make judgments.

Mary Trump, the outgoing president's niece, has persisted in her long-running rant against her relative, charging that his adult children "need to be shut out" of politics and "contained" once a new administration takes the reins of power.

During an interview with the "MeidasTouch Podcast", she was asked to comment on reports that Ivanka Trump, who has been serving as her father's senior adviser on social and employment issues, would likely have a go at her own political career, and for instance, run for the Senate in the coming years.

"One of the reasons that I hate them so much is that we have to have conversations about them, which should be absurd. It should be a joke", Ms Trump, a staunch critic of her uncle, fumed, although without directly mentioning Ivanka or her multiple siblings.

Trump, a businesswoman and psychologist, went on to assert that "it's entirely up to us", "not just Donald".

"They [Trump's grown-up children] need to have all of their assets stripped away from them. It all needs to be burned down ... their brand needs to be totally destroyed even more than they've already destroyed it", Mary Trump said, apparently alluding to the blow dealt to the family's reputation in the wake of the 6 January attack on Capitol Hill by Trump supporters.

Ms Trump further explained her position, recounting how a number of corporations and entities had already halted business ties with the Trump Organisation, such as New York City. She also said the Trumps should "be doing nothing but defending themselves against judges".

She persisted in her stinging remarks, saying he has shown how people "with resources and connections" manage to "rehabilitate or stay in the game when they should have been discarded a long time ago".

This is not the first time Mary Trump has made damning remarks about her uncle, whose personality she claims to know well from him and his loved ones. In her recent tell-all memoir "Too Much and Never Enough", Mary Trump outlines Donald Trump's childhood and their interfamily relationship, scrutinising how it could have affected his character traits.

She alleged that the attitude of Donald's father, Fred Trump Sr., whom she labelled as being "a high-functioning sociopath", played a part in Donald's upbringing, limiting his emotional intellect and psychological capacity.

POTUS himself dismissed the allegations Mary Trump made in her book, saying that she was a "seldom seen niece" who knows little about him and was speaking "untruthful things" about his parents.

Donald Trump's political future was cast into doubt when last week he became the US president to be impeached twice.

If the Senate later moves to convict the outgoing president on the single impeachment article brought against him – "incitement of insurrection" - in connection with the Capitol siege that took place shortly after he took the floor at a rally in Washington, DC, it will prevent him from running for any federal office ever again.