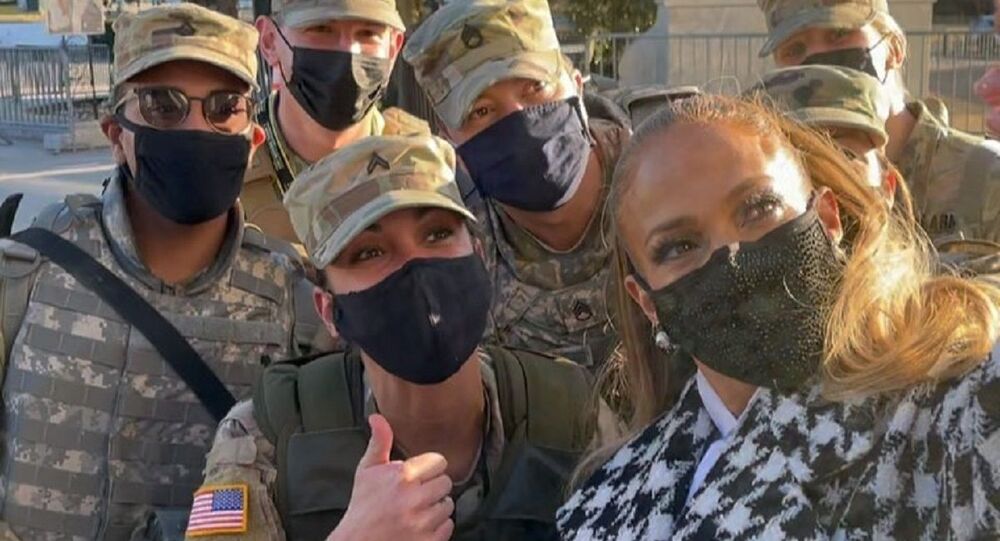 Lady Gaga, J-Lo, and star couple John Legend and Chrissy Teigen are expected to be among the guests of the celebrity-studded inauguration.

Tuesday night saw the finishing touches applied ahead of Democrat Joe Biden's big day, as he is set to be sworn in as the 46th president of the United States.

The event will enjoy quite a fair bit of star presence, although this year's inauguration will be on a far lesser scale than in previous years due to the still raging coronavirus epidemic.

Among the celebrities performing at the ceremony will be Lady Gaga, who is expected to sing the "The Star-Spangled Banner", according to Variety. Gaga has of late been a fixture in Joe Biden's campaign.

Another musical legend to hit the stage is Jennifer Lopez, who will give a musical performance she rehearsed on Tuesday night before posing for her photographer on the iconic steps of the Capitol building.

The vocal powerhouses will be joined by their colleague, singer John Legend and his wife, model Chrissy Teigen, as well as Youth Poet Laureate Amanda Gorman, set to read out an original poem called "The Hill We Climb".

The president-elect's solemn speech from the inaugural platform on the West Lawn is designed to set the tone and outline the policies of his administration, making good on the promise inherent in the general theme of Wednesday's event – "America United".

Meanwhile, security is running on high on Capitol Hill and its vicinity, with at least 25,000 National Guard troops and multiple checkpoints stationed there to maintain law and order, with the Secret Service, which is in charge of the upcoming big event, declaring it is already prepared. The increased security measures come in response to the recent attack on Capitol Hill, when a mob of demonstrators from a Trump rally moved to storm the federal legislature on 6 January.

In past inaugurations, participants would traditionally don their tuxedos and ball gowns for numerous inaugural balls and galas scheduled around the country.

This year, regional Democratic parties and advocacy groups will hold Zoom balls, with the inauguration itself due to be attended by a limited number of guests, seated on socially distanced chairs.

The National Mall in Washington will be completely closed to the general public, with just a tiny amount of the tickets usually distributed for an inauguration due to be available. However, to single out those who cannot attend, about 200,000 small US state and city flags have been installed on the Mall.

© REUTERS / CARLOS BARRIA
Thousands of U.S. flags are seen at the National Mall, as part of a memorial paying tribute to the more than 200,000 people nationwide who have died from the coronavirus disease (COVID-19), near the U.S. Capitol ahead of President-elect Joe Biden's inauguration, in Washington, U.S., January 18, 2021

Virtual parades and feature performances will be aired from around the country. The inaugural committee says the programmes will include musical acts, local bands, poets, and dance troupes. A special emphasis will be placed on paying tribute to Americans that have been on the front line of the coronavirus pandemic.

The event, set to be attended by a number of ex-presidents including Barack Obama, George W. Bush and Bill Clinton and their better halves, will be snubbed by Donald Trump, who will become the first president to do so since Andrew Johnson in 1869.