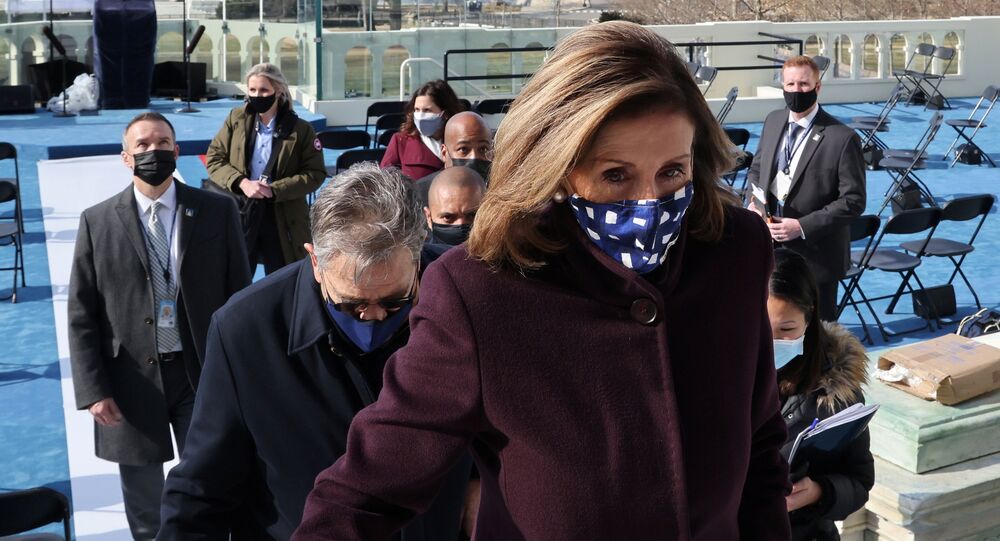 Pelosi also vowed that the article of impeachment against Trump will "soon" be sent to the Senate to initiate a trial, but declined to elaborate on the exact date. She spoke after the House moved to impeach the US president in a 232 to 197 vote last week.

US House Speaker Nancy Pelosi has claimed that President Donald Trump could be considered "an accessory" to murder in light of violent events in Washington, DC on 6 January.

At the time, POTUS supporters stormed the US Capitol in an attempt to prevent Congress from certifying the 3 November presidential election results, violence that claimed the lives of at least five people.

In an interview with the US network MSNBC on Tuesday, Pelosi repeatedly hit out at Trump over his alleged role in instigating the 6 January riots, saying a "president's words are important. They weigh a tonne".

"And they used his words to come here", the House Speaker added, apparently referring to the developments of 6 January, when Trump called on his supporters to march to the Capitol in a speech at a "Save America" rally shortly before they breached the building.

In subsequent tweets, however, POTUS urged protesters "to go home now" and pledged that those who broke the law "will pay".

Pelosi, for her part, said during the MSNBC interview that if there is a proof that some members of Congress collaborated with Capitol protesters, they - as well as the US president - could be dubbed be accessories to crimes committed during what she described as "insurrection".

“And the crime, in some cases, was murder. And this president is an accessory to that crime because he instigated that insurrection that caused those deaths and this destruction”, Psaki argued

She also focused on the impeachment proceedings against Trump, pledging that the House will send the relevant article to the Senate "soon" so as to initiate a trial.  The White House has not commented on Pelosi's remarks yet.

© AP Photo / Eric Risberg
Pelosi Urges US Military Chief of Staff to Stop Trump From 'Ordering a Nuclear Strike'
Last Wednesday, the House moved to impeach the US president in a 232 to 197 vote that was preceded by Pelosi insisting that POTUS "must go".

Pelosi additionally asserted that Trump had "incited an armed rebellion against our common country", saying this constitutes sufficient grounds for his removal from office.

The US president, in turn, denied the accusations, condemning the move to impeach him as "absolutely ridiculous" and a "continuation of the greatest witch hunt" in the history of US politics.

Pelosi Moves for Impeachment in Final Days of Trump Administration