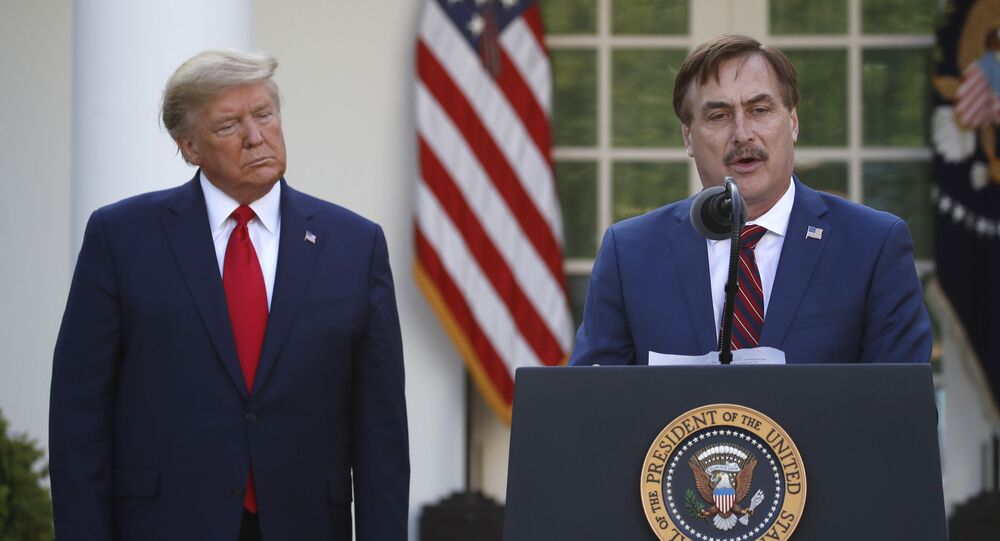 Businessman Michael James Lindell, CEO of My Pillow, Inc., was threatened with "imminent" litigation from Dominion Voting Systems, whose lawyers demand Lindell make a public apology following "false and conspiratorial" claims about the company rigging the 2020 US presidential election in US President-elect Joe Biden's favor.

Speaking to Right Side Broadcasting Newtork's Brian Glenn, Lindell confirmed Saturday that Bed Bath & Beyond and Kohl's were among the many major retailers to cease selling his My Pillow products.

Lindell, who notably overcame a crack cocaine addiction alongside the infomercial growth of My Pillow, asserted that the physical retail companies were simply "scared" to display his product for sale in the current political climate.

“These [companies], they’re scared, like a Bed Bath & Beyond, they’re scared. They were good partners. In fact, I told them, ‘You guys come back anytime you want,'" the 59-year-old claimed.

Lindell's trip to the White House last week gained viral attention after high-quality photos showed him entering the White House with a collection of papers, one of which clearly referenced "martial law." The viral images prompted concerns from netizens fearing a military-imposed, last-stitch move to retain power by the outgoing US president.

CNN's Jim Acosta noted that Lindell's meeting with Trump lasted approximately 5 minutes. The My Pillow CEO denied that "martial law" was written on his widely-seen documents.

I am honored to be invited to speak at the biggest event in DC history! @realDonaldTrump will be our President for the next 4 years!!! pic.twitter.com/GoyzsGa6Rx

The embattled businessman may also face legal backlash from Dominion. The electronic voting hardware and software company served Lindell with a letter requesting he cease and desist from making damaging claims about Dominion's role in his allegations of widespread election fraud.

The document in question demands Lindell “preserve and retain all documents relating to Dominion and your smear campaign against the company.”

Dominion is also calling on the 59-year-old to issue a public apology and official retraction of past election-related allegations.

“Dominion has been forced to expend substantial monetary sums to protect the health and safety of its employees following innumerable death threats from the social media mob that your statements have agitated against Dominion," the company claimed in a statement obtained by CBS Minnesota. "And your misrepresentations have required the company to incur substantial attorneys’ fees and to mitigate the damage you have inflicted upon Dominion’s reputation."

Twitter has flagged a number of Lindell's election-related tweets in recent days, such as a January 15 tweet alleging China and Russia hacked the presidential election.

Here are the pages of the machine voter fraud evidence that came out last week and the media including Twitter has tried to bury it! This is an attack on our country! pic.twitter.com/FhpNgNSda7

Members of the Election Infrastructure Government Coordinating Council (GCC) Executive Committee, including those from Trump's fledgling Cybersecurity and Infrastructure Security Agency, have maintained since their November 12 announcement that "there is no evidence that any voting system deleted or lost votes, changed votes, or was in any way compromised."

Nevertheless, Lindell noted in a Monday CBS interview that such lawsuits would be met with "evidence" exposing "the horrific things that these [Dominion voting] machines are capable of and what they did to our country."

"They’re allowing other countries to steal our election and just to hijack our election," he contended.

Scientists Hope to Soon Have Clues About What Mars Sounds Like