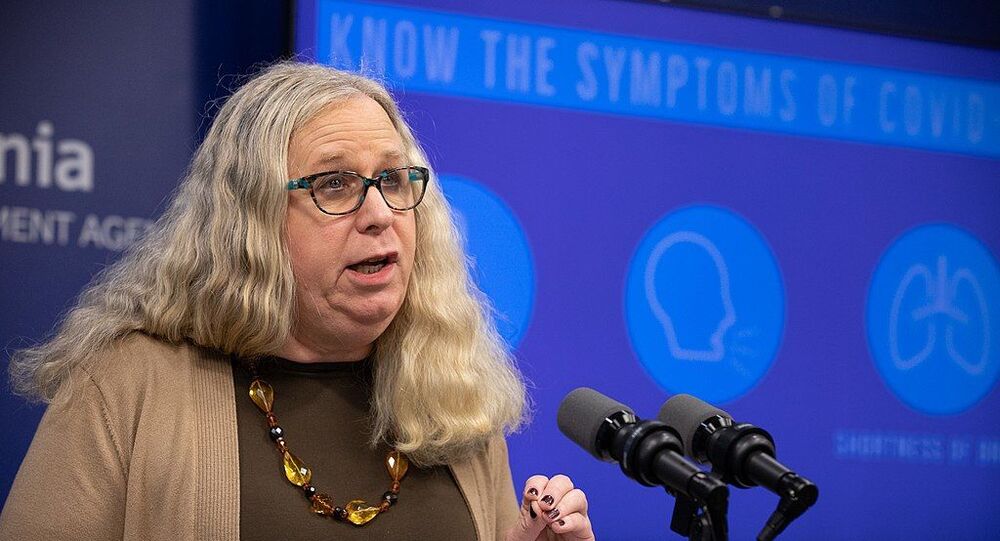 Under the outgoing administration of US President Donald Trump, the Department of Health and Human Services (HHS) was one of several departments to overturn discrimination protections established for LGBTQ people by his predecessor, Barack Obama.

On Tuesday, US President-elect Joe Biden announced he intended to nominate Rachel Levine to be his assistant secretary of health, one of the most powerful positions in the department. If confirmed, Levine will be the first transgender person appointed to such a high position in the federal government.

“Dr. Rachel Levine will bring the steady leadership and essential expertise we need to get people through this pandemic - no matter their zip code, race, religion, sexual orientation, gender identity, or disability - and meet the public health needs of our country in this critical moment and beyond,” Biden said in a statement. “She is a historic and deeply qualified choice to help lead our administration’s health efforts.”

A pediatrician by trade, 63-year-old Levine has been the Pennsylvania State Secretary of Health since 2017, where she has headed that state’s effort to fight the COVID-19 pandemic. She was previously the state's physician general from 2015 to 2017. She studied medicine at Harvard University and Tulane Medical School, and taught at Mount Sinai Medical Center in New York, where she was chief resident.

In her position as the Keystone State’s top doctor, Levine has massively expanded the state’s fight against the opioid epidemic, which she has called “a medical condition” and a disease. It is not a moral failing.” Under Levine’s tenure, opium-based painkiller prescriptions have fallen in Pennsylvania and she has implemented reforms to help people addicted to opioids to slowly wean off the drug instead of turning to the black market.

However, she has also garnered criticism for the state’s slow reopening of society following the COVID-19 lockdowns in the spring of 2020, and her policies have been blamed for spreading infections in nursing homes and other elderly care facilities. She was also heavily criticized for taking her 95-year-old mother out of such a facility during the pandemic, although Levine noted at the time that she was following her mother’s wishes.

One of Few Transgender Public Officials

Levine is one of the few trans people to hold public office in the United States and has weathered constant attacks from the public and other political figures in the state due to her gender identity.

After a local carnival took a shot at Levine by comparing her to a man in drag who featured in a dunk tank event last year, Pennsylvania Governor Tom Wolf defended Levine, decrying the “vile acts” and how they further fanned the hate directed at trans people across the state. In 2020, at least three Black trans women were killed in gruesome murders in Pennsylvania, including one woman, 27-year-old Rem'mie Fells, whose body was dismembered and stuffed in a suitcase before being thrown in the Schuylkill River.

Still, Levine told the Washington Post in 2016 that “with very few exceptions, my being transgender is not an issue.” She has been confirmed three times by Pennsylvania's Republican-controlled state Senate.

Mara Keisling, the executive director of the National Center for Transgender Equality, hailed the decision. “President-elect Biden said throughout his campaign that his administration would represent America,” she told the Washington Post. “Today, he made clear that transgender people are an important part of our country.”

Many of Biden’s picks for high-level federal positions have come from minority groups, many of whom would become historic firsts if confirmed for the positions in question. For example, Biden has nominated a gay man and former presidential primary rival, Pete Buttigieg, to be his secretary of transportation, and Gen. Lloyd Austin, a Black man who formerly commanded all US forces in the Middle East, to head the Pentagon. His vice president, Kamala Harris, is the first woman, first Black person, and first South Asian person to hold the position.

Under the Trump administration, which ends on Wednesday when Biden is sworn in, the DHHS was one of several federal government departments and agencies to implement major policy changes that rolled back discrimination protections for LGBTQ people, in particular transgender people.

In October 2018, the New York Times reported, citing an internal memo the paper had obtained, that DHHS was spearheading a major effort alongside the Department of Justice and Department of Education to redefine the word “sex” in their policies as exclusively referring to sex assigned at birth. Under the Obama administration, the word had been interpreted to include not just transgender people, but lesbian, gay and bisexual people as well, arguing that discrimination against them came from sex-based stereotypes about sexuality and identity.

The Trump administration’s move has affected institutions that segregate people according to sex, including prisons and homeless shelters, as well as sex-based anti-discrimination protections in various civil rights laws. However, the effort received a major blow in June 2020, when just after DHHS finalized rules changes to the Affordable Care Act that would have allowed anti-LGBTQ discrimination based on religious belief, the US Supreme Court issued a stunning ruling in which it said that discrimination against LGBTQ employees is sex-based discrimination.

Civil rights advocates have argued the Supreme Court’s ruling is sweeping, as it effectively validates the Obama administration’s reading of the word “sex” in civil rights laws. Biden vowed in the weeks immediately prior to the November 2020 election that if elected, he would pass LGBTQ-specific civil rights legislation within his first 100 days in office.

Biden won the election and is expected to be inaugurated as president on January 20. However, Trump has refused to acknowledge Biden’s victory and according to the US House of Representatives, which impeached him last week for inciting an insurrection, Trump urged his followers to attempt to block certification of Biden’s victory by Congress on January 6. Five people died in the subsequent storming of the US Capitol, but while Congress was temporarily dispersed, they later reconvened and certified the results.