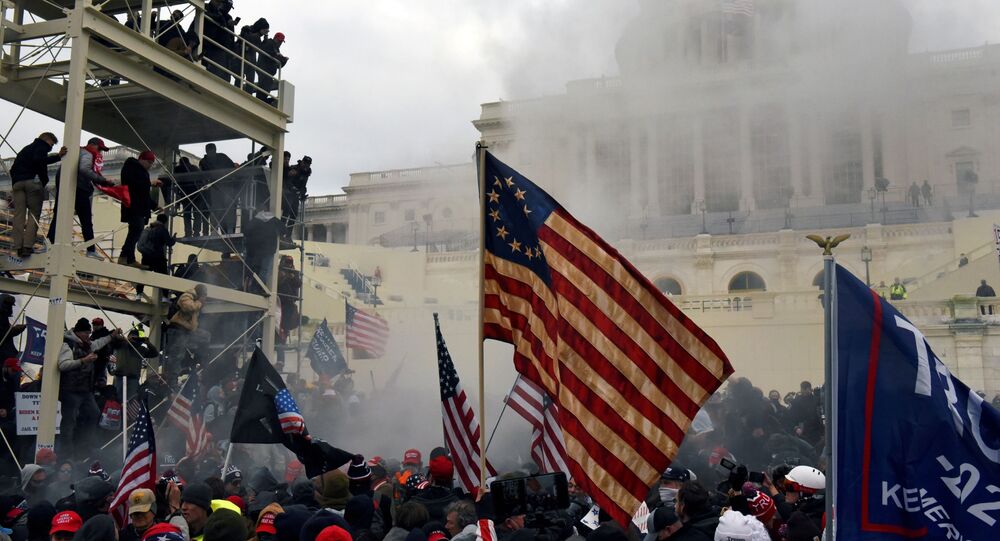 Unlike most of the Democrats and some Republicans, the former member of the Trump administration refrained from shifting the blame for the 6 January riots on to POTUS. Instead, he suggested that special investigators should determine who caused "unacceptable" behaviour of the crowd.

The former head of the US Department of Justice, William Barr, has suggested in an interview with Britain's ITV News that the debates over election fraud allegations "precipitated" Capitol riot that took place on 6 January. Although the former Attorney-General supported US citizens' intention to use their First Amendment rights, he stressed that what happened on the Capitol Hill had little to do with it and was "unacceptable".

Despite referring to the election fraud claims, blamed by, among other people, Donald Trump as a probable cause of the storming of the Congress building, Barr stopped short of blaming his former boss for what happened on 6 January answering a direct question from the reporter. He stressed that the level of Trump's culpability in this event should be determined by the investigators.

Barr suggested that the protesters resorting to "violence" was "inevitable" from his point of view. The former AG cited a number of factors that contributed to this outcome.

"I think that when you start suppressing free speech, when people lose confidence in the media, and also when they lose faith in the integrity of elections - you are going to have some people resort to violence", Barr said.

It is unclear what episode Barr referred to by mentioning the suppression of the free speech, but his statement comes in the wake of President Trump condemning Big Tech for trying to "silence" him after his social media accounts were either banned or suspended for an indefinite period of time. The social media giants Twitter and Facebook justified their move by claiming that Trump's use of their platforms could incite a new spiral of violence in the country, suggesting that his actions led to the Capitol riot.

© REUTERS / Scott Morgan/Files
'It Will Destroy The Party': Rand Paul Warns Republicans Will Leave if GOP Senators Back Impeachment

Democrats, as well as some Republicans, also accused Trump of inciting "insurrection", introduced a respective article of impeachment to the House floor and successfully passed it last week. Trump is now facing trial in the US Senate, which is due to reconvene on 19 December – a day before the balance of power shifts in the upper chamber in favour of the Democrats.