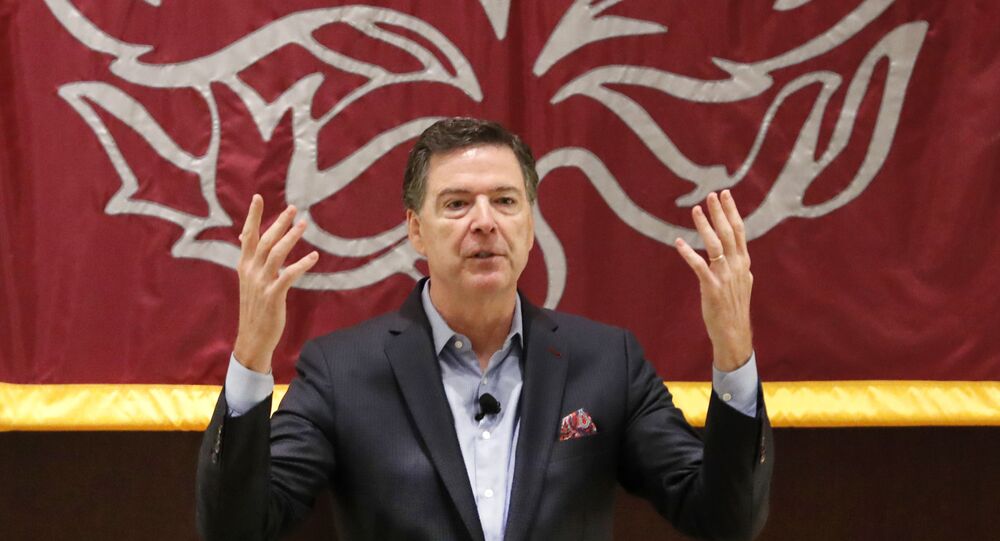 The former head of the bureau was fired by Trump back in 2017 on recommendations from US Attorney General Jeff Sessions and his deputy over Comey's handling of the case of Hillary Clinton's use of a private email server during her tenure as secretary of state.

Former chief of the FBI James Comey has said in an interview with The Guardian that he was "sickened" by the sight of the Capitol being stormed by pro-Trump protesters, calling the incident a "9/11-size failure" and comparing it to the Chernobyl nuclear disaster.

The ex-FBI head elaborated on his shocking comparison by claiming that the US has always been a "radioactive stew" of violence and racism housed in a containment building of law and kept in check by the "control rods" of cultural expectations. Comey went on to claim that Trump had by his actions weakened the containment building and withdrawn the control rods, which are otherwise responsible for preventing an uncontrolled chain reaction in nuclear reactors.

"What Donald Trump has done for the last five years is attack the building from the outside to weaken its foundation. […] He’s withdrawn the control rods, and that’s a recipe for a nuclear disaster, a radioactive release. That’s what you saw on Capitol Hill, our own Chernobyl, when the ugly radioactive violence and racism of America explodes in public view", the former FBI head claimed.

Comey further stated that the 6 January riot, which he called a "near-death experience" for US democracy, requires a probe into its underlying cause akin to the 9/11 Commission. At the same time, the ex-FBI chief cautioned against trying to convict Trump in federal courts in a "blockbuster" trial, arguing that it would only hurt the country. He instead suggested trying POTUS in New York courts over his alleged acts of bank and insurance fraud before assuming the presidency.

Comey served as the head of the FBI for four years before being fired by Trump in May 2017. The decision was justified by a recommendation POTUS received from his Attorney General Jeff Sessions and the latter's deputy Rod Rosenstein. The two recommended that Comey be dismissed over his handling of the investigation into Hillary Clinton's use of a private email server for work needs during her tenure as secretary of state. Trump later said that he would have fired Comey anyway even without a recommendation from the attorney general.

POTUS has repeatedly expressed displeasure with the fact that Clinton was never tried for her misconduct. The FBI's probe, which became public shortly before the election in 2016 and arguably tanked the Democrat's chances of winning, found that Clinton had been "extremely careless" in her handling of emails, but ultimately recommended against bringing charges against her.

Department of Justice Inspector General Michael E. Horowitz probed Comey along with other FBI agents over potential bias when opening a Russia probe against Donald Trump's campaign and carrying out surveillance on some of its members. While Horowitz concluded that the Russia investigation had been conducted with numerous violations, he found no signs of bias in the actions of James Comey or other FBI agents.

Trump Has ‘Menace of a Mob Boss’, But Shouldn't be Prosecuted, Says Ex-FBI Boss Comey