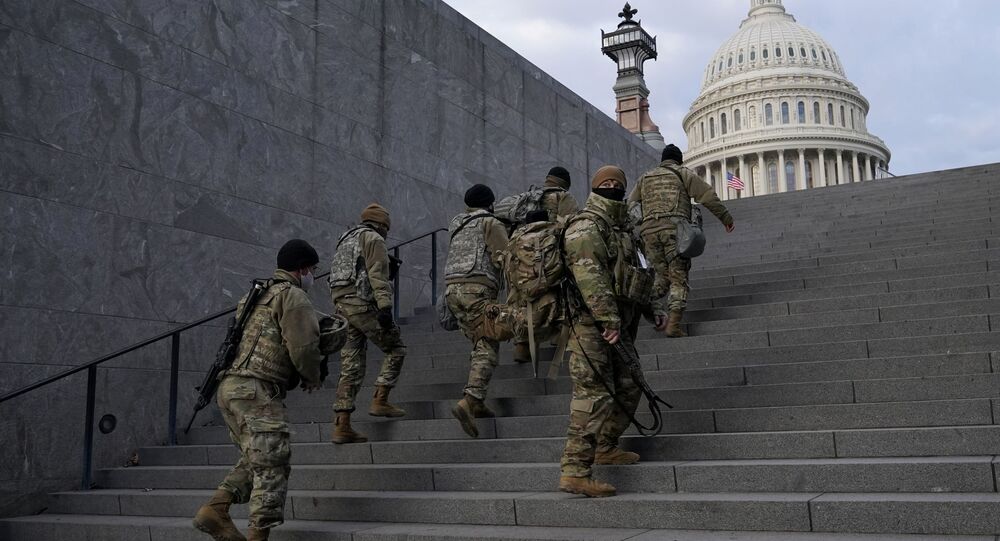 On Monday, the acting Pentagon chief pledged to leave "no stone unturned in securing the Capitol" in Washington, DC as time ticks down for President-elect Joe Biden's inauguration.

QAnon adherents "discussed posing as US National Guard soldiers" to try to infiltrate the upcoming inauguration of President-elect Joe Biden, The Washington Post has cited an FBI intelligence report as saying.

The report pointed out that QAnon members believed "it would be easy for them to infiltrate secure areas" during the swearing-in ceremony, adding "concerns of lone wolf actors are [also] increasing". The FBI has not commented on the matter yet.

QAnon is a conspiracy theory alleging that US President Donald Trump is fighting a cabal of Satan-worshiping, deep-state elites that includes politicians such as Hillary Clinton and investor George Soros, as well as Hollywood stars, who together run a massive child sex-trafficking ring and cannibalistic cult.

Other ideas the group reportedly spreads are that the COVID-19 pandemic is a hoax or that industrial bleach is an effective treatment for the coronavirus.

The alleged FBI warning about QAnon adherents comes a day after acting Defence Secretary Chris Miller said in a statement that the Pentagon had not received any intelligence information about a potential insider threat to the Biden inauguration.

He added that the Department of Defence is "leaving no stone unturned in securing the Capitol", and that all National Guard troops deployed to Washington, DC will be vetted.

"We appreciate the support of the FBI in assisting with this task and for each of the more than 25,000 Guardsmen who answered their nation's call and rapidly deployed to the [National Capital Region]", the Pentagon chief stressed.

Reports earlier emerged that the Pentagon had called on the FBI to vet National Guard troops in Washington, DC amid allegations participants in the 6 January Capitol siege could have been helped by those assigned to protect the building for Joe Biden's inauguration.

This was preceded by FBI Director Christopher Wray last week stating that they were monitoring "all incoming leads, whether they're calls for armed protest, potential threats that grow out of the 6 January breach of the Capitol, or other kinds of potential threats leading up to inaugural events and in various other targets".

The statement came amid reports that the FBI is bracing for armed protests planned in all 50 state capitals across the country in the run-up to Biden's inauguration on 20 January.

In another development last week, acting Chief of the Metropolitan Police Department Robert Contee told reporters that more than 20,000 soldiers from the US National Guard will be on hand in Washington, DC to help secure Joe Biden's inauguration.

Defence Department officials, for their part, said that the National Guard troops directly involved in securing the Capitol complex and deployed elsewhere in the Washington area, "would not be far" from their arms.

© REUTERS / JOSHUA ROBERTS
WH to Hold Farewell Ceremony for Trump Before He Leaves DC Early on Inauguration Day - Report
At least five people died in the Capitol riots, when Trump supporters stormed the federal legislature on 6 Janaury in a bid to disrupt congressional certification of the 3 November presidential election results.

The developments were followed by Democrats' push to launch new impeachment proceedings against President Donald Trump and invoke the 25th Amendment to remove POTUS from office. The US president slammed the efforts as a "hoax" and a "continuation of the greatest and most vicious witch hunt" in US history, adding that the 25th Amendment is "of zero risk" to him.

View of Washington, DC as Rehearsal for Biden’s Inauguration Interrupted Over Fire Scare