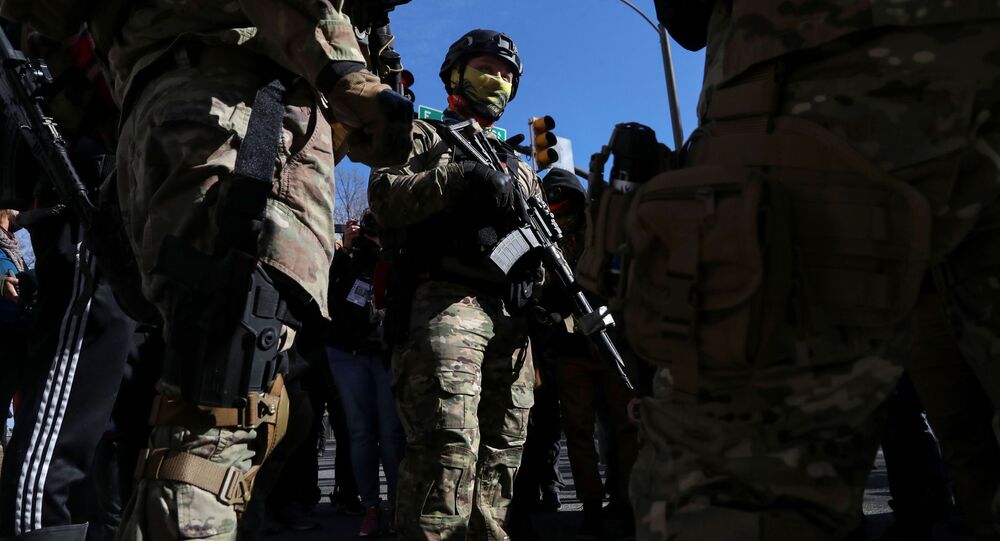 RICHMOND (Sputnik) - Dozens of armed protesters from groups like the Proud Boys and the Boogaloo Bois are rallying in support of the Second Amendment near the Capitol building in Richmond, Virginia, a Sputnik correspondent reported on Monday.

The Capitol was closed off days ago in anticipation of protests. Likewise many streets are shut down, and a heavy presence of law enforcement can be seen on the ground.

The protesters are wearing masks and many have rifles.

The gathering of gun rights activists known as 'Lobby Day' takes place every year and aims at raising concerns with lawmakers.

This year, the event has gathered much smaller numbers due to the pandemic and the tense atmosphere in the country ahead of the inauguration of President-elect Joe Biden.

The protest has remained peaceful amid security concerns across the United States after the January 6 events in the country’s capital.

© AFP 2021 / Jeenah Moon - Pool
Pentagon to Vet Guardsmen Deployed to DC But Sees No Sign of Insider Threat, Secretary Miller Says
Last week, the US Defense Department said that it would provide 25,000 troops, an unprecedented number, to support the Biden inauguration on Wednesday in the wake of the Capitol riots.

On January 6, pro-Trump protesters stormed Capitol Hill in a bid to prevent Congress from certifying the presidential election victory. At least five people, including a female air force veteran, were killed and some 170 cases have been opened by police in connection with the riots. The US House of Representatives impeached Trump last week for inciting the riot.