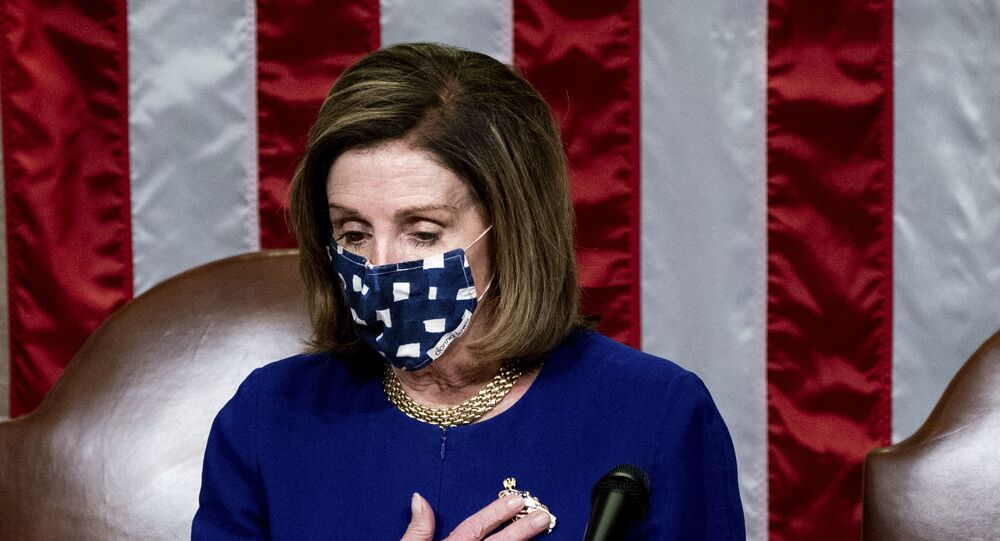 So Not Trump After All? Senator Graham Suggests Speaker Pelosi to Blame for Capitol Storming

The Democrats earlier put all the blame for the 6 January storming of the Congress building on President Donald Trump, claiming that his speech at the "Stop the Steal" rally provoked the protesters. POTUS, however, was among the first to condemn the act and call on the demonstrators to remain peaceful.

Republican Senator Lindsey Graham has suggested that House Speaker Nancy Pelosi bears at least part of the blame for pro-Trump rioters successfully breaching into the Capitol building on 6 January. The senator claimed that Pelosi failed to provide necessary security for the Congress building to prevent that from happening.

"To see people come and take over the Capitol […] beat officers, defile the seat of government. How in the hell could that happen? Where was Nancy Pelosi? It is her job to provide Capitol security", Graham stated in the course of his interview with Fox News.

Graham presumably referred to Pelosi's authority to oversee the Capitol's Sergeant-at-Arms, who is responsible for security at the House wing of the Capitol, among other things.

The Republican Senator went on to stress that the president accepted his share of responsibility in the events on 6 January, which claimed the lives of four protesters and one Capitol Police officer. Trump condemned the actions of the rioters in an address released soon after the incident, but later stated that "people" had analysed his speech at the "Stop the Steal" rally, which predated the storming of the Capitol, and found his words "appropriate". POTUS did not elaborate on who these people or media were.

The Democrats, however, have shifted all the blame for the events, which delayed the certification of election results, on Trump, alleging that his speech at the rally provoked the protesters to storm the Congress building. The House Democrats, led by Pelosi, introduced an article of impeachment to the lower chamber floor accusing the president of inciting insurrection and successfully passed it last week, making Trump the only US president to have been impeached twice. He is still to face trial at the US Senate, which will reconvene no sooner than 19 January.