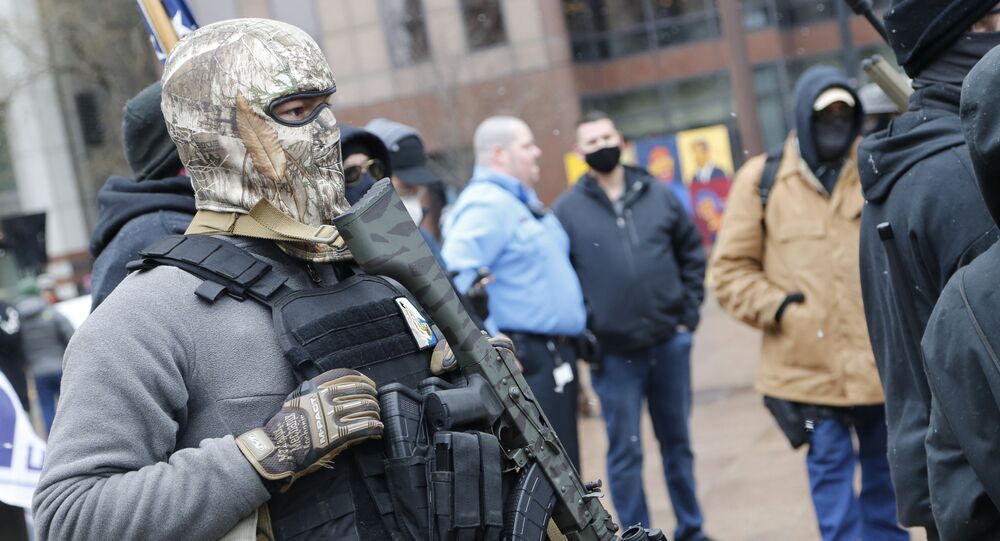 Statehouses across the US have beefed up security in a bid to prevent a scenario of possible civil unrest as the clock ticks down to the 20 January inauguration of President-elect Joe Biden.

No arrests were made after about 50 demonstrators armed with assault rifles and other firearms gathered near the Ohio State Capitol on Sunday afternoon, the CBS News-affiliated TV channel WBNS reports.

Ohio is an open-carry state, something that allows its citizens to visibly carry a firearm in public places.

Both Trump supporters and counter-protesters, with at least one of them carrying a Black Lives Matters flag, were reportedly seen in the crowd before the action wrapped up later on Sunday.

Striking to see the armed protesters in their tactical gear right next to the troopers and members of the Ohio National Guard. @nbc4i pic.twitter.com/V4asLtwqWL

The rally saw some demonstrators escorting a "Liberty or Death" flag to the statehouse in Columbus, an event that was preceded by Ohio Governor Mike DeWine authorising the deployment of up to 580 National Guard members to secure government buildings in the Buckeye State in the run-up to President-elect Joe Biden's inauguration on 20 January.

A trucker dancing for peace while two dozen armed protesters and hundreds of law enforcement stand by at the Ohio Statehouse pic.twitter.com/rWXycxwgtG

The Ohio rally came as media reports said that about 20 armed demonstrators held a rally outside the Michigan statehouse in Lansing on Sunday, to protest Democrat Joe Biden becoming the 46th US president.

The gathering peacefully ended by 3 p.m., with Michigan State Police Lt. Brian Oleksyk telling the Detroit Free Press that they "want to make this [the Capitol in Lansing] a safe environment for people to come down here to express their constitutional rights".

"But we are prepared to protect this building as well as the people that are here. We're not going to tolerate any type of violence, any type of destruction of property, any assault to police officers (or) other people here expressing their constitutional rights, as well as the media", Oleksyk stressed.

He spoke after the Pentagon last week authorised up to 15,000 National Guard personnel to be deployed to Washington, DC to support law enforcement before and during Biden's inauguration.

This came amid reports that the Federal Bureau of Investigation (FBI) is bracing for armed protests being planned in all 50 state capitals across the country in the days ahead of the 20 January event.

The reports followed the US House of Representatives voting on 13 January to impeach Donald Trump for a second time over "incitement to violence". The initiative was preceded by claims from House Democrats and some Republicans that Trump instigated the deadly 6 January riots. US House of Representatives Speaker Nancy Pelosi will reportedly send the article of impeachment to the Senate later this week.

POTUS, for his part, hit out at what he slammed as "the impeachment hoax", which he said is "a continuation of the greatest and most vicious witch hunt in the history of our country and is causing tremendous, anger, division, and pain, [...] which is very dangerous for the USA".