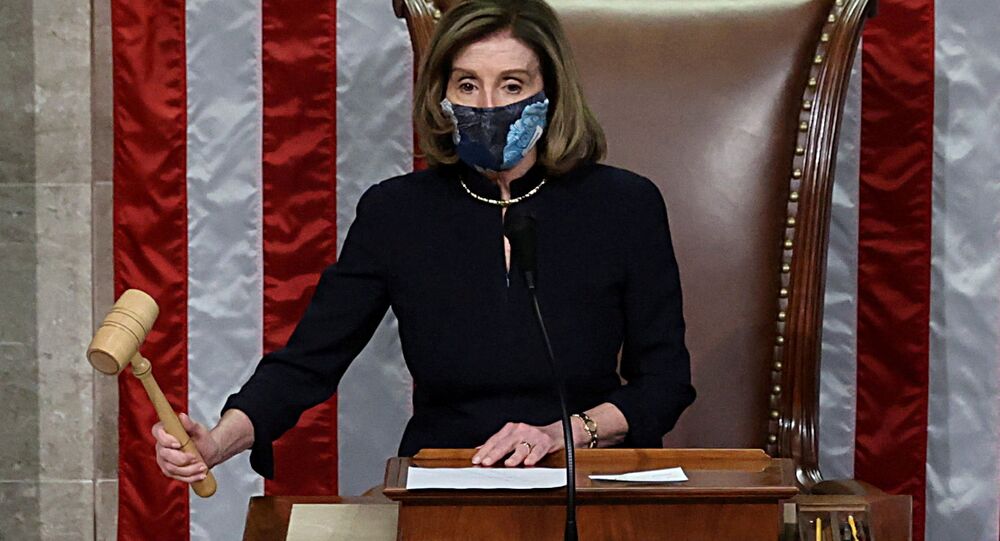 The woman is wanted for taking part in the Capitol riot on 6 January, which left five people dead and the Congress building ransacked. She was identified on one of the videos of the riot on social media, but has since fled from her hometown and is apparently lying low.

Pennsylvania care worker Riley June Williams is being investigated by the FBI over alleged involvement in stealing either a laptop or a hard drive from the office of House Speaker Nancy Pelosi during the 6 January riots, according to an affidavit published by the bureau. The allegation is based on the account of Williams' former "romantic partner", who was identified as W1 in the document.

© Photo : screenshot
A screenshot of the FBI affidavit regarding alleged theft of a hard drive or a laptop from the office of House Speaker Nancy Pelosi during the 6 January riots in Washington DC.

W1 claimed to have been shown by the woman's friends videos on which Williams is purportedly stealing "a laptop computer or hard drive" from the office of the House speaker. According to the FBI affidavit, W1 also claimed, citing the woman's friends, that the Pennsylvania care worker was planning to send the device to a friend in Russia, who would then try to sell it to the country's intelligence service. For unknown reasons the plan had failed, the witness claimed.

The FBI witness suggested that Williams was either still in possession of the device or destroyed it.

The woman has not been charged so far on W1's allegations as the bureau is still looking into them. She is, however, wanted in relation to her participation in the 6 January riot and storming of the Capitol. Williams was earlier identified on one of the videos taken inside the building on that day by the British broadcaster ITV. On the ITV footage, Williams was seen urging fellow rioters to go "upstairs". According to the FBI, she was directing them towards the office of the House Speaker.

Although the warrant for Williams' arrest has already been issued, she reportedly fled her hometown of Harrisburg - Pennsylvania's state capital. Local law enforcement questioned her mother, who claims Williams packed a bag and told her she was leaving town for a couple of weeks without providing details of the trip. The woman also purportedly deleted her social media profiles.

Williams is one of many rioters, who are either wanted or have already been arrested over their storming of the Congress building. The riot took place soon after the "Stop the Steal" rally organised by President Donald Trump in Washington DC on the day the Congress was due to certify the election victory of Joe Biden. Giving a speech, POTUS once again refused to cede and urged Republican congresspeople to oppose the election results' certification. The president also repeated his election fraud claims and demanded an investigation into the matter.

The Democrats, as well as some of the GOP, accused Trump of inciting insurrection, which led to the deaths of four protesters and one Capitol police officer. Trump rejected the accusations and was among the first to condemn the violence in a Twitter statement. His account has since been banned on the social media platform (as well as his account on several other services), and Trump was impeached by the House for the second time in his single term over the alleged responsibility for the unrest. The Senate has yet to decide whether he will be convicted.